The global 3D printing plastics market size was estimated at USD 335 million in 2017. It is projected to register a CAGR of 24.9% from 2018 to 2025. Ease in customized product development, coupled with favourable government investments, is likely to boost the growth of the market over the coming years.In addition, rising demand from Application industries such as automotive and aerospace is anticipated to stoke market growth.

Recent developments in the additive manufacturing industry have opened new avenues for the automotive industry. It has facilitated development of innovative, stronger, lighter, and safer components and parts with lesser lead times as well as costs. OEMs mainly utilize 3D printing for rapid prototyping. Thus, expansion of the automotive industry is poised to keep the demand for 3D printing plastics high over the coming years. 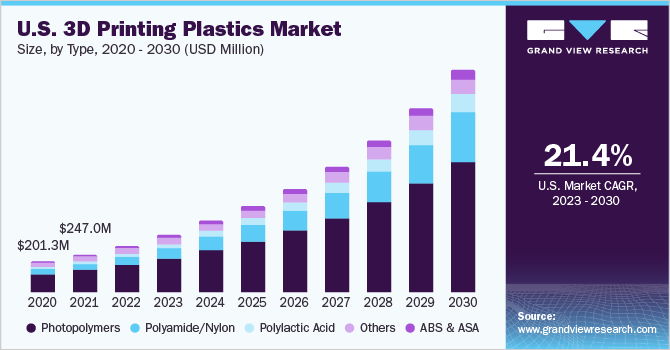 Rapid advancements in various materials and technologies are helping the market gain traction. In addition, ability to produce tools, prototypes, fixtures, and other finished products through utilization of additive manufacturing will further stimulate the demand for 3D printing plastics.

3D printing or additive manufacturing is considered highly efficient as compared to various other traditional manufacturing methods. It enables production by reducing time, efforts, and costs incurred in a project. Moreover, it does not even require specialized tooling to create a prototype. Additive manufacturing also avoids several tooling related constraints for geometries.

3D printing plastic filaments dominated the market in terms of revenue in 2017. They are manufactured and marketed in two diameters only, which includes 1.75mm and 3mm. Their versatile properties coupled with surge in demand from several application industries such as food packaging, tableware, upholstery, and disposable garments are estimated to drive the demand during the forecast period.

3D printing inks are projected to witness promising growth during the same period on account of ongoing research & development activities as well as investments to develop smart inks. These inks enable 3D printed structures to change their shape as well as colour, thereby enhancing their functionality. Moreover, researchers are focusing on developing low cost options to manufacture critical parts in application areas such as biomechanics and energy.

There is a high demand for 3D printing plastics in the aerospace industry. Increasing aircraft manufacturing for defence and commercial purposes is likely to contribute to the growth of the segment. Military aviation is anticipated to witness a decline in terms of revenue on account of reduction in military expenditures in several countries, while commercial aircraft production is poised to flourish on account of boom in passenger air traffic. Airbus Group’s A350 and Boeing’s Dreamliner are among the most popular aircraft fleets witnessing demand in the aviation industry.

Medical was the largest application segment in 2017. 3D printing plastics offer benefits such as cost effectiveness and ease in customization. Growing incidence of vascular and osteoarthritis diseases is playing an imperative role in the growth of the segment. Moreover, improved technology, favourable government support, and rapid product development are expected to stir up the demand for 3D printing plastics in medical applications.

Photopolymers was the most prominent plastic type segment in the 3D printing plastics market in 2017. The segment is likely to maintain its position in the market through 2025. Photopolymers are soluble liquid mixture of monomer, polymer base, and oligomers along with a photoinitiator. They are lightly sensitive polymeric materials, which when exposed to light, change their physical as well as chemical properties. Ultra violet rays initiate reaction and change properties of photopolymers. They are extensively utilized in various printing technologies, including inkjet, polyjet, and 3D jetted printing. 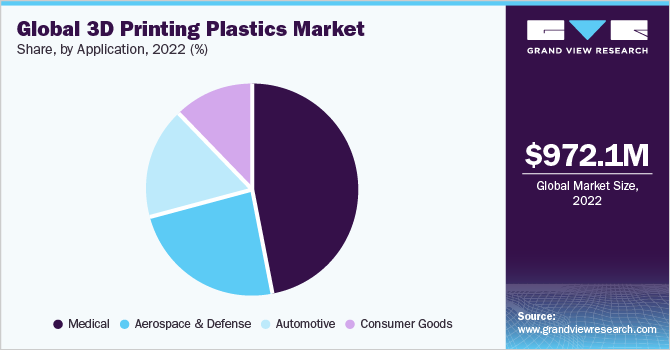 Polyamide/Nylon is likely to post the highest CAGR of 28.5% during the forecast period. Nylon is also called polyamide (PA). Nylon 6 and Nylon 6, 6 are two different grades of nylon, consisting similar ratios of hydrogen, oxygen, nitrogen and carbon. Nylon consists of a comparatively higher melting point, which allows it to become an ideal material to be used in several applications. In addition, it contains strong oxygen barrier properties, thus making it suitable for combination with other materials that do not possess good gas resistance, such as paper.

North America was the leading revenue contributor in the global arena in 2017, accounting for a revenue share of over 40.0%. Asia Pacific is estimated to be the most promising region during the forecast period owing to booming automotive and medical manufacturing industries in emerging economies such as India and China.

North America comprises of matured markets and is characterized by a technologically advanced 3D printing industry. Lack of capital investment and dearth of skilled labour in the additive manufacturing industry are projected to limit the growth of the market. Rise in merger & acquisitions, increasing investments in R&D, operation integration, and site relocations are escalating the growth of the market for 3D printing plastics in North America.

In April 2018, Stratasys Ltd. added Antero 800NA, a PEKK-based high performance thermoplastic, to its product portfolio of 3D printing materials. The material is ideal for manufacturing lightweight parts and would assist in attaining increased profit margins.

This report forecasts revenue and volume growth at global, regional, and country levels and provides an analysis of the industry trends in each of the sub-segments from 2014 to 2025. For the purpose of this study, Grand View Research has segmented the global 3D printing plastics market report on the basis of type, form, application, and region: