The global activated bleaching earth market size was valued at USD 2.4 billion in 2014 and is projected to expand at a CAGR of 5.2% over the forecast period. Increasing vegetable oil and fats production in emerging countries of Asia Pacific and Central and South America is expected to remain a key driving factor in the market over the forecast period.

Activated bleaching earth is widely used in the refining, decolorizing, and bleaching of edible oil and fats. Demand for the product is high in Asia Pacific countries such as Indonesia, Malaysia, China, and India. Favorable government regulations and policies in these countries have a positive influence on the market growth. 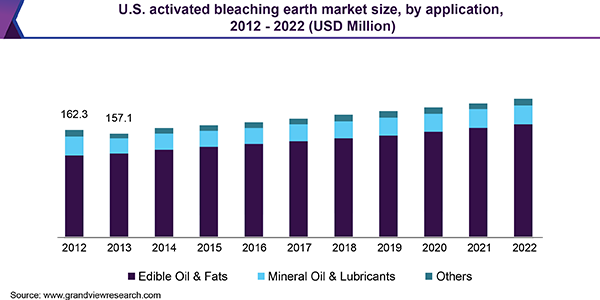 Growing acreage and yield of oil seed crop and technological developments in the production process have remained the key driving forces in this industry. Growing demand for biofuel, which is derived from vegetable oil, is also one of the factors influencing the demand for activated bleaching earth, particularly in the developed countries. Adoption of healthy eating habits and consumption of low fat oil are expected to drive the market in North America and Europe. The market is highly fragmented due to presence of a large number of small players competing on the basis of price and quality.

Supply of specialized or customized activated bleaching earth grades as per the specification of end-users is expected to create new avenues for key industry participants. Certifications such as Halal, Kosher, and HACCP provide a competitive advantage to the players. The mineral oil and lubricants segment accommodates the use of activated bleaching earth in insulating, lube, rolling, and paraffin’s and waxes. Use of this product in recycling waste lubricants is expected to drive its application in this segment.

Factors such as growing consumption of edible oil by countries such as India and China and rising demand for decolorized and highly purified low fat oil in developed as well as developing countries are expected to boost the demand for activated bleaching earth. Increased use of vegetable oil in manufacturing biofuels is also projected to contribute to a significant demand for product in the edible oil and fats segment. 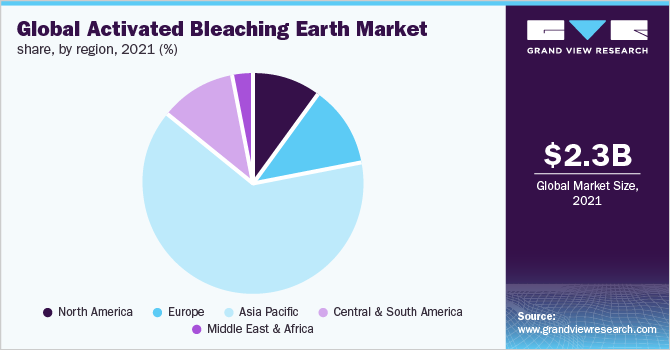 Malaysia and Indonesia are the world’s largest producers of edible oil. Therefore, demand for activated bleaching earth from these countries is projected to grow in proportion to the demand for edible oil over the forecast period.

Asia Pacific led the global industry accounting for above 60% share of the overall volume in 2014. The growth is attributed to growing production as well as consumption of edible oil and fats in China, India, Malaysia, and Indonesia. Rising acreage and yield has doubled the oil seed production around the world in the past few years. This, in turn, is expected to increase the output of edible oil globally.

Malaysia and Indonesia are the largest producers of vegetable oil. Oilseed crop production is expected to rise in these countries as activated bleaching earth is widely used in the processing and refining of edible oils, thereby positively impacting market growth in Asia Pacific.

Central and South America is characterized by increasing production of vegetable oil in countries such as Argentina and Brazil, which is expected to contribute to the growth of the activated bleaching earth market.

The market growth in Middle East and Africa is influenced by edible oil and fats production in countries including Turkey and South Africa. However, growth of the mineral oil and lubricants industry is also projected to drive demand for activated bleaching earth in this region.

Companies such as Clariant International AG adopted acquisition, expansion, and investment strategies to enhance their product portfolio and expand into emerging markets. Joint ventures and technological collaborations were adopted by Ashapura Perfoclay Limited to surge the market penetration and cater to the technological requirements of various end-use applications in the region.