The global adhesion barrier market size was valued at USD 695.5 million in 2019 and is projected to witness a CAGR of 7.1% during the forecast period. The key drivers of the market are the rising geriatric population coupled with the increasing number of surgical procedures. The rising incidence of invasive surgeries with a high risk of postoperative complications is triggering the growth. However, with the rising risk of post-operation adhesion, the market is still witnessing barriers in terms of accessibility, lack of health education, and lack of awareness about the importance of treatment. 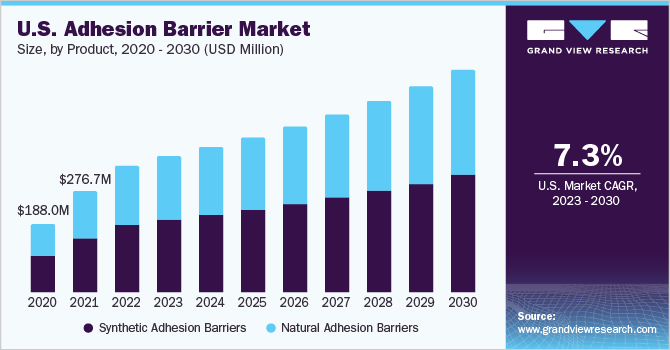 Improvement in healthcare infrastructure and the increasing availability of trauma care centers are expected to drive the growth. Moreover, increasing incidences of sports-related injuries are also contributing to the market growth. According to Stanford Children’s Health, there are approximately 30 million children who participate in some form of sports, and out of this more than 10% have injuries each year. Also, according to the Centers for Disease Control and Prevention (CDC), there were 51.4 million orthopedic procedures performed in the U.S. in 2015. The rising number of orthopedic procedures is expected to have a positive impact on the demand for advanced adhesion barriers.

Increasing incidence of neurological disorders, gynecological disorder, ophthalmic disorder, and cardiac disorder have also contributed in propelling the market growth. According to the British Heart Association, there are 7.4 million people living with circulatory and heart diseases. Heart and circulatory diseases accounted for approximately 27% of all deaths in the U.K. in 2019. Thus, the treatment of these disorders requires surgical interventions at certain times, increasing the demand for adhesion barriers.

Furthermore, rising healthcare expenditure coupled with rising FDA approval for various adhesion barrier products is also adding growth to the market. For instance, in March 2018, the SurgiWrap film adhesion barrier from Keir Surgical received approval from Health Canada for sale in Canada. In addition, favorable reimbursement policies and the rising awareness about various surgical interventions are boosting market growth over the forecast period.

The natural adhesion barriers segment also accounted for considerable market share in 2019 and is expected to grow at a lucrative rate during the forecast period. The segment is further divided into collagen and protein, and fibrin. The collagen and protein segment held the largest market share in 2019 owing to its benefits such as durability and safety. The fibrin segment is expected to grow at a rapid pace during the forecast period. The high growth rate of the fibrin segment is primarily attributed to the rising adoption of these products.

The gynecological surgeries segment held the largest market share in 2019 and is expected to maintain its dominance during the forecast period. Market dominance is primarily attributed to the rising number of gynecologic laparoscopy procedures. Furthermore, the increasing adoption of gel form and film form in various gynecological procedures including endometriosis surgery, ovarian cystectomy, and ectopic pregnancy is boosting the market growth. Slow adoption of minimally invasive techniques in developing countries is expected to have a positive impact on the adoption of adhesion barriers. Minimally invasive surgeries require expensive equipment such as cameras and robot-assisted devices. The adoption of these devices is expected to be moderate in developing countries because of price-sensitive customers.

Based on formulation, the market is segmented into film/mesh, gel, and liquid. The film/mesh segment held the largest market share in 2019 and is expected to maintain its dominance during the forecast period. The large share of the segment is primarily attributed to its low cost and increasing use of film form adhesion in various surgeries. In addition, many clinical pieces of evidence are supporting the efficiency and safety of these forms of adhesion, thus, adding growth to the market. 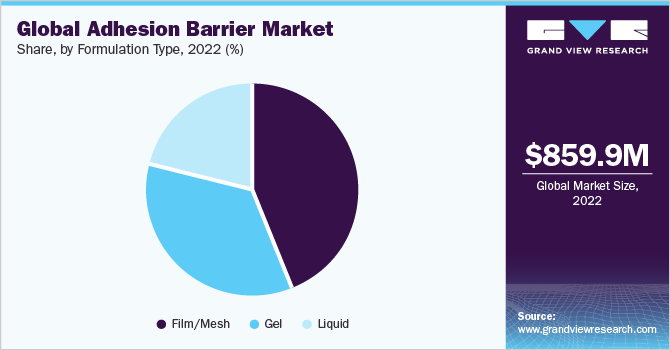 The gel segment is expected to grow at the fastest rate during the forecast period. The high growth rate of the segment is primarily attributed to its advantages such as affordability, resorbability, easy application, and safety. Moreover, increasing usage of gels in various surgeries such as tendon, carpal tunnel, and joint or peripheral surgery is expected to expand its applications in upcoming years.

Regionally, the market is segmented into North America, Latin America, Europe, Asia Pacific, and the Middle East and Africa. North America dominates the market owing to the presence of major players such as Johnson and Johnson, Baxter International, Integra LifeSciences, Anika Therapeutics, and FzioMed. An increase in the prevalence of orthopedic conditions coupled with high adoption of advanced treatment procedures is anticipated to fuel market growth in the U.S.

The Asia Pacific market is expected to grow at a lucrative rate over the forecast period. The high growth rate in the region is primarily attributed to the rising geriatric population and increasing incidences of cardiac and neurosurgery, which require surgical interventions. Moreover, rising private sector investment in healthcare and rapidly expanding medical tourism is expected to drive the market in the region. Major countries such as India, China, and Japan are expected to contribute maximum growth to the region during the forecast period.

This report forecasts revenue growth at global, regional, and country levels as well as provides an analysis of the latest industry trends in each of the sub-segments from 2016 to 2027. For the purpose of this study, Grand View Research has segmented the global adhesion barrier market report on the basis of product, formulation, application, and region:

How big is the adhesion barrier market?

What is the adhesion barrier market growth?

Which segment accounted for the largest adhesion barrier market share?

b. North America dominated the adhesion barrier market with a market share of 47.4% in 2019. This is attributable to the increase in the prevalence of orthopedic conditions coupled with the high adoption of advanced treatment procedures.

Who are the key players in adhesion barrier market?

What are the factors driving the adhesion barrier market?

b. Key factors that are driving the market growth include increasing surgical procedures, improvement in healthcare infrastructure, increasing prevalence of chronic diseases and sports-related injury.