The global agricultural biotechnology market size was estimated at USD 89.89 billion in 2018 and is projected to grow at a CAGR of 7.07% during the forecast period. An increase in demand for new breeding techniques is expected to propel the market growth. This is supplemented by increasing penetration of biotechnology tools to create or modify traits of organisms-including plants, animals, and microbes-with respect to color, yield, or size. 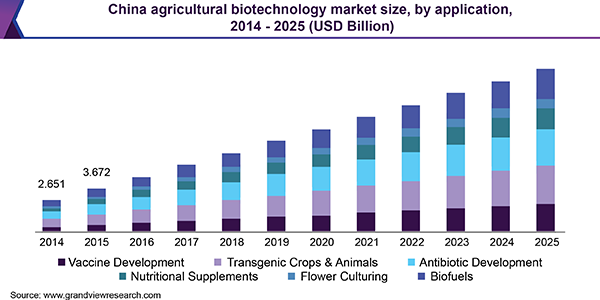 A rise in the adoption of Genetically Modified (GM) crops globally is expected to drive the market throughout the forecast period. This is because genetic modification allows the production of feed and food crops with enhanced characteristics such as high nutritional value, high yield, enhanced food-processing qualities, and resistance against diseases and insects. In many countries, GM crops have been adopted rapidly, and the market for insect-resistant, herbicide-tolerant GM seeds is among the growing sectors of the agricultural industry.

Agricultural biotechnology involves the use of a broad range of modern techniques to develop innovative products with enhanced quality traits. Conventional breeding techniques have been adopted largely to carry out alterations in plant and animal genomes. In addition, advancements in the field of genetic engineering have enabled controlling of genetic changes induced into the organism.

Advanced biotechnology tools have enabled professionals to incorporate new genes from one species to another unrelated species targeting towards the optimization of agricultural production or manufacturing valuable pharmaceutical compounds. The most common subjects of genetic engineering include farm animals, crops, and soil bacteria. 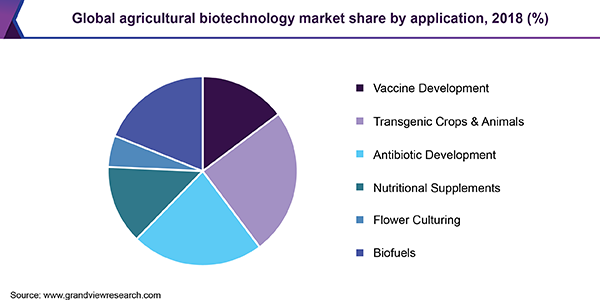 The global agricultural biotechnology market is classified into three segments based on the organism: plants, animals, and microbes. The plants’ segment has generated the largest revenue in 2018 and is expected to maintain its dominance throughout the forecast period. Whereas the animals’ segment is expected to grow at the fastest CAGR in the coming years. Each of the segments of organism outlook is further classified into three segments based on techniques; conventional techniques established genetic modification and new breeding techniques.

North America dominated with the largest revenue share in 2018, owing to its wide range of agro-climatic zones and crops, along with a large global Genetically Modified (GM) planted area. In this region, the U.S. and Canada together represent around 50% of the global GM area and around 10% global planted area. Major crops cultivated in around 70% of the cultivated area of North America include corn, soybean, and wheat, followed by alfalfa, cotton, canola, & barley. Moreover, North America is a net exporter of agricultural products with around 30% production of corn, soybean, and wheat globally.

Whereas, Asia Pacific is expected to grow at the fastest pace during the forecast period. This region is characterized by the presence of several with different political & economic systems, cultural backgrounds, and languages. Within these, the agricultural industry varies from the adoption of high technical standards in Japan to basic systems in India.

Asia Pacific serves as a lucrative market as the region occupies nearly 40% of the global cropped area (nearly 600 million hectares). The region is also characterized by the importance of rice crop (except Australasia), and the predominance of smallholders. Rice is available at highly subsidized rates across Asia and food security is a major concern for local governments in most of its developing economies. The region holds nearly 90% of the total crop area for rice, with 20% and 28% in China and India respectively.

Over the years, the market has witnessed a substantial number of product launches. For instance, in July 2019, KWS SAAT SE & Co. KGaA launched six new hybrid corn varieties as part of its brands, KWS and Riber, in Brazil. These varieties provide high genetic protection against insects, high yield, and tolerance against herbicides. This launch allowed the company to provide an innovative portfolio of seeds to Brazilian farmers, thereby improving their presence in Brazil.

This report forecasts revenue growth at global, regional, and country levels and provides an analysis of the latest industry trends in each of the sub-segments from 2014 to 2025. For the purpose of this study, Grand View Research has segmented the global agricultural biotechnology market report on the basis of application, organism type, and region: