The global nutritional supplements market size was valued at USD 273.9 billion in 2018 and is anticipated to expand at a CAGR of 6.4% over the forecast period. Rising health consciousness and growing consumer interest in active living are some of the major factors driving the market. According to the National Institutes of Health (NIH), in 2019, Americans spend around USD 2.1 billion annually on weight-loss dietary supplements. Rise in the geriatric population and increasing prevalence of lifestyle diseases, including obesity and diabetes, further boost the demand for nutritional supplements among consumers who are inclined towards a healthy lifestyle. According to the International Diabetes Federation (IDF), as of 2017, more than 12.5 million cases of diabetes were reported in Brazil.

Increasing disposable income, especially in Asian countries and growing consumer willingness to spend on nutritional supplements are positively impacting the growth. For instance, it is estimated that from 2001 to 2016, the real disposable personal income has grown at an average rate of 11.5% in China, 7.5% in India, 6.6% in Vietnam, and 5.7% in Malaysia. Moreover, the size of the working-class population in Asia Pacific has expanded owing to its strong economic growth. Growing consumer awareness for preventive healthcare and a rise in self-directed consumers are significantly contributing to the growing demand for these supplements. 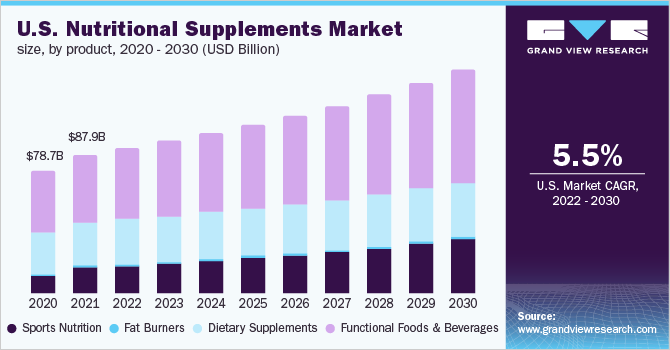 Growing industry partnerships and collaborations is one of the key factors contributing to market growth. For instance, in February 2019, Culturelle, a probiotic brand, announced its partnership with Persona Nutrition, a personalized nutrition program. The partnership helped the company to expand its capabilities in personalized nutrition as well as traditional remedies, which is further expected to impel the demand for nutritional supplements. In addition, the market is witnessing a large number of mergers and acquisitions for various benefits, including product portfolio, geographic expansions, and gaining superior expertise in the health and nutrition segment. For instance, in November 2018, Glanbia, plc. acquired SlimFast brand from KSF Holdings LLP and HNS Intermediate Corporation in order to enter into the weight management category.

Emerging local players, particularly in Asian countries like China, Japan, and India, and the growing adoption of plant-based ingredients are propelling the demand for nutritional supplements. For instance, InnovoPro is one such Israeli foodtech startup that launched the world’s first chickpea protein concentrate, CP-Pro 70, in 2019. In addition, growing consumer interest in sports-related activities and an increasing number of health and fitness centers are some of the significant factors anticipated to boost the demand for nutritional supplements in the coming years.

As of 2018, the functional foods segment held the largest share of 57.7% in the market. Factors such as an increase in consumer awareness about the benefits of a healthy diet and a rise in demand for nutritional and fortified food additives are contributing to the segment growth. In addition, the presence of a large number of commercialized products is a key factor propelling the growth of the functional foods segment.

Growing demand for probiotics for maintaining digestive wellness is also one of the significant factors propelling the growth of this segment. Recent product innovations and rising mergers and acquisitions are resulting in market expansion, thereby contributing to its large market share. The functional food market is fragmented and leading to the proliferation of new niches, which, in turn, is supporting its growth.

The sports nutrition segment is expected to register a CAGR of 9.1% over the forecast period. Rising consumer interest in sports activities is one of the key factors for its increased growth. Moreover, increasing number of health and fitness centers involved in the endorsement of sports nutrition brands is expected to boost the demand for sports nutrition products over the forecast period. According to the International Health, Racquet & Sportsclub Association (IHRSA), the number of health clubs in the U.S. increased by 5.2% from 36,540 in 2016 to 38,447 in 2017.

The children segment accounted for the largest revenue share of 27.3% in 2018. Factors contributing to its increased market share include an increasing number of new product launches for this category and a rise in the number of children suffering from malnutrition. According to the WHO estimates, in 2017, about 155 million children under 5 years were chronically undernourished. In addition, increasing demand from parents for providing additional nutritional support to children is propelling the growth of this segment. Growing awareness about the benefits of nutritional supplements and an increasing number of health-conscious parents further boost the growth of this segment.

The children segment is likely to emerge as the fastest-growing segment over the forecast period. Advantages associated with nutritional supplements in maintaining general health, boosting immunity, and reducing nutritional deficiency is a key reason responsible for increasing the demand among children. In addition, ongoing research activities to introduce unique flavors and packaging for children is one of the factors expected to boost its demand among children in the coming years.

The adult segment holds a significant share owing to the high adoption of nutritional supplements and the presence of a large population in this age group. The risk of developing chronic diseases is high among this age group, which increases their dependency on preventive alternatives.

The powder is one of the rapidly growing segments in the market. Ease in consumption of supplements in the powdered form among all the age groups is a key factor propelling the demand for powdered formulations. In addition, the availability of a large number of powdered supplements is one of the significant factors that contribute to its increased market share. Increased adoption among active athletes and lower manufacturing costs are expected to bolster the growth of the powder segment during the forecast period. Powders are generally flavored and colored and can be dissolved in any beverage of the patient’s choice, which, in turn, is driving its demand.

The capsules segment held the largest revenue share of 40.1% in 2018. Recent advancements in capsule technology overcome the challenges of bioavailability, targeted/timed release profile, and stability, which, in turn, is propelling the demand for capsules. For instance, Capsugel’s lipid multiparticulate (LMP) technology encapsulates smaller ingredients in the lipid sphere, which can be used for ready-to-mix blends, masking the taste of bitter ingredients like caffeine, and modifying the release time in case of pre- or post-workout supplements.

In 2018, brick and mortar held the largest revenue share in the market. The presence of a large consumer base of brick and mortar channel, especially the aged population group who values buying experience over the time spent, is one of the key attributes responsible for its major market share, as of 2018. The brick and mortar segment includes specialty stores, supermarkets, hypermarkets, and pharmacies. In addition, this sales channel has an edge over the online platform as it has the benefit of fulfilling immediate requirement, thereby boosting the growth of this channel. Consumers tend to rely more on this channel as compared to online platforms as there is a threat of purchasing substitute or counterfeit products. 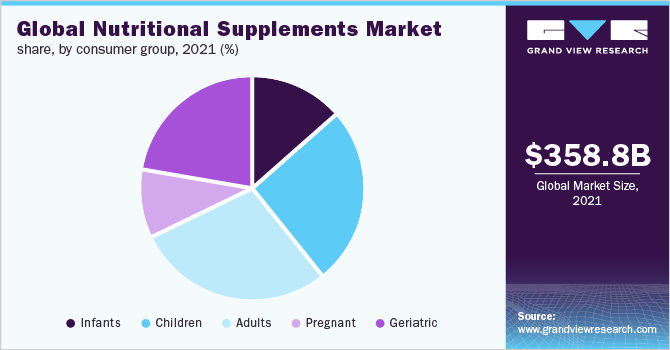 Established retail stores are formulating some strategies to maintain their share in the retail business. For instance, in 2017, Vitamin Shoppe launched Brand Defining Stores in around nine locations to increase customer engagement and enhance their overall experience. These stores are easier to navigate and have sports nutrition and protein sampling station, which lets consumers try products before purchase. The huge presence of specialty stores is one of the major factors driving the growth of the bricks and mortar channel. For instance, GNC has more than 4,800 retail stores while Vitamin Shoppe has around 785 stores across the U.S.

E-commerce is expected to expand at the fastest CAGR of 7.4% over the forecast period. An increasing number of e-commerce platforms, rising self-directed consumers, and a surge in the number of discounts on online platforms are boosting the demand for e-commerce. For instance, in July 2018, Optimum Nutrition, a global sports nutrition brand, offered discounts on many best-selling products for a 72-hour sale on Amazon Prime Day.

In 2018, Asia Pacific dominated the market and accounted for a 39.5% share of the total revenue. Key factors contributing to the high demand include the presence of a large number of local players, availability of cheap active pharmaceutical ingredients (APIs), and emerging contract manufacturing hubs, like China, India, and the Philippines. Rising health consciousness and growing interest in sports activities also contribute to regional market growth.

The growing popularity of traditional products is creating growth opportunities for local players to grow. In addition, digital infrastructure is improving in countries such as India and China, which offers huge opportunities for online platforms. Many multinational companies are partnering with local players to strengthen their presence in this region. For instance, in 2018, Jamieson Wellness, a Canadian vitamin and supplement manufacturer, entered into a five-year agreement with MedPlus, an Indian pharmacy chain, to expand its business in Asia.

Latin America is expected to expand at the fastest CAGR of 8.5% over the forecast period. Changing consumer lifestyle, rise in disposable income, and favorable government initiatives are some of the major factors responsible for its increased growth. In addition, the growing prevalence of obesity and diabetes in this region is one of the significant factors anticipated to boost demand over the forecast period. According to the Panorama of Food and Nutrition Security in Latin America and the Caribbean 2017, nearly 360 million (58%) people in this region were obese.

Key players operating in the market include Amway; Abbott Nutrition; Nestle; Herbalife International of America, Inc.; and Glanbia plc. The market is fragmented due to the presence of a large number of small and large market players. R&D investments, mergers and acquisitions, collaborations with other industry players, geographic expansions, and product and flavor differentiation are some of the key strategies adopted by these companies to gain a competitive edge in the market.

This report forecasts revenue growth at the global, regional, and country levels and provides an analysis of latest industry trends in each of the sub-segments from 2014 to 2025. For the purpose of this study, Grand View Research, Inc. has segmented the global nutritional supplements market report on the basis of product, consumer group, formulation, sales channel, and region: