The global agriculture drone market was valued at USD 193.4 million in 2015. The increasing investments rendered to the manufacturers, by the venture firms, are expected to drive the market over the forecast period. 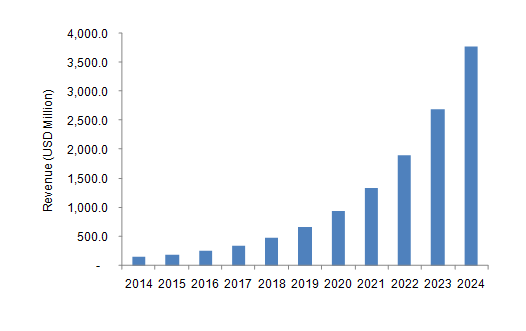 Farmers are increasing implementing this technology, in farming, to gain better productivity and efficiently use water, land, and fertilizers. Furthermore, the technological, including sensors, better materials, and imaging capabilities, are also expected to fuel the agricultural sector.

Agriculture drones are emerging as a lucrative sector as the applications of commercial drones over the forecast period. They aid farmers by taking snapshots of a vast array of fields, providing crucial data pertaining to crops and soil, in order to assist in crop management. The UAVs used in crop monitoring can radically enhance yields while reducing the cost of airplane fly-over filming.

The increasing applications have influenced the industry to invest significantly in funding the UAV-based startups. The venture-based startups in the industry are focusing on providing software & hardware or the services, which account for more than 80% of the market. The lack of trained pilots and stringent regulations may hinder the growth of drones over the forecast period. The technical institutes and universities developing agricultural flying robots are establishing programs to provide guidance for operating the UAVs, which is anticipated to improve the industry.

Based on the products, the market is segmented into fixed-wing, rotary blade, and hybrid. The fixed-wing UAVs are expected to lead the industry over the forecast period, owing to their ability to carry heavy payloads and cover long distances.

The hybrid UAVs are anticipated to grow significantly with a CAGR of over 40% from 2016 to 2024, owing to the capability of covering long distances, with hover, over the fields. The proliferation of economical navigation and visualization, which include inspection and mapping, has helped the farmers in monitoring the fields.

The ability of drones to accurately spray fertilizers, without causing any issues, such as over spraying and disturbing soil fertility, is expected to propel the growth of crop scouting segment over the forecast period. The development of the Normalized Difference Vegetation Index (NVDI) with respect to crop scouting is also expected to contribute to the industry over the forecast period. NVDI helps in inspecting the progress of the crops with near-infrared sensors and captures the data that cannot be captured by the human eye.

The North American region dominates the global agriculture drone market. Increasing trend of implementing the UAVs from mowing to plowing for enhanced productivity is expected to influence the industry growth. Furthermore, growing awareness for precision agriculture for field mapping, crop scouting has also led the farmers to implement UAVs in farming.

The industry players are focused on making strategic acquisitions, to grow in the industry. This is helping the players in developing efficient tools to assist farmers and for the better management of the operations. The key industry competitors include AeroVironment, Inc., DJI Technology, 3D Robotics, Trimble Navigation Ltd., and DroneDeploy. Trimble Navigation Ltd. holds a major share in the industry for large-scale manufacturing of drones.