The global agro textiles market size was valued at USD 8.46 billion in 2016. Agricultural fabrics aid in improving crop quality and helps in increasing overall productivity. Need to increase agricultural productivity to fulfill daily demand of the growing population has led to the growth of the agrotech market.

The demand for products such as mulch mats, insect net, shade nets, fish nets, etc. depends on the awareness and acceptance of these products by farming community and also on the technical and performance properties of these products.

High demand for food crops is observed due to growing population across the world. However, depleting arable land in mature economies is one of the major challenges faced by the global agricultural sectors. Agrotech products are a partial solution to this problem as they increase yield and cater to major issues such as soil pollution, water conservation, and climatic change.

Various innovations in the industry, such as induction of advanced materials have opened up potentials for innovation in shading and crop protection, including capillary nonwovens, floating covers, and textiles incorporating pesticides, fertilizers, superabsorbent polymers and seeds which are expected to drive market growth over the next eight years.

Rising standards of global farming in production of safe food is driving the agricultural textiles market. EU Common Agricultural Policy (EU CAP) is expected to accelerate self-sustaining improvements in food production to meet the increasing demand, which is expected to boost market growth.

The key restraint to the growth of agricultural fabrics includes low awareness about the benefits, high initial investment for setting up the infrastructure, volatility of raw materials and cascading impact of taxes also affects the sales of agrotech products.

Shading nets segment is expected to grow at a CAGR of 4.8% over the forecast period to reach a net revenue exceeding USD 2.70 billion by 2025. Shading nets aim at providing protection to plants from extreme weather conditions, winds, and reducing water evaporation. They are also used to delay or prolong the harvesting period in sunny areas. Shading nets are also used in screen house or virus free productions. Increasing air humidity and the reduction in air flow could be a limiting factor in their use.

Mulching helps to maintain soil water retention, soil temperature, and prevents the growth of weeds. In addition, it helps to grow the crop faster with healthier and higher yield. Mulch mats are used in dry regions where sustaining of crops is important and are used mainly in vegetable and few fruit crops that were of short duration crops. Factors such as protection of crops from pests, limited supply, and judicious use of water and high agricultural productivity are anticipated to drive the market over the forecast period.

Anti-hail and bird protection nets demand was 96 kilotons in 2016 and is anticipated to grow at a CAGR of 3.3% over the next eight years. Anti-insect nets are considered a human health and environmentally friendly substitute to pesticides and are generally used in the application of organic farming. Anti-bird nets are used directly on the trees or mounted on the vents of greenhouses, which are used to protect the cultivations from the attack of birds, insects, and little animals such as hares, rabbits, and mice.

Fishing nets are agro textiles used in the fishing industry. India is the leading fish producing country and the demand for fish products are raising both in export and domestic markets. Further, there is an increasing modernization activity in the fishing sector and also improving fisheries culture has raised the market growth of agrotech products.

Agro textile demand in agriculture application is expected to reach 558 kilotons by 2025, growing at an estimated CAGR of 4.4% from 2017 to 2025. Advancements in biotechnology have led to rapid change and evolution in traditional farming methods to a more scientific approach. Farmers worldwide are being trained to decide the optimum solution that can help them in achieving sustainable growth. Implementation of highly effective technologies in the agricultural industry is anticipated to surge crop yield, and hence, impact the overall productivity. This trend is expected to create immense opportunities for agricultural textile and is estimated to have lucrative growth prospects in the near future. 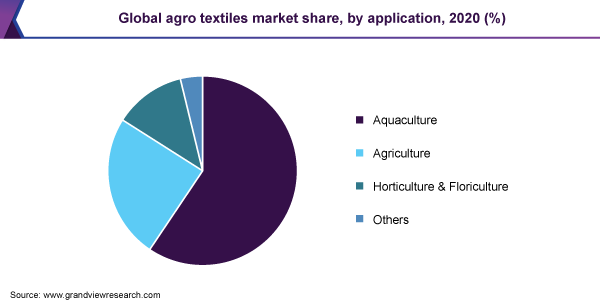 Aquaculture or aquafarming activities have been conducted across the world for the past several centuries. However, the activity has been recently commercialized and the market has expanded significantly over the past few decades. Rising importance of fish for applications other than food, such as production of nutraceuticals and dietary supplements, has been one of the primary factors driving aquaculture growth. In addition, aquaculture witnessed the highest growth as a source of food and income over the previous 20 years. Technological advancement and government support have played an important role in augmenting market growth.

The agricultural textiles market in Asia Pacific is estimated to witness the fastest growth rates in terms of both volume and revenue. The regional industry is expected to grow at a CAGR of 5.1% from 2017 to 2025. Escalating demand for food crops and increasing acreages of oilseeds particularly in South-East Asia and India is expected to augment agricultural textile demand in the region over the forecast period.

Increasing industrial and commercial land acquisitions in the region especially in Indonesia, Malaysia, Thailand, and India has led to depletion in arable land for vegetation purposes. This trend has furthered greenhouse and mulch nets demand over the past few years.

North America aquaculture production is anticipated to foresee a significant growth on account of increasing farming meat for shell fishes and growing domestic consumption of seafoods. In June 2011, the National Oceanic and Atmospheric Administration (NOAA) and the U.S. Department of Commerce released national aquaculture policies for supporting sustainable marine aquaculture at the domestic level. Therefore, increasing deployment of aquaculture in the U.S. on account of favorable government support is anticipated to promote agro tech demand for aquaculture application in the region.

Giant and experienced players have achieved full integration among the value chain to strengthen their market position. Several manufacturers are involved in the direct supply of agricultural textiles and its captive consumption for various applications. There is a high degree of backward integration from manufacturers to raw material suppliers.

This report forecasts revenue growth at global, regional & country levels and provides an analysis of the industry trends in each of the sub-segments from 2014 to 2025. For the purpose of this study, Grand View Research has segmented the global agro textiles market on the basis of product, application, and region:

How big is the agro textiles market?

What is the agro textiles market growth?

Which segment accounted for the largest agro textiles market share?

b. Asia Pacific dominated the agro textile market with a share of 53.4% in 2019. The escalating demand for food crops and increasing acreages of oilseeds particularly in South-East Asia and India is expected to augment agricultural textile demand in the region over the forecast period.

Who are the key players in agro textiles market?

What are the factors driving the agro textiles market?

b. Key factors driving the agro textile market growth include the need to increase agricultural productivity to fulfill daily demand of the growing population has led to the growth of agrotech market.