The global algae biofuel market size is expected to be USD 6.43 billion in 2019 and is anticipated to expand at a compound annual growth rate (CAGR) of 8.8% from 2020 to 2025. This growth can be attributed to an increasing demand for bio-based resources to replace traditional fossil fuel products.

The high potential associated with algae to produce bioethanol, biodiesel, drop-in biofuels, and hydrocarbons coupled with initiatives taken by the manufacturers to commercialize the product is expected to open new avenues for the industry.

The algae industry has been struggling to sustain itself in the biofuel market over the past decade, furthermore, decommissioning of major algae biofuel commercial projects has restrained the industry growth. However, the product has the potential to witness enormous scope once the manufacturers are capable of overcoming the key barriers associated with raw material manufacturing, capital cost, and production volumes. 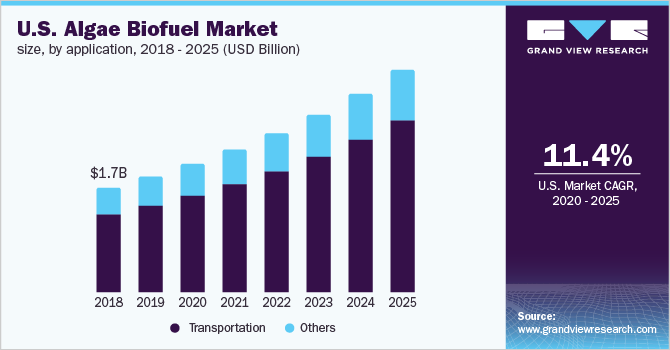 The introduction of biofuel mandates across the world is expected to compel manufacturers to invest more in R&D to develop sustainable algae fuel production technology over the forecast period. The U.S. produced over 1.14 billion gallons of biofuel in the year 2016 from various feedstock including animal fats and recycled seeds.

The high potential of algae to replace traditional biofuel raw material sources coupled with the mandates introduced by the U.S. government are expected to open new avenues for product growth, which is expected to be adopted by other regions over the projected period.

The market has numerous start-up companies located across the world. The majority of these players are situated in North America, owing to the high government support and low technology barriers in the region.

The companies in the sector are expected to be integrated across the value chain to limit their dependency on raw material suppliers. In addition, the industry is expected to foresee collaborations and partnerships among the manufacturers in order to produce high volumes of the product along with the substitute competitive pricing.

Due to their high yield, algal biofuels have the potential to replace other bioethanol resources such as corn stover, cassava, corn, sugar beet, sweet sorghum, and switch grass. Compared to other products such as corn, sunflower, sugar cane, and soybeans, algae require only carbon dioxide, water, and sunlight, which stimulates its growth. In addition, algae are capable of producing 5,000 to 20,000 gallons of oil per unit area per year. These factors are expected to drive market growth over the coming years.

In addition, increasing demand for renewable fuels among consumers is anticipated to be a major factor driving the algae biofuel market. Growing awareness regarding renewable energy sources, owing to various research studies being conducted, enables consumers to understand the need to shift from fossil fuels toward alternate energy sources. For instance, as per IEA, the global demand for biofuels is expected to increase by 28% by 2026. Furthermore, government initiatives, such as incentives for renewable energy production or usage and funding for research & development in breakthrough technologies or best practices, are anticipated to prompt power producers to adopt clean energy sources, thereby boosting the market growth.

Increasing government initiatives for capacity addition and tax incentives are expected to majorly boost the growth of the biodiesel market over the forecast period. As biodiesel is, a highly energy-efficient fuel it helps in alleviating energy security risks and the pollution levels associated with the use of fossil fuels. Countries such as Brazil, Germany, and the U.S. have initiated tax incentives to boost the production of biofuels and reduce the price of biodiesel at pumps. European countries such as France, Italy, Germany, Spain, Denmark, and the Czech Republic are also permitting full tax exemption for a specific volume of biodiesel production.

Large-scale production of algae biofuels involves significant challenges due to the high cost of production. This factor is expected to restrain the market growth during the forecast period.  Another major challenge faced by the algae biofuel market is the extraction of algal oil. At present, three key methods are used for the extraction of algal oil including hexane extraction, CO2 fluid extraction, and oil expellers. Although these technologies are effective for manufacturing algal oil, they are very expensive, as they require costly equipment and high-energy consumption, which heighten the cost of the final product. The infeasibility of these processes to produce large volumes at low cost is expected to hamper the market growth over the forecast period.

Increasing demand for biofuels in road vehicles such as heavy-duty trucks, commercial vehicles, two-wheelers, and passenger vehicles is expected to propel manufacturers to incur in research and development activities to develop low-cost renewable fuel. The above factors are expected to provide new growth opportunities for transportation during the forecast period.

The algae biofuel market is segmented on the basis of two major applications including transportation and others such as aerospace and industrial. Transportation is expected to be the dominating application segment in the industry owing to the potential of algae to replace traditional diesel and petrol products.

Petroleum fluids, including jet fuel, diesel, petrol, and fuel oil accounted for one-third of the world's energy consumption in 2015 and this demand is expected to grow at a CAGR of over 1.5% over the projected period. The rapid growth of the automotive sector owing to rising consumer income and technology innovations is expected to propel the demand for new sustainable raw material sources such as algae.

Growing demand for biofuel in road transport applications including small trucks, minivans, light-duty vehicles, motorbikes, and passenger travelers is expected to compel manufacturers to invest more in R&D to develop low-cost renewable fuel resources. The aforementioned factors are expected to open new market opportunities for the product growth in transportation applications over the forecast period. 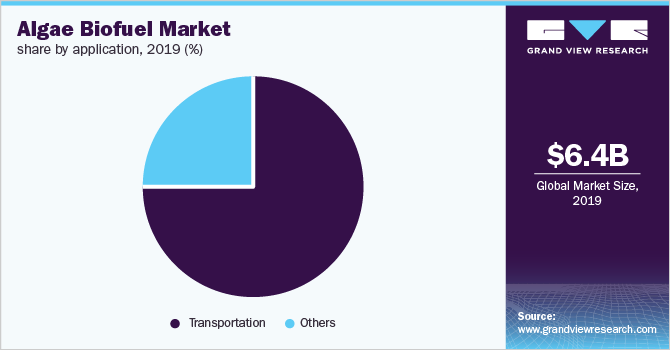 Growing demand for alternative liquid fuel products in the commercial aviation sector and military applications is expected to be a key factor driving the market growth over the projected period. Initiatives taken by the manufacturers to achieve the required fuel standards and a positive government outlook for the industry are likely to drive growth.

In addition, changing crude oil dynamics have created an opportunity for investment in alternative fuel technologies in North America. Continuous investments in R&D activities by manufacturers to utilize the maximum photosynthetic efficiency of algae strains are resulting in increased extraction of algae oil, which is expected to have a positive impact on the market growth over the forecast period. The U.S. government has mandated a shift in the production of biofuel from food-based crops to microalgae-based crops, which is expected to boost the demand for biofuel over the forecast period.

In Europe, favorable government policies for promoting energy generation from non-conventional sources are expected to boost market growth. The government of the U.K. intends to use biofuel for meeting the aviation fuel needs in order to reduce GHG emissions. Algae oil can be used to blend aviation fuel as it has a positive impact on aircraft performance by lowering operating expenditures. These factors are expected to drive the regional market over the forecast period. 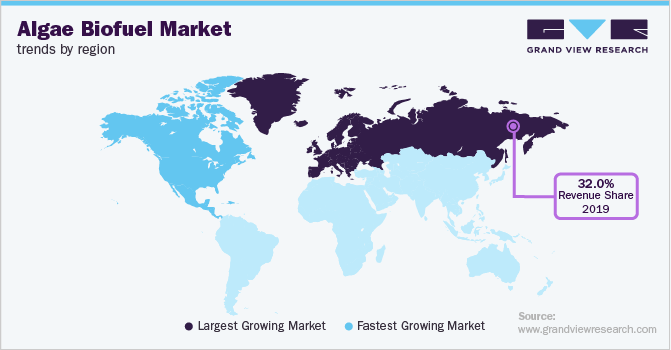 Germany has a positive outlook in terms of subsidies and incentives for research institutes and manufacturers involved in the production of sustainable bio-based fuel resources. Also, numerous R&D activities, robust engineering systems, and research-intensive small and medium-sized enterprise supporting the cultivation and utilization of microalgae is expected to have a positive impact on the market growth over the forecast period.

In January 2015, in India, Reliance Industries and Algenol deployed the country's first Algenol algae production platform. In addition, in July 2013, Reliance Industries Ltd. launched a new facility to convert algae into oil, with the aim of producing 100-barrel oil per day in the upcoming years.

This report forecasts revenue growth at global, regional & country levels and provides an analysis of the industry trends in each of the sub-segments from 2018 to 2025. For the purpose of this study, Grand View Research has segmented the algae biofuel market on the basis of application, and region. 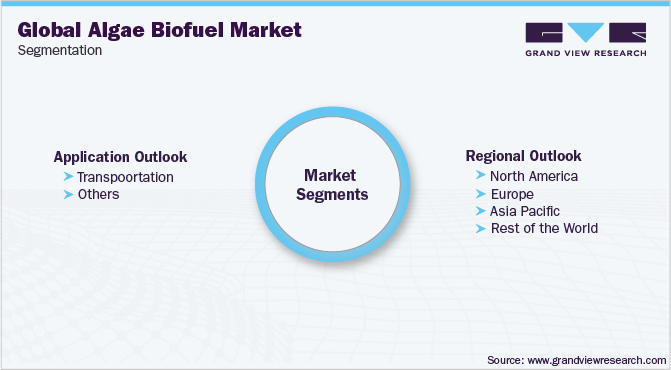