The global ambulance services market size was valued at USD 32.2 billion in 2020 and is expected to expand at a compound annual growth rate (CAGR) of 9.6% from 2021 to 2028. The demand for ambulance services is on a rise owing to the favorable reimbursement policies, rising medical tourism, an increasing number of road accidents, and a growing geriatric population. Road accidents are rapidly increasing and such cases require immediate medical attention and ambulance services. According to the Association for Safe International Road Travel (ASIRT), approximately 1.3 million people die in road crashes every year and additionally, 20-50 million get injured or disabled. 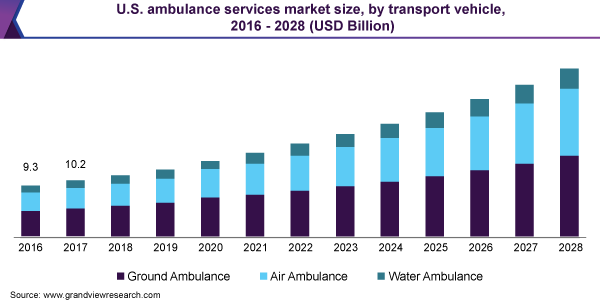 Road traffic accidents account for the 9th leading cause of death worldwide. ASIRT also reported that in the U.S., over 37,000 people die in road accidents every year and an additional 2.35 million get injured or disabled. As per the Ministry of Road Transport and Highways Transport Research Wing, Government of India, road accidents have increased by 2.5%, and deaths from road accidents have increased by 4.6% from 2014 to 2015. It also reported that approximately 400 deaths take place every day on Indian roads. In 2015, states that recorded the highest number of road accidents were Tamil Nadu (69,059), Maharashtra (63,805), and Madhya Pradesh (54,947).

Cardiovascular Diseases (CVDs) such as cardiac arrest, congestive heart failure, stroke, and coronary artery disease, require immediate medical attention and emergency medical services. According to the WHO, globally, CVDs are the leading cause of death and in 2015, CVD comprised 31.0% of the total global deaths. Of these, 6.7 million were caused by stroke and 7.4 million were a result of coronary heart diseases. As per CDC, every year, approximately 735,000 cases of heart attack are reported in the U.S. As per British Heart Foundation, there are approximately 200,000 hospital visits every year due to heart attacks, which is, one visit every three minutes. It also reported that every year approximately 40,000 deaths are expected to take place due to stroke in the U.K. CVD is among the leading causes of death in the world and usually requires immediate medical attention, which increases the need for ambulance services. Therefore, the rising incidence of cardiovascular diseases is expected to bolster the growth of the market.

The presence of a large population pool over 60 years, which typically has a lower immunity level and is prone to neurological diseases, cardiac problems, cancer, and spinal injuries, is also expected to be a high impact rendering driver for the growth of the market over the forecast period. As per WHO, globally, the number of people aged 65 or older is anticipated to grow from an estimated 524 million in 2010 to nearly 1.5 billion in 2050. The geriatric population is highly susceptible to diseases such as arthritis, heart attacks, stroke, osteoporosis, and obesity. Patients suffering from such diseases may require emergency as well as non-emergency services. Hence, an increasing geriatric population is likely to result in the growth of the market.

Medical tourism is also rising due to developments in healthcare infrastructure and advanced reimbursement policies. For instance, as per the report “Export Health Services” by the Directorate-General of Commercial Intelligence and Statistics of India, in 2015-2016, India had 58,300 medical tourists on medical visas. Additionally, according to a report by Ctrip, a leading travel agency in China, medical tourism in China had witnessed a growth of 500.0% with a total of 500,000 outbound medical travels in 2016.

Medical tourism is usually considered by people in developed nations if the cost of treatment is comparatively higher in their home countries. According to the “Patients Beyond Border” guidebook, taking the U.S. healthcare cost as a benchmark, average saving on healthcare in the most-traveled destinations are 20-30% in Brazil, 45-65% in Costa Rica, 65-90% in India, 65-80% in Malaysia, 40-65% in Mexico, 25-40% in Singapore, 30-45% in South Korea, 40-55% in Taiwan, 50-75% in Thailand, and 50-65% in Turkey. It also reported that top medical tourism destinations are India, Costa Rica, Turkey, Israel, Singapore, Malaysia, Taiwan, Mexico, South Korea, Thailand, and the U.S. Therefore, due to the growth of medical tourism, ambulance services may be required in the travel destination to transport patients to their venue of treatment. This is expected to boost the market growth.

The ground ambulance segment dominated the market and held the largest revenue share of 49.5% in 2020. Ground ambulance includes van or pickup trucks, car/SUV, motorcycle, bicycle, all-terrain vehicles, golf cart, and bus. In the U.S., there are four types of ambulances—Type I, Type II, Type III, and Type IV. Type I includes vehicles with heavy truck chassis, which are used for rescue services, and Advanced Life Support (ALS). Type II includes vans or pickup trucks that are used to transfer patients for Basic Life Support (BLS). Type III is vehicles based on van-based chassis that function similarly to Type I ambulances. Type IV is for ad hoc patient transfer using small utility vehicles. Different regions have prescribed standards for the design of an ambulance pertaining to exterior marking, level of equipment, and crash resistance.

The emergency services segment dominated the market and held the largest revenue share of 61.5% in 2020. The segment is anticipated to witness a considerable growth rate over the forecast period. The growth of the emergency services segment can be attributed to the prevalence of cardiovascular diseases such as cardiac arrest, stroke, congestive heart failure, and rising cases of COVID-19 across the globe.

The Advanced Life Support (ALS) ambulance services segment dominated the market and held the largest revenue share of 67.5% in 2020. The segment is anticipated to witness the fastest growth rate over the forecast period. The segment is expected to witness rapid growth owing to rising awareness about life support services, high incidence of cardiovascular disorders, and an increase in technologically advanced equipment and trained personnel. ALS is the extension of BLS, which provides adequate ventilation and an open airway, and requires medical monitoring, drug therapy, and IV therapy. It also covers cardiac arrest conditions. 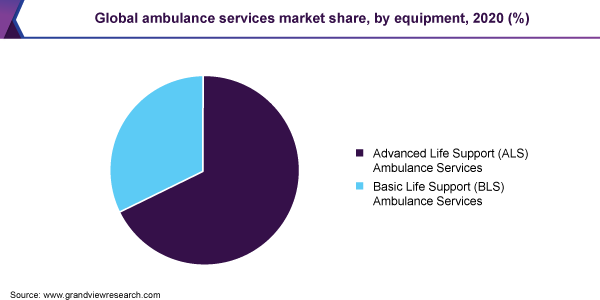 ALS is the next level of emergency care services and includes a set of life-saving skills and protocols. ALS ambulances are equipped with vascular access equipment, cardiac arrest treatment equipment, nebulizer, glucometer, large-bore needle, medications, and pre-loaded needles, over and above the BLS equipment. ALS ambulance is required for patients who need a higher level of care during transport such as a patient on a cardiac monitor, potential airway-compromised patient, and obstetrical patients.

North America dominated the ambulance services market and accounted for the largest revenue share of 47.9% in 2020. The segment is expected to witness a CAGR of 10.0% over the forecast period. The growth can be attributed to factors such as the presence of several key market players in this region, growing demand for high-quality healthcare services, well-established healthcare infrastructure, and favorable reimbursement policies and regulatory reforms in the healthcare sector. The emphasis of the U.S. healthcare system on quality of care and value-based services has led to market growth. In addition, the emergence of community paramedicine in North America has also contributed to the large market size of this region. Community paramedicine allows Emergency Medical Services (EMS) providers, who offer an array of services including preventive and primary care, to function outside their traditional emergency response and transport roles. The introduction of such novel concepts and growing consumer demand for better services in this region have propelled the growth of the market in North America.

Key players are involved in adopting strategies such as mergers and acquisitions, partnerships, and launching new products to strengthen their foothold in the market. For instance, in September 2017, BVG India Limited and the Andhra Pradesh government collaborated to provide emergency medical services in the state. The company provided 467 ambulances across Andhra Pradesh, which include 389 basic life support and 76 advanced life support ambulances. This joint venture is expected to boost the revenue of the company.

This report forecasts revenue growth at global, regional, and country levels and provides an analysis of the latest industry trends in each of the sub-segments from 2016 to 2028. For the purpose of this study, Grand View Research has segmented the global ambulance services market report on the basis of transport vehicle, emergency services, equipment, and region:

What is the ambulance services market growth?

How big is the ambulance services market?

b. The emergency services segment dominated the ambulance services market and held the largest revenue share of 61.5% in 2020. The segment is anticipated to witness a considerable growth rate over the forecast period.

Which equipment segment held the largest share in the ambulance services market?

b. The Advanced Life Support (ALS) ambulance services segment dominated the global market and held the largest revenue share of 67.5% in 2020. The segment is anticipated to witness the fastest growth rate over the forecast period.

b. North America dominated the ambulance services market and accounted for the largest revenue share of 47.9% in 2020. The region is expected to witness a CAGR of 10.0% over the forecast period.

Who are the key players in the ambulance services market?

What are the factors driving the ambulance services market?