The global antibody drug conjugates market size was valued at USD 1.57 billion in 2017 and is projected to register a CAGR of 25.9% over the forecast period. Major advancements in linker technology coupled with extensive R&D activities is likely to drive the market. Antibody Drug Conjugates (ADCs) are an innovative class of drug composed of an antibody linked, via a chemical linker, to a cytotoxic drug. ADC is designed to benefit from the high specificity of monoclonal antibodies to carry potent cytotoxic compound selectively to antigen-expressing tumor cells.

Conventional chemotherapy is intended to eradicate fast-growing tumor cells. However, it can also damage healthy proliferating cells, which produces undesirable side effects. In contrast, ADC is designed to upsurge the efficacy of treatment and decrease the systemic toxicity. 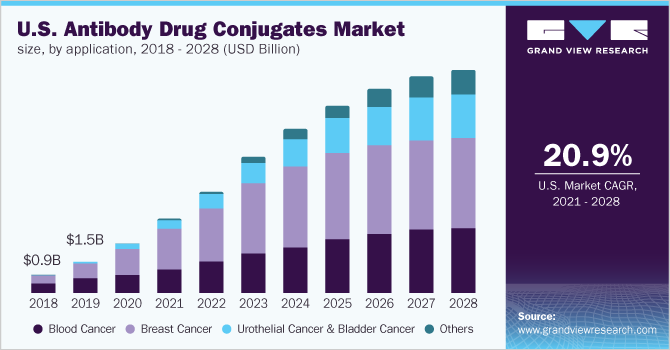 Currently there are more than 50 ADCs in clinical trials and it has been estimated that over the forecast period 3-4 ADCs will be commercially launched in the market. It has been projected that during the forecast period, Seattle Genetics will maintain the leadership in this space with over 20 ADCs in development and Adcetris being one of the top selling products.

Many companies are actively developing antibody-drug conjugates, majorly in U.S. and Europe. It has been estimated that 70% to 80% of ADC manufacturing is outsourced. Development of ADCs is quite challenging and only a few Contract Manufacturing Organizations (CMOs) have the competency to develop them. Hence, the market remains open for entry of new players who can overcome the manufacturing challenges.

ADCs combine the sensitive and unique targeting abilities of antibodies which allows sensitive discrimination between cancer tissues and healthy tissues with the cell-killing ability of cytotoxic drugs. All the four ADCs available in the market are approved for the treatment of cancer.

Based on application, the market is categorized into blood cancer, breast cancer, ovarian cancer, lung cancer, and brain tumor. Breast cancer was the largest revenue generating segment in 2017 owing to the factors, such as high prevalence of breast cancer on global scale and commercial availability of Kadcyla in most of the major regions.

It has been estimated that cleavable linkers will witness the fastest growth over the forecast period owing to the factors, such as wide usage of these linkers and maximum number of products in the pipeline. Furthermore, in 2017 two new Pfizer’s products-Besponsa and Mylotarg, were approved for usage in developed regions and both contain cleavable linkers. 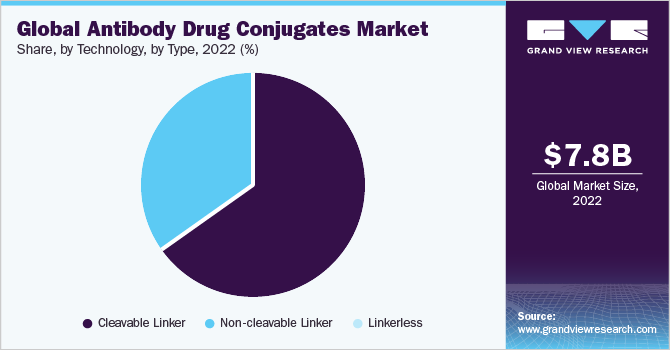 Production of suitable chemical linkers between the monoclonal antibody and the cytotoxic drug is one of the main challenges in manufacturing effective and safe ADCs. The synthesis of linker chemistry is relatively complex and numerous features must be balanced to guarantee efficacy, eventually, the type of linker being used forms the release profile of the cytotoxin.

In 2017, North America was the largest revenue generating region, followed by Europe. The major factor attributing for their continued dominance includes the presence of significant market players, such as Seattle Genetics, Roche, Pfizer, and AbbVie. North America is the most well-established market in terms of the usage of ADCs coupled with well-established healthcare infrastructure, and patient awareness.

North America is projected to witness the fastest growth over the forecast period as most of the ADCs currently in pipeline are being developed in U.S. Also, the U.S. Food and Drug Administration (FDA) is one of the first regulatory bodies to approve ADC in U.S. Hence, these factors are likely to boost market growth in the region over the forecast period.

This report forecasts revenue growth at global, regional, and country levels and provides an analysis of the latest industry trends in each of the sub-segments from 2014 to 2025. For the purpose of this study, Grand View Research has segmented the global antibody drug conjugates market report based on application, technology, and region: