The global anticoagulant reversal drugs market size was valued at USD 679.84 million in 2019 and is expected to expand at a compound annual growth rate (CAGR) of 14.3% from 2020 to 2027. Approval and launch of new therapies, increasing prevalence of bleeding disorders, and rise in the incidence of indications for anticoagulant therapy are some of the major factors driving the market. Approval and launch of new reversal agents for anticoagulants are significantly driving the market. For instance, in May 2018, the U.S. FDA approved Andexxa by Portola Pharmaceuticals as the first factor Xa inhibitor antidote. When an anticoagulation reversal drug is required due to uncontrolled or life-threatening bleeding, this reversal agent is indicated for patients treated with apixaban (Eliquis) and rivaroxaban (Xarelto). The expected launch of Andexxa under an Early Supply Program with Generation 1 product was in early June. However, the company announced the first sale of Ondexxya in Europe in August 2019 due to a larger number of patients taking Factor Xa inhibitor in the region as compared to the U.S. Andexxa received both FDA breakthrough therapy and U.S. orphan drug designations. 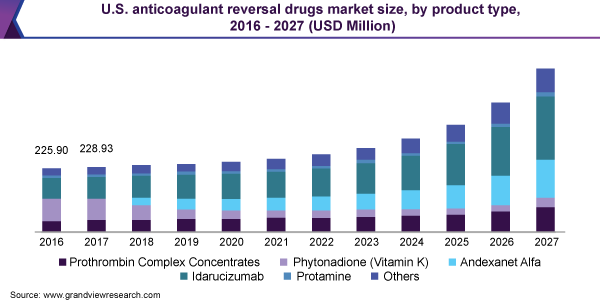 Some of the bleeding disorders include blood clots, hemophilia A and B, and Von Willebrand disease (VWD). According to the data by the National Hemophilia Foundation (NHF), around 30,000 to 33,000 people are living in the U.S. with hemophilia and 60% of them have severe hemophilia. The CDC estimates that each year, approximately 400 babies are born with hemophilia A. Von Willebrand disease is one of the most common bleeding disorders affecting 1 in every 100 people. Bleeding disorders affect blood clotting and might result in excessive bleeding both inside and outside of the patient’s body. This facilitates the need for anticoagulants, which further gives rise to the demand for anticoagulant reversal drugs during uncontrolled bleeding.

Certain indications that require anticoagulant therapies include atrial fibrillation, coronary artery disease, ischemic stroke, deep vein thrombosis, and pulmonary embolism among others. According to the CDC, around 2% of people below 65 years of age have atrial fibrillation, while 9% of people above 65 years of age have the disease. The CDC also estimated that nearly 12.1 million people are expected to develop atrial fibrillation by 2030. As per the CDC estimates, approximately 60,000-100,000 Americans die of deep vein thrombosis or pulmonary embolism.

Bleeding disorders can occur as a result of some medications, such as blood thinner, which includes heparin, aspirin, and warfarin. The risk of bleeding varies with the type of anticoagulant agent used. As per the data by the National Center for Biotechnology Information (NCBI), the incidence of bleeding for patients taking warfarin has been estimated at 15-20% per year. Life-threatening bleeding due to warfarin has been estimated at a rate of 1-3% per year. Thus, a rise in demand for anticoagulant therapies is further creating potential opportunities for reversal agents for anticoagulants.

In 2019, the idarucizumab segment accounted for the largest share of 36.77% and is anticipated to maintain its lead over the forecast period. This is attributed to the high revenue generation by idarucizumab in major geographies. Based on product type, the market is segmented into prothrombin complex concentrates, phytonadione (vitamin K), andexanet alfa, idarucizumab, protamine, and others.

The andexanet alfa segment is anticipated to expand at a lucrative CAGR during the forecast period due to the approval and launch of andexanet alfa in key markets. In April 2020, the Centers for Medicare & Medicaid Services (CMS) set a permanent J-code for Andexxa, facilitating its reimbursement in the hospital outpatient settings. Thus, a favorable reimbursement scenario for andexanet alfa in major markets is anticipated to support the segment growth throughout the forecast period.

Hospital pharmacy dominated the market with a 49.2% share in 2019. This is attributed to the fact that hospitals are the primary centers for the diagnosis and treatment of different types of bleeding disorders. Uncontrolled bleeding during emergency conditions is further driving the segment. On the basis of the distribution channel, the market is classified into retail pharmacy, hospital pharmacy, and online pharmacy. 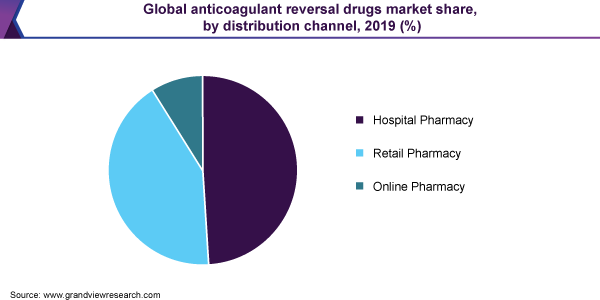 Retail pharmacy accounted for the second-largest share in 2019. These include specialty pharmacy and other retail pharmacies. Specialty drugs represent an important and growing part of the future pharmacy business. In addition, the high penetration of retail pharmacies in emerging economies that have limited access to hospitals and online pharmacies can be responsible for the segment growth.

North America held the largest revenue share of 39.62% in 2019 and is expected to maintain the lead throughout the forecast period. The U.S. accounted for the leading share in the North American market. Key factors contributing to its growth include high healthcare expenditure and favorable healthcare reimbursement policies for costly drugs. In addition, the easy availability of these reversal drugs during emergency conditions is driving the regional market.

Asia Pacific is expected to grow at the fastest rate during the forecast period. The presence of a large target population in emerging economies, such as China and India, has significantly supported the regional market growth. In addition, increasing awareness and rising incidence of bleeding disorders in the region are propelling the demand for anticoagulant reversal drugs in this region.

Key companies are engaged in strategic initiatives, such as new product development and collaborations, in order to gain a significant market share. For instance, in April 2018, Boehringer Ingelheim announced the full FDA approval of its Praxbind (idarucizumab). It is a specific reversal agent for Pradaxa. Some prominent players in the global anticoagulant reversal drugs market include:

This report forecasts revenue growth at the global, regional, and country levels and provides an analysis of the latest industry trends and opportunities in each of the sub-segments from 2016 to 2027. For the purpose of this study, Grand View Research has segmented the global anticoagulant reversal drugs market report on the basis of product type, distribution channel, and region:

How big is the anticoagulant reversal drugs market?

What is the anticoagulant reversal drugs market growth?

b. North America dominated the anticoagulant reversal drugs market with a share of 39.6% in 2019. This is attributed to the presence of well-established healthcare infrastructure and favorable reimbursement policies for costly drugs.

Who are the key players in the anticoagulant reversal drugs market?

What are the factors driving the anticoagulant reversal drugs market?