The Asia automotive camshaft market size was valued at USD 1.86 billion in 2020 and is expected to expand a compound annual growth rate (CAGR) of 3.0% from 2021 to 2028. Increasing sales of passenger cars and commercial vehicles, coupled with the increasing adoption of double overhead camshaft engines in passenger cars, are expected to drive the market growth over the forecast period. Moreover, stringent government regulations associated with carbon emission have forced automotive OEMs to adopt lightweight engines, which is anticipated to boost the product demand in the near future. Automotive engine manufacturers are increasing the number of valves in the engine to enhance the volumetric efficiency and power output of engines, which can be achieved using a double overhead camshaft. 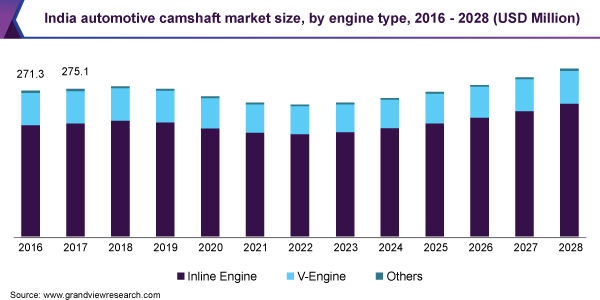 A double overhead camshaft incorporates four valves for each cylinder, two exhausts, and two intakes. The use of four valves per cylinder allows for a more effortless flow of gases and fuel, both in and out of the cylinder, thus increasing the performance of the vehicle, particularly, at high speeds. Thus, the rising adoption of double overhead camshaft engines is likely to fuel the market growth over the forecast period.

A promising rise in the sales of commercial and passenger vehicles across several countries in the region is also expected to drive the market. According to the International Organization of Motor Vehicle Manufacturers (OICA), over 91 million new passenger and commercial vehicles were registered or sold globally in 2019. Of this, over 44 million motor vehicles, or nearly 48% of the global total, were sold in Asia. This has led to a significant rise in product demand in the region.

The Covid-19 pandemic has negatively impacted the overall product demand in 2020. Globally, several countries announced lockdowns and social distancing norms subsequently leading to losses for industries, such as manufacturing, automobile, entertainment, restaurant, and hospitality. This resulted in a decline in the overall automotive production volumes, globally, on a year-on-year basis. However, as governments begin to gradually relax the lockdown norms and allow businesses to operate with mandates of social distancing, the market can expect a period of respite for the short-term due to the growing demand for passenger cars.

The inline engine segment accounted for the largest share of over 76% in 2020 and is estimated to retain its dominance over the forecast period. The segment is projected to expand at the fastest CAGR from 2021 to 2028 due to a surge in demand for small & compact, lightweight & economical, and more fuel-efficient engines. Inline engines are the most common engines used in hatchbacks, SUVs, and trucks. L3, L4, and L6 are the most preferred engine configurations across Asia.

The V-engine segment is projected to expand at a CAGR of 2.4% over the forecast period. V-engines are generally used in premium, luxury, and sports cars. The increasing demand for premium and luxury cars across emerging economies, such as China and India, is expected to support the growth of this segment. However, high costs and complex designs could restrict the segment’s growth over the forecast period.

The gasoline segment captured the largest revenue share of over 68% in 2020 and is expected to retain its dominance growing at the fastest CAGR over the forecast period. Gasoline cars comply with most of the countries’ emission regulations. They are efficient and emit fewer gases as compared to their diesel counterparts. Rising demand for gasoline across countries, including China and India, is anticipated to drive the segment growth.

According to the International Energy Agency (IEA), the gasoline demand will continue to rise over the next few years. The diesel segment is projected to expand at a CAGR of 2.9% from 2021 to 2028. Diesel cars are still in high demand due to the high compression ratio, which allows for better efficiency than gasoline engines. A diesel engine is more straightforward than a gas engine as it has no associated electrical system and the spark plugs needed for it.

The cast camshaft segment held the highest market share of over 46.3% in 2020, followed by the forged camshaft segment. These two conventional manufacturing processes have been in use for several years. Cast camshafts offer several advantages, such as dimensional accuracy and smooth surface finish. However, the momentum in the automotive industry is gradually shifting toward assembled camshafts. The assembled camshaft segment is expected to witness substantial growth over the forecast period owing to its cost-effectiveness and lightweight nature.

These camshafts are robust and durable, resulting in the optimized performance of the overall powertrain, thereby improving the vehicle’s fuel efficiency. Furthermore, the process leads to higher tensile strength and allows for higher flexibility to optimize all components in terms of cost, material, and performance in the manufacturing process. According to MAHLE GmbH, assembled camshafts are 45% lighter than cast and forged camshafts. However, cast and forged camshaft would not phase out completely owing to their applications in heavy-duty vehicles.

The passenger car segment captured the highest revenue share of over 79% in 2020 and is expected to retain dominance over the forecast period. The segment is estimated to expand at the fastest CAGR during the forecast period on account of the increasing vehicle fleet and rising per capita vehicles in the continent. Passenger cars occupied the majority share of over 75% of total vehicle production in the region in 2019.

The rising demand for passenger vehicles in emerging economies, such as China and India, is expected to drive the segment growth over the forecast period. The commercial vehicle segment is expected to register a CAGR of 2.5% from 2021 to 2028 on account of the increasing demand for heavy-duty trucks across the region’s logistics and transportation sectors.

The OEM segment held the dominant market share of over 89% in 2020 and is likely to retain its dominance over the forecast period, as camshafts are integrated during the vehicle manufacturing stage. OEMs comprise vehicle manufacturers, such as Volkswagen AG, General Motors, and BMW Motorrad. Since the camshafts offered by OEMs are highly durable, the segment is estimated to expand at the fastest CAGR over the forecast period. 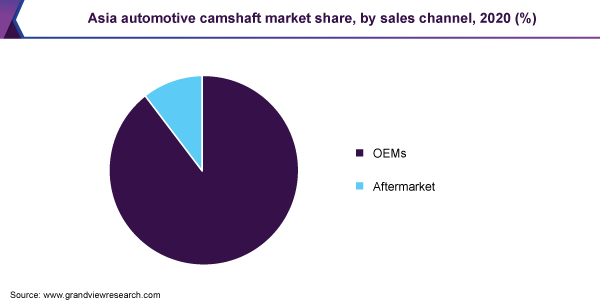 Aftermarket refers to the secondary market concerned with the distribution, manufacturing, installation, and retailing of all vehicle accessories and parts after the vehicle is sold. The aftermarket segment is anticipated to expand at a steady CAGR over the forecast period due to the increasing complexity of automotive camshafts. Currently, manufacturers in the market are focused on producing durable and lightweight products, which can increase the life span of automotive camshafts. This is anticipated to hamper the growth of the aftermarket segment over the forecast period.

The East Asia regional market accounted for the largest revenue share of 42.2% in 2020 and is expected to retain its dominance over the forecast period. The segment is also projected to register the fastest CAGR from 2021 to 2028 owing to the increased demand for passenger vehicles in Mainland China, followed by Japan. On the other hand, the Covid-19 pandemic has adversely affected the automotive sector and resulted in a significant decline in overall product demand. Moreover, favorable government regulations, such as incentive schemes, are likely to drive the demand for Electric Vehicles (EVs), which could further hamper market growth prospects.

The South Asia regional market is estimated to register the second-highest CAGR over the forecast period. South Asian countries are likely to provide promising growth opportunities to the market due to increasing disposable incomes and growing sales of passenger cars. Macro-economic factors, such as low labor costs and tax incentives, are likely to encourage investors to increase their focus on the region. The Make in India campaign is expected to draw substantial investments in the country’s automotive sector, which offers several benefits, such as low-cost labor as well as raw materials.

Organic growth remains the key strategy for the overall industry with a focus on mergers and acquisitions to expand the geographical reach and product offerings. For instance, in October 2019, PCL India acquired 76% shares of Fahrzeugtechnik GmbH and MFT Motoren and 51% of stake in EMOSS Mobile Systems BV through its PCL (International) Holding BV, a wholly-owned subsidiary in the Netherlands. This acquisition was aimed at enabling PCL India to establish a global brand presence.

Market players are also focusing on strategic expansion aimed at tapping untapped markets. For instance, in June 2019, ThyssenKrupp AG announced its investment of approximately USD 17.4 billion to construct a camshaft plant in Pécs, Hungary. The new manufacturing unit is intended to improve camshaft quality, increase research & development, and adopt advanced technologies across the production line. Some prominent players in the Asia automotive camshaft market include:

This report forecasts revenue growth at regional and country levels and provides an analysis of the latest industry trends in each of the sub-segments from 2016 to 2028. For the purpose of this study, Grand View Research has segmented the Asia automotive camshaft market report on the basis of engine type, fuel type, manufacturing technology, vehicle type, sales channel, and region:

How big is the Asia automotive camshaft market?

What is the Asia automotive camshaft market growth?

b. East Asia dominated the Asia automotive camshaft market with a share of 42.2% in 2020. This is attributable to the increasing demand for passenger vehicles in Mainland China, followed by Japan.

Who are the key players in Asia automotive camshaft market?

What are the factors driving the Asia automotive camshaft market? 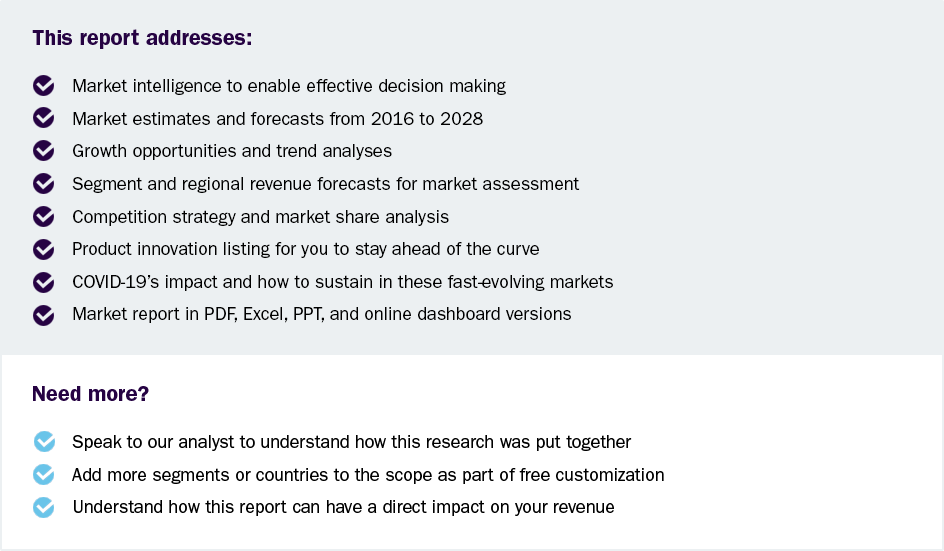