The Asia Pacific plastics in consumer electronics market size was valued at USD 3.7 billion in 2020 and is expected to expand at a compound annual growth rate (CAGR) of 4.0% from 2021 to 2028. The growth of the market is driven by the increasing adoption of bio-based polycarbonate by manufacturers of consumer electronics. Increased investments in research & development activities and the introduction of recycled polymers such as bio-based polycarbonate have been key factors offering a competitive advantage to the players in this market. 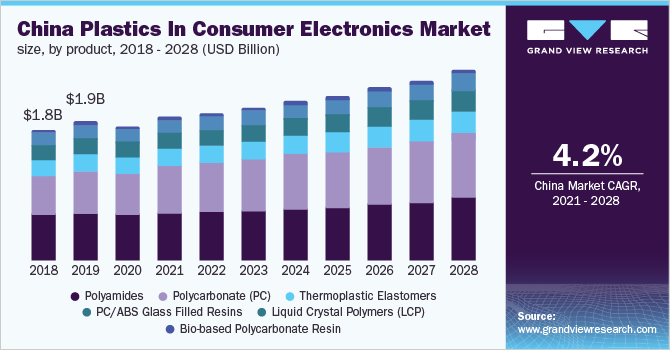 Stringent rules and regulations to monitor plastic consumption across the region, including the ban on plastic waste imports in China since 2017, are expected to act as a restraint for the growth of the Asia Pacific plastics market in consumer electronics in the near future. The Asia Pacific region has been the fastest-growing market for plastics due to their increased consumption for the manufacturing of various consumer electronics. The concept of engineering plastics has witnessed rapid involvement in the electronic industry in both developed and developing countries of Asia Pacific. This has been mainly due to the superior properties of plastics, which makes them an ideal substitute for metals.

The well-established manufacturing base for electronics in Taiwan and South Korea is anticipated to provide further impetus to the plastics market in the region. Quanta Computer, a Taiwan-based leading notebook manufacturer, has production and service locations in Asia Pacific, North America, Latin America, and Europe. Furthermore, Samsung Electro-Mechanics, a part of Samsung Group based in Korea, is engaged in the manufacture of wearables and flexible components for mobile phones.

As of 2020, China has been the leading producer and consumer of plastics in the region. The abundant availability of raw materials coupled with the low cost of production is expected to support plastic production in the country. In China, the plastic industry witnessed high production outputs in the past years owing to the growing demand for plastics in the electronic devices industry. Companies located in the U.S. and Europe are venturing and setting up manufacturing facilities in the Asia Pacific region on account of low labor costs and lenient government regulations. This is expected to drive the plastics market in the region over the coming years.

Other Southeast Asian countries such as Vietnam, Indonesia, Thailand, and others are expected to emerge as the primary markets for plastics in Asia Pacific over the forecast period as post-2016, the labor costs in China have accelerated. The growing manufacturing sector in the Asia Pacific region is expected to propel the demand for plastic compounds in automotive, industrial machinery, construction, packaging, and electrical and electronics industries.

The polyamide product segment led the Asia Pacific plastics in consumer electronics market and accounted for more than 35.0% revenue share in 2020. Polyamides are used for manufacturing casings for television sets, laptops, mobile phones, and others due to high rigidity, sliding friction, dimensional stability, and chemical resistance. Rising demand for consumer electronics across the region is expected to propel the demand for polyamides.

PA9T polyamide offers properties such as superior balance, low water absorption, and high chemical, heat, and abrasion resistance. PA9T is suitable for manufacturing electronic components that require heat resistance and dimensional stability, such as connectors, switches, relays, components of 3D circuits, bobbins, and other parts for computers and portable communication devices such as mobile phones.

The laptop monitor enclosures segment led the market and accounted for the largest revenue share of more than 22.6% in 2020. The outbreak of the COVID-19 pandemic negatively impacted the emerging economies, especially India. Academic institutes and various multinational companies had to adopt work from home policies to contain the spread of the virus.

In addition, public engagement on regular entertainment sources such as YouTube, gaming, OTT platforms, and others drastically increased. Increased live game streaming to public entertainment witnessed a rapid increase in the region propelling the demand for advanced laptops and personal computers. 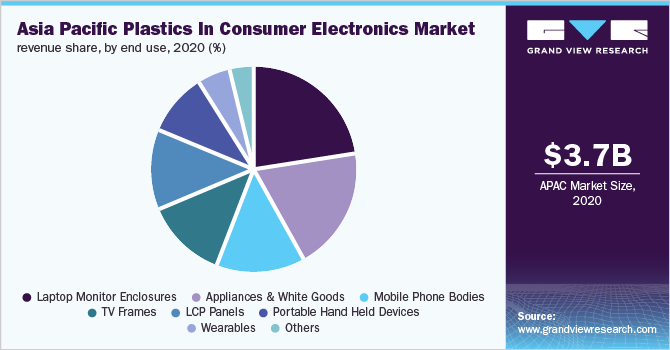 This increase in demand has propelled the use of plastic resins for manufacturing laptop monitor enclosures due to their high durability. Hence, the demand is expected to increase throughout the forecast period across the region.

Increasing utilization and easy availability of high-speed internet along with the introduction of 5G network and fiber technology in countries like India, coupled with the ever-expanding need for seamless communication, digital entertainment, and demand for wireless networks, the media, and entertainment industry is gradually emerging have increased the demand for smart television across the region.

Furthermore, the growing inclination toward over-the-top (OTT) streaming in audiovisual content has propelled television manufacturers to introduce internet-based smart television devices to the market. This has increased the demand for plastic resins including polycarbonate, polyamides, and others for manufacturing TV frames, and is expected to increase over the forecast period.

Haier, Hisense, Huawei, Lenovo Group Limited, Sharp Corporation, Xiaomi, and Guangdong Oppo Mobile Telecommunications Corp., Ltd., are some of the major consumer electronics companies operating in China. Increasing demand for energy-efficient appliances, rising brand awareness among consumers, and growing emphasis on design and features of white goods & appliances are anticipated to positively influence the demand for consumer electronics, further propelling the demand for plastics in China over the forecast period.

Increasing demand for appliances in the country is anticipated to create significant demand for plastics. Due to the establishment of the IT sector in India, consumers have become tech-savvy. Also, migrating to metropolitan cities due to work opportunities has witnessed a rise in single-person households and nuclear families. Hence, this has propelled the need for consumer electronic devices like washing machines and microwave ovens that considerably reduce the time and effort spent on everyday chores. Major factors driving the growth of electronic appliances include a focus on energy-efficient products, increased affordability, and increasing digital penetration.

Smartphones, laptops, and PCs are witnessing significant demand in the country due to e-learning and work-from-home policies amid the COVID-19 outbreak. Initiatives such as ‘Make in India’ and 100% FDI in electronics are anticipated to attract consumer electronics manufacturers to set up their facilities in the country. For instance, in December 2020, SAMSUNG announced to relocate its mobile and IT display production unit from China to NCR, Uttar Pradesh, India, with an investment of USD 650 million.

The market is highly characterized by the expansion and joint venture strategies opted by plastic companies across the region. In addition, major players in the market compete based on their application development capabilities and emerging technologies used in plastic. The Asia Pacific plastic market in consumer electronics has various key players such as SABIC; Trinseo S.A.; Mitsubishi Chemical Corporation; Covestro AG, as well as a few medium and small regional players operating in different parts of the world.

Established players such as Trinseo S.A. are investing in the production of resins in the Asia Pacific region and meet the growing market demand, which gives them a competitive edge over the other players. In December 2020, Trinseo S.A inaugurated its thermoplastic elastomers (TPE) facility in Hsinchu, Taiwan, to locally manufacture custom-engineered thermoplastic elastomers and serve the customers in the consumer electronics market in the Asia Pacific region, and enhanced its growth strategy for TPE. Strategic partnerships, capacity expansions, and the development of new products are popular strategies adopted by most players operating in the market. Some of the prominent players operating in Asia Pacific plastics in consumer electronics market are:

This report forecasts revenue and volume growth at regional and country levels and provides an analysis of the latest industry trends in each of the sub-segments from 2017 to 2028. For this study, Grand View Research has segmented the Asia Pacific plastics in consumer electronics market report based on product, end use, and country:

How big is the Asia Pacific plastics in consumer electronics market?

b. The APAC plastics in consumer electronics market size was estimated at USD 3.7 billion in 2020 and is expected to reach USD 3.0 billion in 2021.

What is the Asia Pacific plastics in consumer electronics market growth?

Who are the key players in Asia Pacific plastics in consumer electronics market?

What are the factors driving the Asia Pacific plastics in consumer electronics market?