The global athletic footwear market size was valued at USD 127.3 billion in 2021 and is expected to expand at a compound annual growth rate (CAGR) of 4.9% from 2022 to 2030. Growing enthusiasm and awareness regarding the health benefits of sports and fitness activities, the flourishing retail e-commerce sector worldwide, and rising levels of disposable income of consumers are estimated to be the key trends stoking the market growth. Youngsters are getting keen on adopting a healthy lifestyle and are hence participating actively in sports and other related activities. At the same time, people have started realizing that sports and fitness activities can help ensure good health and reduce the risk of chronic disorders such as depression, cardiovascular diseases, and diabetes. 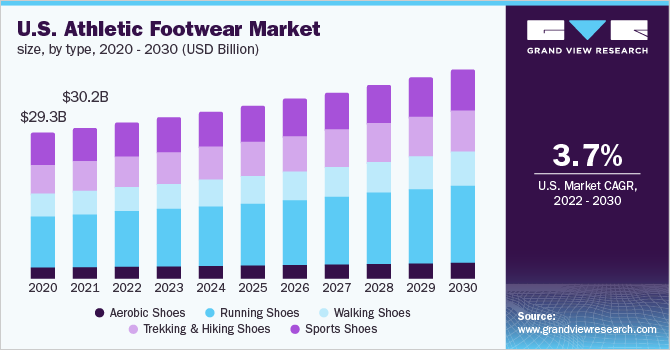 Covid-19 has had a significant impact on U.S. athletic footwear and activewear businesses. In terms of brands, Nike brand footwear sales declined in the high teens, Brand Jordan was down in the low teens, and Converse dropped by more than 30%. Adidas, Skechers, ASICS, and Vans declined in the teens, Under Armour was down about 25%, and Fila declined by nearly half.

On looking at specific categories, those pertaining to spring sports were the hardest hit as most of these sports have been canceled or postponed - baseball, soccer, and golf shoe sales declined an average of 30%. Performance basketball and sports lifestyle each declined in the mid-teens. Running footwear sales also dropped in the mid-teens, and skate shoes (which were fast-growing before the pandemic) were also hard hit in the period. On the bright side, Brooks had a mid-single-digit increase and Puma improved in the low singles.

People are also increasingly realizing the importance of using the appropriate type of shoes for sports activities to prevent muscle injuries, leg injuries, knee pain, hip pain, and back pain. As a result, the demand for athletic shoes is expected to register a sharp rise over the coming years. The demand for athletic footwear products is increasing rapidly owing to their usage in various conditions. Athletic footwear products are used by various consumers such as athletes and climbers. In addition, there are fitness-conscious customers, gym-goers, and people who use them for mild fitness routines. Various types of athletic footwear available in the market are prepared from high-quality raw types, such as leather, foam, and plastic, which involve the use of advanced chemical additives.

Increasing environmental concerns are restraining the growth of the athletic footwear industry. The active measures taken by the government and environmental groups toward pollution act as a restraint for the market. Industry is one of the main causes of the pollution of the rivers and environment. For instance, Puma along with other sportswear brands including Nike and Adidas was addressed as ‘Dirty Laundry’ as the subject of a report by the environmental group Greenpeace. Puma was accused of working with suppliers in China who, according to the report, contributed to the pollution of the Yangtze and Pearl rivers.

Prominent players in the market, such as Nike, Inc.; Adidas AG; Skechers USA, Inc.; and New Balance Athletics, Inc. are focusing on developing innovative technologies to increase the stability of sports shoes and make them comfortable. For instance, Adidas AG has innovated a Forged Mesh, a single-layer shoe upper with a ribbed pattern created using ARAMIS motion capture technology for determining the strain exerted on the foot. The technology helps provide maximum flexibility and adequate support along the ankle to ensure free foot movement. Other technologies patented by Adidas AG include Adaptive Traxion, Boost, Bounce, Climachill, Promeknit, and Stableframe.

The running shoe segment dominated the market in 2021 with a revenue share of over 35.0%, which can be attributed to the daily usage of running shoes and the availability of these shoes in a wide range of prices ranging from affordable athletic shoes to highly luxurious athletic shoes. Running shoes include shoes required for training, advanced running, road running, trail running, track running, and racing. The sports shoe segment has been further reviewed based on prominent sports in each of the regions. For instance, the sports shoe market in the U.S. encompasses baseball, basketball, American football, ice hockey, tennis, and golf.

The trekking and hiking shoe segment is anticipated to exhibit a healthy growth rate during the forecast period owing to technological advancements that have ensured more comfort and flexibility for hikers. For instance, W.L. Gore & Associates, Inc. in association with Salewa introduced the first version of surround technology. The technology features GORE-TEX laminates that are assimilated into the shoe upper of trekking and hiking shoes to surround the foot from all sides and expel the sweat and heat out of the shoes through side ventilation.

The men's segment held the largest revenue share of over 55.0% in 2021. The segment will continue to dominate the market until 2030. Women’s footwear is catching up gradually as the popularity of sports continues to grow among women, particularly in markets previously unexplored. In most developed countries, the proportion of women athletes representing their respective nations at major sporting events is significant as compared to developing and underdeveloped countries. 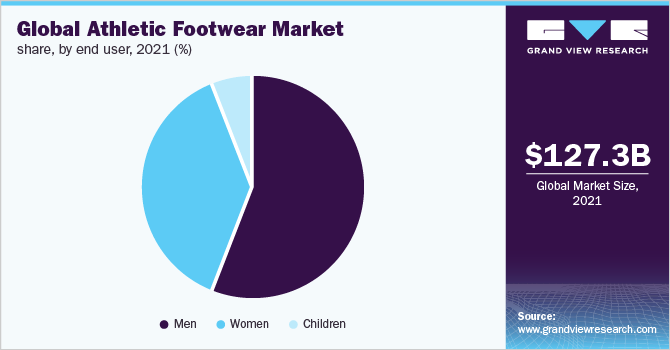 In addition, the overall level of awareness regarding fitness among women is considerably high in advanced countries as compared to developing countries. However, the scenario is changing gradually in developing countries in line with efforts being carried out by respective countries’ governments to encourage women to participate actively in sports and other fitness-related activities. This is likely to boost the sales of women’s athletic footwear considerably in emerging markets.

Asia Pacific dominated the market with a revenue share of over 35.0% in 2021. The region is projected to continue to lead the market over the forecast period. APAC is expected to register the highest growth rate over the forecast period. Rising levels of disposable income and growing penetration of e-commerce are estimated to play a major role in driving the demand for athletic footwear in Asia Pacific. Increasing enthusiasm for participating in various sports events, including the Asian Games, the ICC Cricket World Cup, and the ACC Asia Cup, is supplementing the growth of the regional market.

In 2017, Asia Pacific accounted for the highest shipments at around 260 million units and is anticipated to maintain its lead from 2018 to 2025. This can be primarily attributed to a wide population base and lower average selling price of athletic footwear in the region as compared to developed economies, such as the U.K. and the U.S. The U.S. is the key revenue contributor to the regional market growth, which can be attributed to high enthusiasm among the citizens for sports, fitness, and adventure activities, such as aerobics, hiking, training, and trail running.

The market includes both international and domestic participants. Key market players focus on strategies such as innovation and new product launches to enhance their portfolio offering in the market. In March 2021, a Kanye west inspired line of sneakers was launched by Adidas as the Yeezy series 450 as a sequel to Yeezy 350 series. In June 2021, Kiko Kostadinov’s ASICS GEL-Quantum Levitrack was launched, with a GEL midsole. Some prominent players in the global athletic footwear market include: -

This report forecasts revenue growth at the global, regional, and country levels and provides an analysis of the latest industry trends and opportunities in each of the sub-segments from 2017 to 2030. For the purpose of this study, Grand View Research has segmented the global athletic footwear market report based on type, end user, and region:

How big is the athletic footwear market?

What is the athletic footwear market growth?

What are the key trends of the athletic footwear market?

b. Customers are realizing the importance of using the appropriate types of shoes for sports activities in order to prevent muscle injuries, leg injuries, knee pain, hip pain, and back pain.

How big is the athletic footwear market in U.K.?

What are the factors driving the athletic footwear market?

b. Key factors that are driving the market growth are growing enthusiasm and awareness regarding the health benefits of sports & fitness activities, the flourishing retail e-commerce sector worldwide, and rising levels of disposable income of consumers.