The global augmented reality headsets market size was valued at USD 1.64 billion in 2018 and is expected to grow at a compound annual growth rate (CAGR) of 73.8% from 2019 to 2025. Increase in investments in augmented reality (AR) technology by the industries is anticipated to drive the growth. Moreover, the growing usage of enhanced graphical objects to improve consumer experience among the enterprises further enhances the growth. Also, the rise in immersive technology for improving consumer experience favors the development of the market. 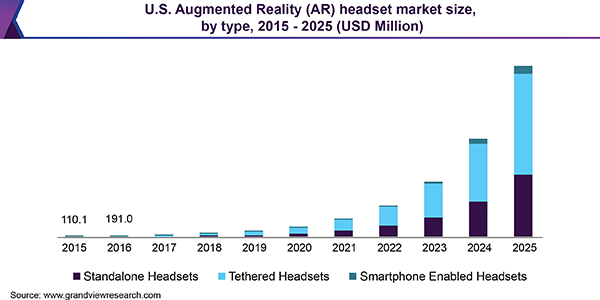 AR headsets help users understand the real-time instances of objects around the surroundings using the camera. As a result, enterprises from industries, such as education, healthcare, entertainment, and retail are adopting AR technology to provide end-user with a real-life 3D immersive experience. The rising trend of overlaying virtual objects around the environment and the need to experience the objects is expected to contribute to the product demand. For instance, the Microsoft HoloLens-an AR headset- helps users interact and detect analytical information about the displayed products during trial.

The importance of augmented reality is growing with the rising awareness about the applications of smart wearables and Head-mounted Displays (HMD) in the AR technology. The enterprises are increasingly investing in the edge computing frameworks to improve their marketing and advertising and training business operations. As per the research on AR spending, it was observed that enterprise investment on AR technology was experienced more for the promotions, marketing and advertising and R&D activities in 2018 as compared to 2016. The resulting rise in awareness regarding the advantages of AR headsets among the enterprises led to a considerable increase in the shipments of AR headsets from 2015 till date.

The AR headset technology also presents ample opportunities to the new and existing businesses. The application in remote assistance and collaboration is anticipated to drive the product adoption in the forthcoming years. The headset enables the user to collaborate and interact with other users present in a disparate geographical location using 3D models. For instance, in February 2019, Spatial a 3D and AR/VR service provider demonstrated a collaboration platform for Microsoft HoloLens. The spatial room would enable improved hand tracking, eye tracking, and interactive communication using the HoloLens. Thus, presents an emerging trend towards virtual communication with the remote users and anticipates driving the augmented reality headsets market.

Increase in funding and investment by the venture capitalists, large technological firms, and VR enterprises in the AR headset startups contributes to the market growth. In 2018, Rokid, a China-based AI, AR, and robotics R&D company raised USD 100 million from CDIB Capital, Credit Suisse, and IDG capital in a Series B funding; for the mass production of Rokid smart glass. In the same year, Magic Leap secured an addition of USD 461 million funding from a Saudi Arabian Public Investment Fund (PIF). The company has raised overall USD 2.3 billion in funding till date to manufacture augmented reality based smart glasses.

On the basis of type, the AR headsets market is trifurcated into standalone, tethered, and smartphone-enabled headsets. The tethered headsets were the foremost or introductory devices in the industry. The product demand is primarily attributed to the enterprises which uses high performance AR applications and immersive objects. For instance, Seiko Epson Corporation helped Volkswagen AG’s training department to improve its training functions with the help of Moverio BT-200 smart glasses. The glasses were used to overlay complex illustrations into real life scenarios enabling easy understanding for the employees.

The standalone headsets segment dominated the market with a revenue share of over 48% in 2018. The standalone headsets comprise optical see-through, near-eye display, and LCoS technology cameras. Thus, these products provide immersive experience without the help of any system or smartphone. Increasing usage of low-price imaging sensors, microphones, and other sensors is anticipated to reduce the prices over the forecast period.

Based on application, the market has been segmented into enterprise and consumer. The enterprise application segment dominated the market and accounted for more than 84% revenue share in 2018. The growth is attributed to the increasing usage of these devices to improve advertisement, product assortment, research, catalogue management, and information visibility led to the adoption of AR headsets among enterprises. Moreover, application for remote monitoring and machine visioning among construction and automobile industry is contributing to the growth. 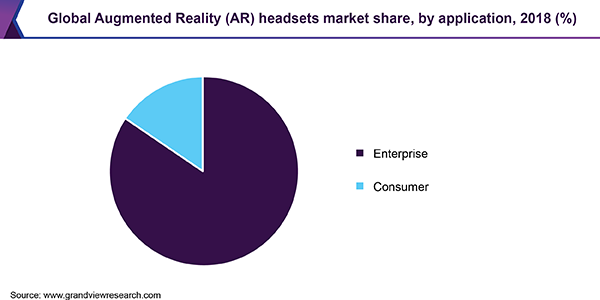 The consumer segment of the market for AR headsets is in its infancy stage. Currently, the market players are manufacturing headsets for the developers and enterprise-level experience. However, the rising adoption of AR apps and smartphone users is expected to drive the adoption of the product. Moreover, technological advancements, better field of view, and usage of high-performance sensors at a reduced price coupled with the growing adoption of smart glasses is anticipated to strengthen the consumer application segment over the forecast period.

North America held the dominant market share of over 38% in terms of revenue, in 2018. A rise in AR spending by the enterprises coupled with rise in AR startups is expected to fuel the regional market growth. As per a recent study, North America witnessed a high growth in the investments in AR technology from 2015 to 2018. The U.S. dominated the market in 2018 with the presence of significant market players and increased headsets shipments.

Asia Pacific is anticipated to expand at the fastest CAGR over the forecasted period. The growth can be attributed to the rise in AR spending, increasing AR headset shipments, and the rise in the availability of AR apps. China is expected to lead the regional market over the forecast period. The increase in R&D efforts along with increasing investments in China is expected to drive the growth. As per the U.S. Defense Innovation Unit (DIU), the Chinese investors participated in more than USD 2.1 billion worth of deals from 2010 to 2017. For instance, in 2016, Alibaba Group and Enjoyor Group along with Google and other investors provided USD 798.5 million of funding to Magic Leap, a U.S. based AR headset provider. In the same year, Tencent, Lenovo, Horizon Ventures, Ningbo GQY, and Banyan Capital invested USD 50 million in Meta, a California based AR headset provider.

The market is in a nascent stage, registering high investments, prototype developments, reference designing, and limited shipments to the developers and enterprises. It is marked by the presence of both large technology giants and startups. Moreover, the market also displays a rise in divestment and acquisition strategies. For instance, in September 2019, DAQRI announced the closure of its AR headset business and sale of its smart glasses’ assets. However, in May 2019, Lenovo introduced its first enterprise-level AR headset.

The major market players include Google LLC, Magic Leap, Microsoft, VUZIX, Seiko Epson Corporation, Osterhout Design Group, Kopin Corporation, and Sony. The vendors engage in the introduction of new products and expect to undergo mass production. For instance, in May 2019, Google LLC launched the Google Enterprise Edition 2, which features Qualcomm Snapdragon XR1 platform with improved camera performance than its previous version. The market also envisages the entry of new players such as Lenovo, RideOn, Orcam, and many more. Thus, the increase in product introduction coupled with rise in new entrants is expected to contribute to the market growth. Some of the prominent players in the augmented reality headsets market include:

This report forecasts revenue growth at global, regional, and country levels and provides an analysis of the latest industry trends in each of the sub-segments from 2015 to 2025. For the purpose of this study, Grand View Research has segmented the global augmented reality headsets market report on the basis of type, application, and region:

How big is the augmented reality headsets market?

b. The global augmented reality (AR) headsets market size was estimated at USD 2.8 billion in 2019 and is expected to reach USD 4.9 billion in 2020.

What is the augmented reality headsets market growth?

b. The enterprise application segment dominated the market and accounted for 84.3% of the overall market share in 2019. The growth is attributable to the growing usage of AR headsets for remote assistance & collaboration and to improve advertisement, product assortment, with enhanced information visibility.

Who are the key companies/players in augmented reality headsets market?