The global biodegradable mulch films market size was valued at USD 43.03 million in 2021 and is expected to grow at a compound annual growth rate (CAGR) of 7.8% from 2022 to 2030. Increasing demand and need for food crops owing to the rise in global population. Depleting arable and agricultural land in developed economies is a major challenge for the global agriculture industry. These biodegradable films offer a limited solution to this fast-developing problem by increasing crop yield and hence help in catering to major issues including water conservation, soil pollution, and climatic change. There has been a rapid rise in the global population, and this trend is expected to continue during the forecast period. 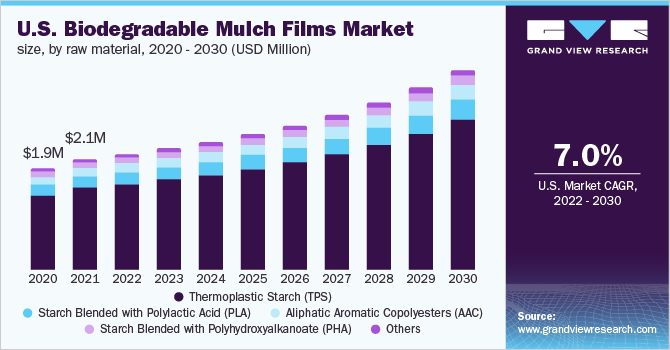 The market is bound to benefit from this trend as these films provide effective crop protection, increased yield, and enhanced production cycles. To cater to the rising demand due to the increased per capita consumption of food, efforts have been taken to cultivate high-quality food crops, which provide a better yield. Agricultural mulch films help in increasing yield by speeding up the germination cycles, preventing direct contact of the crop with soil, and by keeping the fertilizers and nutrients closer to the crop. Thus, the demand for biodegradable mulch films is expected to increase during the forecast period.

The TPS segment dominated the global and accounted for the maximum share of more than 73.0% of the overall revenue in 2021. TPS degrades into harmless products when it is placed in soil. Growing environmental concerns regarding conventional synthetic polymers used in the production of agricultural films have shifted the focus toward the use of biodegradable materials, which are made from renewable resources. The aforementioned factors are anticipated to raise thermoplastic starch demand in biodegradable mulch film production. Crops, which have high starch content in them are the major source of food calories.

However, it is commonly thought of as bad cards or thickener for gravies and sauces. Starch is used to prepare TPS, which flows at elevated pressure and temperature. The high demand for TPS can be attributed to the easy availability of starch at low prices coupled with an inability to produce any harmful products when placed in soil.PLA is one of the most promising biopolymers manufactured from lactic acid and starch. Alternatively, it is also produced chemically by treating sugar and starch. It can be processed by using ordinary equipment. PLA products are gaining popularity in various applications, especially in those that have a short shelf life.

Increasing government incentives, consumer awareness, and availability of raw materials are the major factors for the market growth. However, the cost of PLA is higher than synthetic plastics, which may hamper the market growth.PHA are biodegradable plastics, which are prepared by synthesized microbial fermentation of sugar or glucose. PHA has been used in the fixation and orthopedic applications, production of bioplastics, tissue engineering, food services, packaging, agriculture, and pharmaceutical industry. Enhanced properties of PHA bring additional value to the applications in which they are used. Advancement in the industrialization process of PHA is expected to drive the cost of PHA and make it a substitute for conventional plastic.

On the basis of crop types, the market has been further segmented into fruits & vegetables, grains and oil seeds, and flowers & plants. Fruits & vegetables were the major crop type segment and accounted for more than 51.0% of the global biodegradable mulch film demand in 2021. This segment is anticipated to expand further at the fastest CAGR from 2022 to 2030. The use of biodegradable mulch films reduces fruit rot by preventing contact between fruit & soil and improving the product quality. Biofilms’ demand for grains and oil seeds is anticipated to witness above-average growth in the coming years. 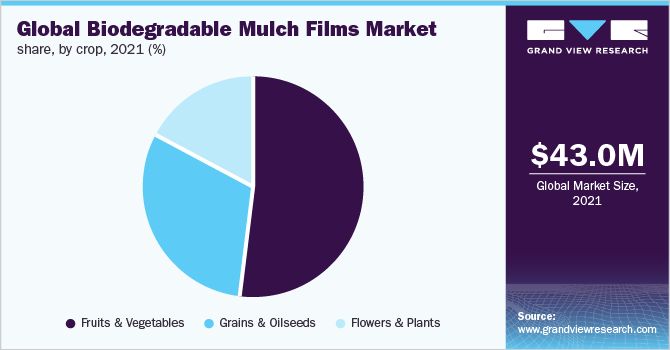 Growing grain and oilseed production, particularly in the Asia Pacific region, is anticipated to raise biofilms demand over the next few years. The grains & oilseeds segment is also projected to expand at a significant CAGR during the forecast period owing to a rise in the global population. The use of biodegradable agricultural films helps solve various environmental issues, such as harmful waste disposal caused by conventional plastic films. Biopolymers have the potential to influence the soil permeability, density, texture, structure, evaporation, and infiltration rates of water through soils owing to their physical properties.

Biodegradable films are mostly used in agricultural applications where acreage is scarce and agricultural goods are in high demand. Mulch films made from biodegradable materials are used in plant cropping & growth in the early season. Weed growth is controlled by black mulch films. White coatings reflect sunlight onto the plants. In every situation, available water is used more efficiently. The thickness of most mulch films ranges from 10 microns to 50 microns and these are available in widths of up to 3 meters.

The Asia Pacific dominated the global market and accounted for more than 63.0% of the total demand in 2021. China was the leading biofilms consumer in 2021 owing to the growing industrialization and urbanization that has led to higher living standards and a rise in demand for food products. Thus, growing food demand in the country supports the market growth. Biodegradable mulch film demand in Europe was signed in 2021. Europe is anticipated to witness moderate growth in the near future owing to the increasing adoption of eco-friendly products. These mulch films do not require waste disposal and represent a sustainable mulching alternative and have wide acceptance in the region.

In 2021, North America also accounted for a considerable share. Favorable government laws surrounding eco-friendly products, particularly in North America, are expected to have a beneficial influence on market growth. Growing public concerns over plastic mulch residues in soil are likely to drive product penetration over the next eight years. Biodegradable films can give the benefits of plastic mulch while eliminating the need for removal and disposal and reducing the environmental effect. Increasing population and supporting regulations formed by various European Union countries coupled with the rising environmental concerns about synthetic counterparts are anticipated to drive the market growth.

Major players in the market are involved in the research & development for the production of superior-quality films that provide improved features. In addition, the companies are also adopting technological collaborations to boost their efforts in R&D activities. The products are generally distributed through the company-owned distribution channels; however, third-party distribution channels are also employed. The companies lay high emphasis on expanding the area of operation to increase their market share. The global biodegradable mulch films market is highly fragmented owing to the presence of a large number of manufacturers across the globe, which include:

This report forecasts revenue growth at global, regional, and country levels and provides an analysis of the latest industry trends in each of the sub-segments from 2019 to 2030. For this study, Grand View Research has segmented the global biodegradable mulch films market report based on raw material, crop, and region:

How big is the biodegradable mulch films market?

What is the biodegradable mulch films market growth?

b. Fruits & vegetables segment dominated the biodegradable mulch films market with a share of 51.52% in 2021. This can be attributed to the ease of application owing to the perennial nature of crops.

Who are the key players in biodegradable mulch films market?

What are the factors driving the biodegradable mulch films market?

b. Key factors that are driving the biodegradable mulch films market growth include increasing demand in greenhouse applications coupled with rising environmental concerns about synthetic counterparts.