The global bioresorbable polymers market size was estimated at 298 tons in 2015. The biocompatibility and cost-effectiveness of the products coupled with the rising demand in medical applications are expected to steer the industry penetration.

Bioresorbable polymers have an advantage of completely biodegradable inside the human body, which allows the physician to eliminate the need for a second surgery to remove temporary implants. It also reduces the post-surgery risk to the patient without posing a threat to the human body.

North America bioresorbable polymers industry dominated the global demand owing to increasing product consumption in drug delivery and orthopedics applications in the region. The U.S. is the major R&D hub for the medical sector, which is also expected to raise the demand. 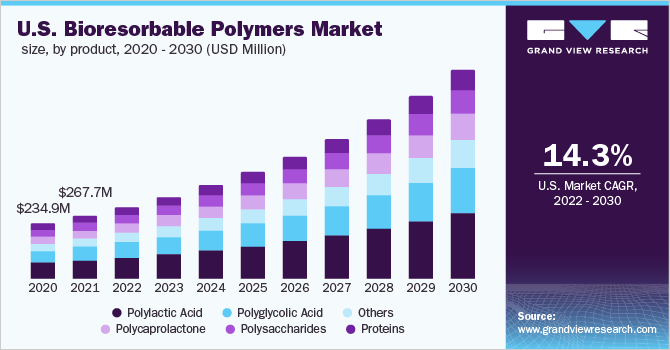 The product demand has grown significantly in recent years owing to the increasing healthcare awareness among patients coupled with high consumer disposable income in mature economies globally. The extensive efforts by governments to upgrade their health sector are also anticipated to drive product growth.

Bioresorbable polymers cost more than conventional polymers owing to their technological sophistication, which remains the major factor hindering the product growth over the past few years. The lack of advanced healthcare infrastructure in developing regions such as Asia Pacific and Latin America also hampers the market expansion.

Additive manufacturing and electrospinning technologies have gained popularity in drug delivery, implant design, and tissue engineering. Electrospinning is used to produce nanometer fibers from polymer solutions for fabricating structures and materials that closely mimic the cellular matrix within the body tissues, making them helpful in repairing and re-growth of damaged tissue applications. The biodegradable property of bioresorbable polymers makes them an ideal choice for electrospinning and additive manufacturing, thus driving their market demand over the forecast period.

Population over 65 years is more prone to lowering bone density and weakening bone strength. The geriatric population forms the key target population for the bioresorbable polymers, and the rapidly increasing aging population is anticipated to boost the growth of the market over the forecast period.

Strict regulations associated with product certifications are likely to increase the expenditure for approvals and may pose a challenge to the small enterprises in the healthcare industry. This, in turn, is likely to impact the growth of the bioresorbable polymer market over the forecast period.

Polylactic acid (PLA) based bioresorbable polymers dominated the overall market while accounting for over 29% of the total demand in 2015. PLA-based product has the advantage of getting naturally converted into lactic acid in the body at low concentrations and can be safely removed by the body’s excretory system.

Polyglycolic acid (PGA) is another product category widely used in surgical sutures in medical applications. The polyglycolic acid copolymer (PLGA) is a well-known alternative for PLA in the orthopedic application, which is anticipated to increase the PGA-based product demand.

Polycaprolactone (PCL) is a biomedical polymer that is mostly used in bone tissue engineering. Owing to its low cost, biocompatibility, and high mechanical strength compared to other polymers have led to significant product demand. The PCL-based bioresorbable polymers market is estimated to reach a net worth exceeding USD 88 million by 2025.

Polysaccharides are used in drug delivery systems, and its cost of production is high as compared to the synthetic polymers. In many cases, there is a requirement for additional chemical modification for using polysaccharides which renders them less competitive than other alternatives. Polysaccharides with its biocompatibility, water-solubility, biodegradability, and the ability to form hydrogels, are anticipated to expand the penetration in drug delivery systems over the upcoming years.

The primary applications include drug delivery and orthopedics in the medical sector. The other application areas include tissue engineering, pediatrics, and wound management. Orthopedics emerged as the largest application segment while accounting for over 43% of the total revenue in 2015, owing to its high demand in the trauma and knee sub-applications. 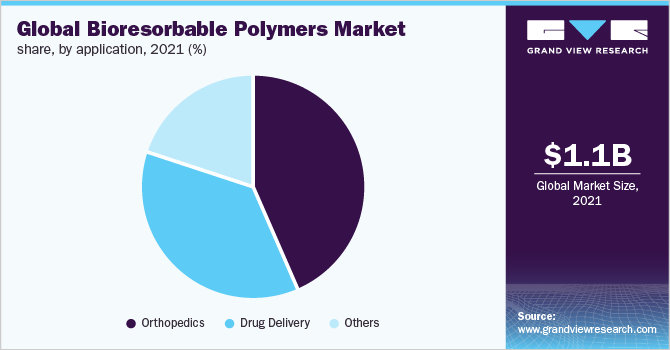 The drug delivery application is anticipated to witness the fastest growth rate at over the forecast period. The increasing demand for these polymers in drug delivery application is due to the patient’s non-willingness to take injections or other procedures repeatedly. Therefore, the drug delivery matrix is implanted in the human body where there is no need for a second surgery, which encourages the patients to pay more for better quality products. The segment is projected to grow at a CAGR of over 14% from 2016 to 2025.

North America dominated the global bioresorbable polymer market due to the high level of technological sophistication in the healthcare sector in the Canada and the U.S. The maximum share held by bioresorbable polymers in North America was due to its enhanced quality and improved resistance to weather, making it suitable for use in various applications in the medical industry. The regional market is anticipated to grow at a CAGR of 13.7% over the forecast period in terms of value.

The U.S. was the leading country in the North American region for bioresorbable polymer consumption because of considerable healthcare expenditure coupled with a rising population of individuals over 65 years of age. This, in turn, leads to an increase in the demand for bioresorbable polymers used in the drug delivery, orthopedics, and tissue engineering application.

Asia-Pacific is anticipated to be the fastest-growing market, in terms of both value and volume. Moreover the rising demand for polymers in the drug delivery and orthopedics applications coupled with the increased healthcare spending is projected to fuel the demand for the bioresorbable polymers in the region.

China emerged as the leading country in the Asia Pacific region to consume bioresorbable polymers in 2017. China launched the reformation program for the healthcare system improvement in 2009, intending to guarantee essential and equal medical services to all the population by 2020. According to the World Bank’s World Health Organization Global Health Expenditure database, China has witnessed an upward trend in healthcare expenditure since 2011, and its healthcare expenditure in 2017 was 5.07% of GDP. The increase in healthcare expenditure is attributed to the various reforms introduced by the Chinese government to improve healthcare facilities. Such initiatives can result in growth in the medical sector and thus positively impact bioresorbable polymers consumption over the forecast period.

Carbion and Evonik are the leading manufacturers of bioresorbable polymers and both the companies are highly involved in increasing their production capacities to match the demand scenario. Other prominent companies operating in the industry include Poly-Med, Inc., KLS Martin Group, and Foster Corporation. These enterprises are also undertaking various initiatives to gain a competitive edge, which is likely to drive investments and production capabilities over the forecast period.

This report forecasts revenue growth and provides an analysis of the latest trends in each of the sub-segments from 2014 to 2025. For the purpose of this report, Grand View Research has segmented the global bioresorbable polymers market on the basis of product, application, and region: