The global bitcoin market size was valued at USD 17.05 billion in 2021 and is expected to expand at a compound annual growth rate (CAGR) of 26.2% from 2022 to 2030. The growth is attributed to several advantages of Bitcoin such as cheaper and faster payments, less volatility, and also enables secure transactions. As a result, bitcoin can also be used as a store of value, other than as a medium of exchange for products and services across the globe. Moreover, with the emergence of Bitcoin, financial transactions no longer require central authorization and are settled immediately. 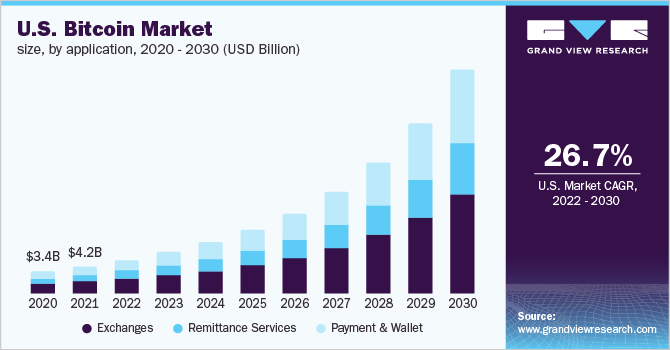 Aspiring investors and traders are searching for alternative ways to invest their money and Bitcoin has a major influence on them. The influence is attributed to the fact that currently, Bitcoin is the most dominant cryptocurrency and has a strong influence over other cryptocurrencies. Moreover, it is the first cryptocurrency that came into existence in January 2009, when the starting block was mined, known as the genesis block. In addition, many investors consider Bitcoin as a reserve currency for the cryptocurrency market owing to its pioneering status.

Moreover, Bitcoin’s rising popularity resulted in a proliferation of its clones. Litecoin is the first mainstream altcoin, it runs on the same code as Bitcoin. Litecoin aimed to become a faster and lighter version of Bitcoin. As a result, the market is fostered by other clones such as Bitcoin Diamond and Bitcoin Cash, and others. The majority of the altcoins values are aligned with Bitcoin’s movement, hence expanding the scope of Bitcoin.

Another factor contributing to the industry’s growth is that Bitcoin has the most secure network owing to the proof-of-work mechanism. It is corroborated by more than 18 million miners participating in blockchain, the decentralized network that underpins Bitcoin. The huge number of participants results in a high degree of network decentralization, providing the complete security of the Bitcoin payment system. Considering the security and other advantages, some regions such as El Salvador declared Bitcoin a legal tender in September 2021.

However, many people are still skeptical about Bitcoin owing to regulatory concerns which is a major market impediment. In addition, the lack of awareness among several developing countries such as India and China and remote areas is expected to obstruct the market’s growth. On the other hand, the growing utilization of the Bitcoin network and several development projects are expected to foster growth. For instance, in June 2020, the Human Rights Foundation (HRF) established the first Bitcoin development fund to enable Bitcoin users and others to make tax-efficient contributions to the development and contribute to the growth of the ecosystem.

The outbreak of the COVID-19 pandemic is expected to play a vital role in driving the growth of the Bitcoin market over the forecast period. Bitcoin and Ethereum are utilized as alternative investments and appeared to outperform other assets while dealing with the negative impacts of the Covid-19 pandemic on stock markets. Moreover, as Bitcoin is an independent cryptocurrency, the outbreak has a positive impact on its values. As a result, Bitcoin can be viewed as a relatively better hedge as compared to other cryptocurrencies.

The exchange segment dominated with a revenue share of more than 45.0% in 2021. The dominance is attributable to the huge volumes that are traded on exchanges as many traders and investors consider Bitcoin as a store of value. In addition, these exchanges are considered an alternative to stock exchanges owing to the similarities in operations and the exponential returns compared to the traditional exchanges. Moreover, the 24/7 accessibility and operability are expected to foster the segment’s growth.

The payment & wallet segment is anticipated to witness significant growth over the forecast period. Owing to the digitalization and the acceptance of contactless payments, there is a growing need for digital payment methods which is anticipated to drive the segment’s growth. In addition, the fees for Bitcoin transactions are often nil or as low as 1%. Moreover, the ease of transacting and immediacy of validating and settlement of the transactions are expected to drive the segment’s growth.

The BFSI segment held the largest revenue share of over 32.0% in 2021. An alternate world of commerce, banking, investment, and speculation is being created by the developing digital currency market. This universe has the potential to significantly alter the global economy and disrupt several industries. The market for cryptocurrency finance is expanding quickly and is entering the conventional financial sector. 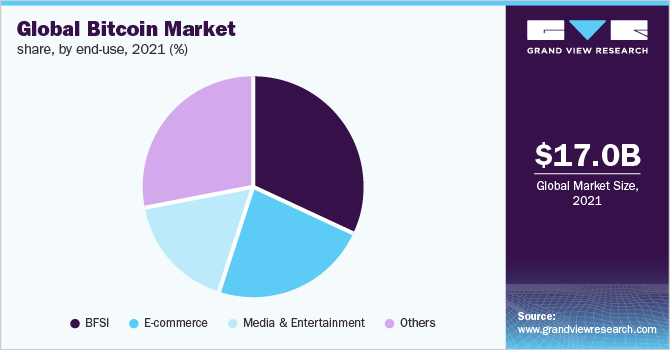 The e-commerce segment is anticipated to grow at a promising CAGR over the forecast period. The growing adoption of Bitcoin as a medium of exchange is expected to drive the segment’s growth. In addition, the integration of the Bitcoin payment option on e-commerce platforms owing to the secure proof-of-work mechanism of bitcoin that prevents fraudulent activities.

Moreover, Bitcoin payments allow customers to purchase the desired product anonymously via an encrypted wallet address, without risking their personal information. Thereby, such a combination of advantages is anticipated to increase the need for Bitcoin as an alternative to fiat currencies.

North America dominated with the largest revenue share of over 29.0% in 2021. The growing acceptance of digital payment solutions among people as well as businesses across the region is expected to drive the growth. The growing popularity of bitcoin mining and the presence of several prominent players also bodes well for the regional growth. For instance, in February 2021, Mastercard introduced the first Central Bank Digital Currency (CBDC) linked Card in the world in collaboration with Island Pay.

Asia Pacific is expected to grow at the highest CAGR over the forecast period. Growing consumerism, changing demographics, and acceptance of new technologies such as blockchain, and the Internet of things (IoT) among others present an attractive potential for Bitcoin in emerging countries such as Philippines and Vietnam. 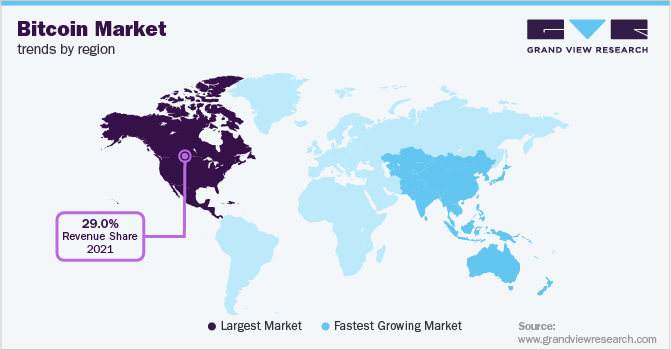 In addition, Bitcoin has already allowed a lot of people and businesses to grow and thrive by serving as their main source of revenue. Moreover, the growing adoption of Bitcoin and other cryptocurrencies has been observed in the region as the Central Bank of the Philippines approved 16 cryptocurrency exchanges so far.

The market can be characterized by the presence of several prominent players. Participants are pursuing various strategies, such as geographic expansion, strategic partnerships, and mergers & acquisitions, among others, to expand their footprint. For instance, in April 2022, Blockstream Corporation, Inc. and Block, Inc. formerly Square, Inc. are beginning work on a Bitcoin mine in Texas employing storage and solar technologies from Tesla. A solar PV array of 3.8 megawatts with a Tesla Megapack with a 12 megawatt-hour capacity will power the facility.

In another instance, the largest asset manager in the world, BlackRock, Inc., and Coinbase, Inc., a crypto exchange have partnered. The partnership aimed at enabling institutional users of its Aladdin platform access to Bitcoin through Coinbase Prime. Through the integration of the two platforms, institutional clients of BlackRock, Inc. will have access to Coinbase's trading, custody, reporting, and prime brokerage, services. Some prominent players in the Bitcoin market include:

The report forecasts revenue growth at global, regional, and country levels and provides an analysis of the latest industry trends in each of the sub-segments from 2017 to 2030. For this study, Grand View Research has segmented the global bitcoin market report based on application, end-use, and region: 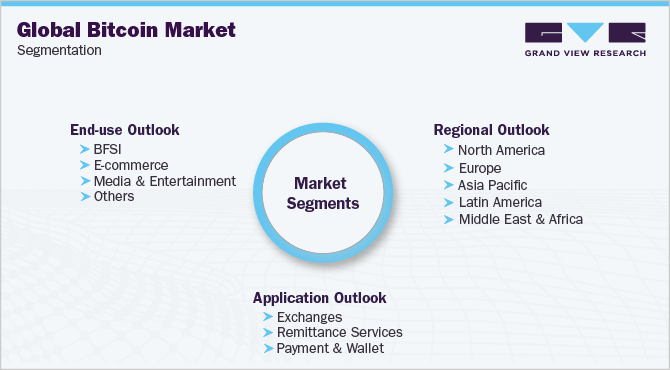 How big is the bitcoin market?

What is the bitcoin market growth?

Which segment accounted for the largest bitcoin market share?

b. North America dominated the bitcoin market with a share of 29.29% in 2021. The presence of several prominent players in the region stimulates market growth.

Who are the key players in the bitcoin market?

What are the factors driving the bitcoin market?

b. Key factors that are driving the bitcoin market growth include increasing number of bitcoin holders and rising acceptance of digital currencies.

Artificial Intelligence (AI), Virtual Reality (VR), and Augmented Reality (AR) solutions are anticipated to substantially contribute while responding to the COVID-19 pandemic and address continuously evolving challenges. The existing situation owing to the outbreak of the epidemic will inspire pharmaceutical vendors and healthcare establishments to improve their R&D investments in AI, acting as a core technology for enabling various initiatives. The insurance industry is expected to confront the pressure associated with cost-efficiency. Usage of AI can help in reducing operating costs, and at the same time, can increase customer satisfaction during the renewal process, claims, and other services. VR/AR can assist in e-learning, for which the demand will surge owing to the closure of many schools and universities. Further, VR/AR can also prove to be a valuable solution in providing remote assistance as it can support in avoiding unnecessary travel. The report will account for COVID-19 as a key market contributor.