The global bone grafts & substitutes market size was estimated at USD 2.58 billion in 2018 and is expected to witness a CAGR of 4.1% during the forecast period. Increasing number spinal fusion surgeries, target population, and adoption of allografts are key growth drivers for this market. 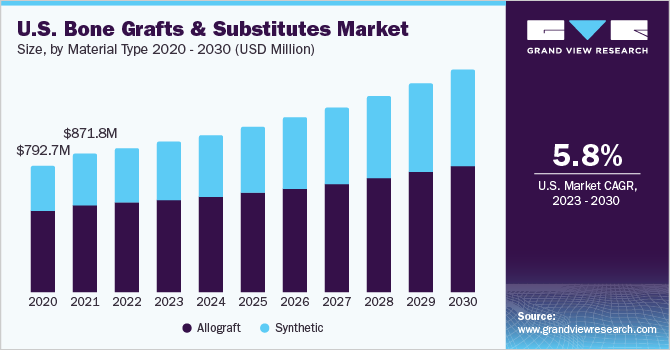 Bone grafts and substitutes are widely used in orthopedic surgeries for numerous applications. Rising cases of orthopedic problems caused due to weakened bones are projected to fuel demand. According to the Department of Economic and Social Affairs, United Nations, Population Division, the number of people aged over 60 was 841 million in 2013 and is expected to reach 2 billion in 2050. Thus, the number of orthopedic surgeries is expected to grow with rising geriatric population prone to orthopedic ailments. Thus, the market is anticipated to witness significant demand during the forecast period.

The increasing number of spinal fusion surgeries is further fueling the demand. According to the CDC report around 32% of the adult population and 60% of the elderly population affected by spinal deformities as of 2017. There were around 488,000 spinal procedures performed in the U.S. The common cause of spinal fusion injury found to be trauma, falls, collision or road traffic accidents. Moreover, increasing incidence of bone fractures is further increasing the rate of grafting procedures. According to the CDC, the worldwide incidence of hip fracture is expected to increase by over 240% in women and over 310% in men by 2050. Osteoporosis affected around 200 million women worldwide in 2018.

The increasing adoption of minimally invasive surgeries (MIS) is further increasing the demand for bone grafts & substitutes market. Surgeons are opting for MIS rather than open surgery owing to associated advantages such as minimal pain, reduced post-operative duration and less injury to the tissue. According to Minim Invasive Surg in 2018, minimally invasive techniques are being adopted for the treatment of a wide range of bone disorders. Approximately 400,000 spinal fusion cases are performed in the U.S. annually and it has turn out to be one of the most commonly performed and well-established treatment options for spine trauma, degenerative disorders, tumors, and structural abnormalities.

Rising market competitiveness favored by new product launch is anticipated to further propel growth in coming few years. For instance, in April 2018, AlloSource launched ProChondrix CR for articular cartilage repair in order to increase penetration. In September 2019, Kuros BioSciences launched MagnetOs which is expected to promote bone regeneration in spinal fusion and other orthopedic procedures. In October 2019, Medtronic received “Breakthrough Device designation” from U.S.FDA for its product Valiant TAAA Stent Graft System which is expected to increase the company’s footprint in the industry.

Based on product, the market is segmented into allograft & synthetic. The allografts segment includes demineralized bone matrix and others, whereas the synthetic segment is further broken down into ceramic, composite, polymers, and Bone Morphogenic Proteins (BMP). Allograft held the largest revenue share as of 2018.

The adoption of allografts over autografts is increasing rapidly owing to properties such as immediate structural support and osteoconductivity. Moreover, allografts do not require another surgery to harvest bone, which results in reduced surgery time and rapid wound healing. Thus, allografts are most commonly used in areas such as spine, hip, and knee. Thus, the market is expected to grow at a significant rate during the forecast period.

The synthetic segment is expected to show lucrative growth over the forecast period. The growth can be attributed to its better biocompatibility, lesser chance of disease transmission & better acceptance among patients over allografts. The ceramic synthetic segment dominated the market as of 2018. The ceramic segment is further subdivided into HAP, ß-TCP, α-TCP, bi-phasic calcium phosphates (BCP) & others. The ceramic graft material is easily reabsorbed by a patient’s body, keeping his own bone in place, and has a lesser risk of disease/infection transmission. Moreover, this segment is gaining popularity due to the shorter duration of surgery, reduced pain, and controlled blood loss involved in the procedure performed.

Major applications include craniomaxillofacial, dental, foot and ankle, joint reconstruction, long bone, and spinal fusion. Widening reimbursement coverage and the presence of a large geriatric patient population are some of the factors supporting the growth.

Spinal fusion accounts for the largest revenue share. Spinal fusion is used to correct defects in small bones (vertebrae) in the spine. According to the European Spine Journal in 2016, De novo degenerative lumbar scoliosis (DNDLS) is a spinal deformity in the elderly population that leads to disability and LBP/leg pain, spine trauma and disc degeneration, etc. To curb this problem, spine grafts are being adopted as a method of treatment of choice for these spinal deformities. Therefore increasing number of elderly population suffering from these spinal disorders and rising adoption of spinal grafting procedure as a treatment method is anticipated to escalate the revenue over the forecast period 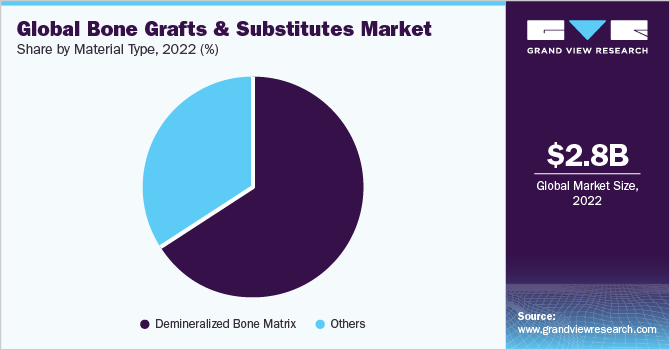 Increasing usage of grafts in dentistry is anticipated to provide dental application  segment with lucrative growth opportunities over the forecast period. The grafts are mostly used as a scaffold and filler to facilitate bone formation and promote healing. Rising adoption of dental implant surgical procedures with advanced surgical techniques such as bone grafts and bone regeneration is expected to facilitate market growth. Moreover, increasing success rates of dental implants are fueling the market. According to the American Dental Association report, around 95% to 98% success rate has been reported for dental implant surgeries as of 2017. Around 5 million implant procedures are performed in the U.S. every year.

North America captured the largest revenue share in 2018. Awareness regarding the commercially available products, higher healthcare expenditure 16.9% in 2018), and availability of advanced healthcare infrastructure are the major factors contributing toward its growth. The U.S., in particular, is leading the global market by generating the maximum product demand on account of the high prevalence of orthopedic diseases and trauma-related injuries.

Asia Pacific region is expected to show lucrative growth over the forecast period. The growth can be attributed to increased medical tourism and favorable government initiatives. On the contrary, stringent regulatory guidelines limit the adoption in some of the countries. In South Korea, the product should be approved by the Korean Food and Drug Administration (KFDA) before marketing. In case of Australia, the products are regulated by Therapeutic Goods Administration (TGA). The stringent regulatory scenario in Japan limits the entry of foreign players in the country. However, with the recent approval of DBM (Demineralized Bone Matrix) in Japan in 2019, the allograft market is poised to register lucrative growth in this region over coming few years.

The entry of new players especially in the synthetic segment is expected to boost the market growth with huge untapped opportunities. In February 2019, Medtronic launched Grafton DBM in Japan, which was the first-ever DBM in this country. This initiative is expected to increase the company’s regional penetration. Moreover, in April 2018, Medtronic received U.S. FDA approval for Infuse Bone Graft for spine surgeries. This approval is expected to increase the company’s penetration in spine surgery. In July 2018, NuVasive, Inc. launched AttraX scaffold bone graft, a ceramic-collagen bone graft to improve its product portfolio.

This report forecasts revenue growth at global, regional & country levels and provides an analysis of the industry trends in each of the sub-segments from 2014 to 2026. For the purpose of this study, Grand View Research has segmented the global bone grafts & substitutes market report on the basis of product, application, and region:

How big is the bone grafts and substitutes market?

What is the bone grafts and substitutes market growth?

Which segment accounted for the largest bone grafts and substitutes market share?

b. The Allograft material type segment dominated the bone grafts and substitutes market with a share of 57.97% in 2019. This is attributable properties such as immediate structural support and osteoconductivity. Moreover, allografts do not require another surgery to harvest bone, which results in reduced surgery time and rapid wound healing.

Who are the key players in bone grafts and substitutes market?

What are the factors driving the bone grafts and substitutes market?

b. Key factors that are driving the bone grafts and substitutes market growth include increasing number spinal fusion surgeries, target population, and adoption of allografts.