The global borage oil market size was valued at USD 33.91 million in 2015. It is expected to expand with a CAGR of 5.5% from 2016 to 2024. Increasing demand for bio-based cosmetics and nutraceuticals is expected to be a key driving factor for the market growth.

Earlier, the borage crop was considered to be only a Mediterranean region plant but now is cultivated in many countries for its seed oil with UK, Canada, and New Zealand being the major producers. The market fluctuates widely with some years of under-supply and some years of overproduction. Borage (starflower) oil is increasingly gaining importance on account of high gamma-linolenic acid (GLA) content. While many other plant oils such as black currant seed oil and evening primrose oil also contain GLA and offer similar health benefits, high GLA content than its counterparts give it an upper hand in the competition. GLA content in borage oil is around 20% to 25% while in black currant seed oil it is approximately 14% to 17% and in evening primrose oil it varies between 10% to 15%.

GLA is an omega-6 essential fatty acid that is required by the human body, but the human body is unable to produce the same on its own. Thus, the external supply of GLA is very much necessary. Direct or indirect supplementation of borage oil can be effective in treating and preventing health disorders related to fatty acid metabolism.

The major reason being high fluctuations in Canada, which is a major borage seed producer. Borage growers in Canada can grow good quality seeds at a lower cost due to favorable weather conditions in the country. However, high risk of crop failure exists due to unpredictable early frost in the region. Therefore, borage seed production in the country varies between 500 to 2000 tons per annum, and the prices fluctuate between USD 2.5 to 4 per kg. Such high fluctuations in the raw material supply along with price variations is expected to be the key factor restraining market growth.

It is also used in anti-inflammatory drugs & ointments along with nutraceutical applications where it is consumed directly or in combination with other base oils. Along with being the largest segment medical is expected to be the fastest-growing application, growing at an estimated CAGR of over 5% over the forecast period.

Due to its anti-inflammatory and antioxidant properties, it is widely used in cosmetic products which mainly include moisturizers, cleansers, anti-aging, skincare products, body care, and hair treatment. Increasing demand for skin-friendly cosmetics especially in the European market is anticipated to drive the product demand. As per the British journal of nutrition, borage oil-based cosmetic products have led to decrease in skin roughness also known as skin scaling. All these factors have contributed to propel the product demand in the cosmetic industry. Countries such as France, Germany, and the U.S. are major cosmetics producers. Rising demand coupled with awareness regarding natural ingredient-based cosmetics is expected to drive the market in these regions.

Asia Pacific borage oil market led the global industry and accounted for over 30% of global demand in 2015. Increasing production levels of nutraceuticals, pharmaceutical drugs, and cosmetics have been responsible for the huge demand in the Asia Pacific region. European and U.S. based cosmetic manufacturers have been struggling to increase their profit margins from the past few years. One of the key strategies applied by these manufacturers includes business process outsourcing. 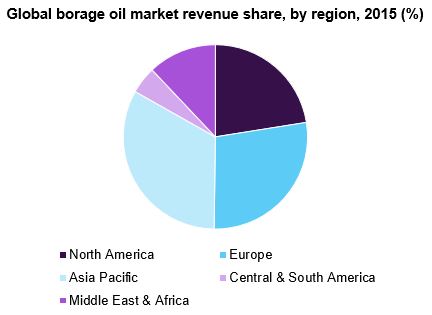 Europe is key borage producing region on account of its favorable weather and soil conditions. UK grown starflower is considered to be the best quality seed on account of its high oil and GLA content. Europe is expected to witness high starflower oil demand from cosmetic application owing to the presence of large skincare and haircare manufacturers including L’Oréal and Unilever. These companies are focusing more on bio-based cosmetic development which is ultimately expected to affect product demand.

In Central and South America, production is mainly influenced by weather conditions. The borage seed produced in this region has GLA content less than 20%, and hence the demand for borage seed from the region is low.

Southern Chile is expected to emerge as a major producer of borage as the climate in this region is similar to New Zealand. This region is considered to show promising growth during the forecast period as it is likely that major borage oil companies set up manufacturing units in this region. Medical and Cosmetic industries are anticipated to dominate the CSA market.

The market is fragmented in nature due to the presence of numerous small-scale manufacturers. Product quality depends on the GLA content and seeds obtained from the UK and Canada are considered to be the best quality. Manufacturers strive to obtain these good quality seeds to gain a competitive advantage as high-quality oil is preferred for premium applications.

How big is the borage oil market?

What is the borage oil market growth?

Which segment accounted for the largest borage oil market share?

b. Asia Pacific dominated the borage oil market with a share of 34.5% in 2019. This is attributable to numerous benefits including borage oil is a rich source of gamma linolenic acid (GLA) which is an omega-6 essential fatty acid (EFA) that aids in digestion

Who are the key players in borage oil market?

What are the factors driving the borage oil market?

b. Key factors that are driving the market growth include numerous benefits for health and skincare such as reduces rheumatoid arthritis aches and pains, relieves the discomforts of PMS, endometriosis, and fibrocystic breasts, clears up acne and rosacea, reduces the symptoms of eczema and psoriasis