The global breast reconstruction market size was valued at USD 2.2 billion in 2018 and is expected to expand at a CAGR of 6.9% over the forecast period. Increasing reconstruction procedures, prevalence of breast cancer, and introduction of technologically advanced products across the globe are anticipated to drive the growth. 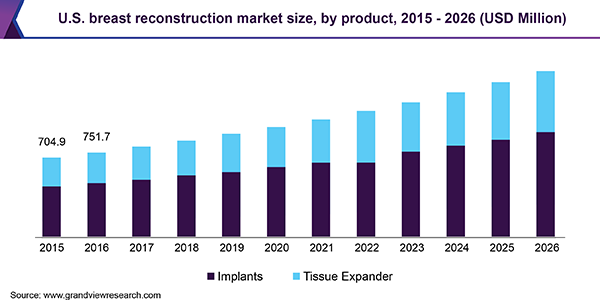 Growing awareness and concerns regarding physical appearance also are also anticipated to contribute to market growth. For instance, as per a study conducted by the National Center for Biotechnology Information (NCBI) in 2016, along with physical appearance, breast reconstruction after mastectomy also boosts women’s self-esteem and supports them psychologically. Thus, high demand for these surgical procedures has resulted in enhanced growth of these products.

As per the American Society of Plastic Surgeons in 2018, breast reconstruction is considered one of the top five cosmetic surgical procedures in the U.S. since 2006. Thus, the high number of these procedures has also resulted in increased demand for products associated with them, such as implants and tissue expanders.

Breast reconstruction surgery is mainly performed to restore the natural shape and appearance after lumpectomy, mastectomy, or any procedure used to correct congenital deformities. According to the data published in 2016 by the American Cancer Society, 61.0% of women with stage I or stage II breast cancer undergo lumpectomy or breast-conserving surgery, and around 36.0% of them opt for mastectomy. With the rise in number of mastectomy and lumpectomy, the volume of these surgeries has significantly increased, thereby supporting the market growth.

On the basis of product, the market is categorized into implants and tissue expanders. Based on type, implants are categorized into silicone and saline. In 2018, breast implants held the largest share in the breast reconstruction market. Implants are used for reconstruction procedures and to help restore the shape and appearance of the organ, following mastectomy or lumpectomy.

In addition, to improve physical appearance, people with congenital deformities also opt for reconstruction surgeries. Thus, these implant surgeries are widely adopted by people primarily in the developed regions with high disposable income and better access to well-equipped hospitals.

Silicone breast implants held the largest share in 2018 and is expected to witness the fastest growth over the forecast period. These implants have silicone outer shells filled with silicone gel. They are available in different sizes with either smooth or textured shells. Silicone implants are approved by the Food and Drug Administration (FDA) for breast reconstruction in women of any age. These implants are also used post mastectomy following breast cancer. Silicone implants are preferred by women mostly due to their appearance as natural breast tissue and soft texture. There is minimal risk of formation of hard scar tissue around the implant owing to the soft texture of silicone implants. These also pose minimum risk of any immune system-associated disorders.

Round shape segment market held the largest market share in 2018. Round breast implants and expanders are preferred by majority of the target population for routine reconstruction procedures in U.S. Soft and smooth shells are used for round implants, which minimizes visibility of implant ripples through the skin. Both silicone and saline implants are available for round shape.

Anatomical segment is expected to witness the fastest growth over the forecast period. Anatomical shaped breast products are natural-looking aesthetic devices, with flatters upper breast pole and a fuller lower breast curve. These products are popularly known as teardrop implants, due to their shape. Hence, they tend to provide greater projection as compared to round implants and expanders. Therefore, women who undergo natural-looking breast reconstruction opt for anatomical-shaped products. They reduce the risk of developing wrinkles due to stiffer gel used for them. They have a lower risk of resulting in capsular contracture as compared to the smooth implants.

On the basis of end-use, the market is assessed for hospitals, cosmetology clinics, and ambulatory surgical centers. Hospital segment held the largest market share in 2018. Increasing incidence of breast cancer and rising demand for these surgical procedures are the key factors driving the segment growth. For instance, as per the Breast Cancer Research Foundation (BCRF) in 2015, around 231,840 new cases of invasive breast cancer were diagnosed in women and around 2,350 in men in U.S. Furthermore, as per the Agency for Healthcare Research and Quality, the rate of women undergoing mastectomy procedures has increased by 36.0% during the period 2005 to 2013. Therefore, such instances are expected to propel the segment growth over the forecast period. 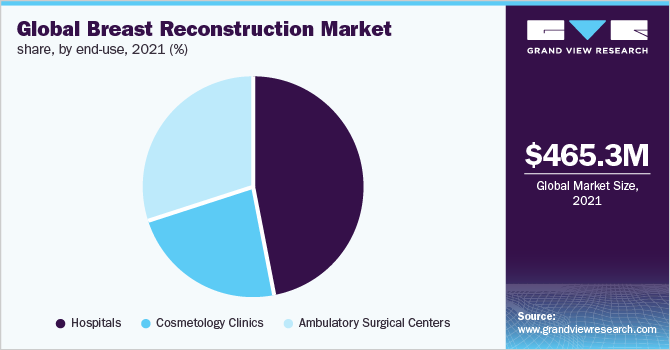 Cosmetology clinics is anticipated to witness the fastest growth over the forecast period. Rising consciousness regarding physical appearance coupled with increasing disposable income in developed and developing countries are expected to drive the growth. For instance, as per the American Society of Plastic Surgeons, in 2016, around 109,256 breast reconstruction procedures were performed and there is almost a 39.0% rise in procedural volumes from 2000 and around 3.0% rise from 2015. Thus, such cases are anticipated to surge the segment growth over the forecast period.

North America led the market in 2018 and is expected to witness a considerable CAGR over the forecast period. Increasing number of mastectomies due to rising incidence and prevalence of breast cancer is one of the major factors driving growth. In addition, the presence of highly developed healthcare infrastructure and growing healthcare spending are also expected to drive market growth over the forecast period.

Asia Pacific is anticipated to witness the fastest growth over the forecast period. Presence of emerging economies such as China, Japan, and India is anticipated to boost the regional growth. In addition, key players are making a constant effort to penetrate into the untapped areas of Asia Pacific, further driving the market growth.

For instance, in February 2016, Mentor announced the IDE FDA approval of its ATHENA clinical trial. The trial is developed to demonstrate and verify the effectiveness of the company’s Memory Gel Breast Implants. In September 2016, Mentor announced its collaboration with Galderma to provide its products to Canadian surgeons which are expected to help the expansion of the company in Canada.

This report forecasts revenue growth at global, regional, and country levels and provides an analysis of the latest industry trends and opportunities in each of the sub-segments from 2015 to 2026. For the purpose of this study, Grand View Research has segmented the global breast reconstruction market report on the basis of product, shape, end use and region:

How big is the breast reconstruction market?

b. The global breast reconstruction market size was estimated at USD 2.38 billion in 2019 and is expected to reach USD 2.54 billion in 2020.

What is the breast reconstruction market growth?

Which segment accounted for the largest breast reconstruction market share?

b. North America dominated the breast reconstruction market with a share of 43.8% in 2019. This is attributable to rising healthcare awareness and constant research and development initiatives.

Who are the key players in breast reconstruction market?

What are the factors driving the breast reconstruction market?

b. Key factors that are driving the market growth include rising number of breast reconstruction procedures, increasing incidence of breast cancer, and the introduction of technologically advanced products across the world.