The global building-integrated photovoltaics facade market size was valued at USD 818.2 million in 2018 and is expected to register a CAGR of 25.3% during the forecast period. The product is experiencing high demand, primarily from the developed economies that have a well-established electricity sharing system. The rise in government schemes and incentives regarding the use of BIPV as a renewable source of energy generation is expected to have a positive impact on growth.

Building-integrated photovoltaics (BIPV) are photovoltaic (PV) modules that are either combined with the buildings during their construction or are integrated later on with the outer surface replacing the old facade. Due to technological advancements, colored panels that have high aesthetic value are being implemented on the facade of the commercial buildings. 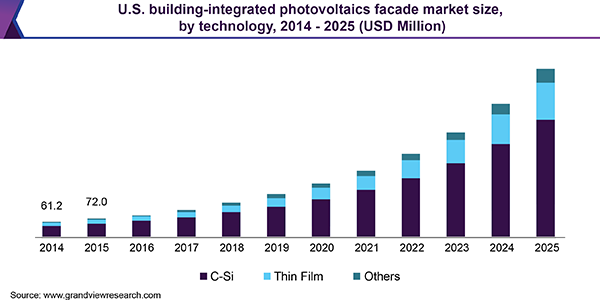 The U.S. market for BIPV façade was dominated by the Crystalline Silicon (C-Si) technology on account of the superior performance exhibited by these panels. Moreover, the growing concerns about the impact of non-renewable energy sources are likely to fuel the demand in the country.

The demand for integration of photovoltaics with facades is driven by their installation in the commercial sector. Increased emphasis on electricity sharing coupled with high subsidies provided by governments is anticipated to facilitate photovoltaic integration over the forecast period. Furthermore, BIPV in facades is driven by the improved aesthetic appeal and a large number of customized solutions offered by the market players.

Europe has witnessed significant involvement from the government for promoting the building-integrated photovoltaics (BIPV) facade. Stringent regulations and policies implemented by the regulatory bodies, such as the Europe 2020, Renewable Energy Directive 2, and National Renewable Energy Action Plan (NREAP) are anticipated to drive the regional demand in the forthcoming years.

The growth of the building and construction industry, primarily in the developing economies of Asia Pacific makes it favorable to integrate the BIPV facades during the construction of new buildings. Furthermore, the introduction of ventilated photovoltaic facades provides superior benefits such as greater yield in low irradiation and high-temperature conditions, reduction of acoustic pollution, elimination of thermal barriers, and superior insulation performance.

Rising concerns regarding environmental pollution caused by the use of non-renewable sources of energy are anticipated to drive the adoption of facade integrated photovoltaics over the forecast period. Furthermore, tax benefits and incentives offered by the European countries, such as France, Spain, and Germany promote the adoption of the BIPV facade in these countries.

Building-integrated photovoltaics installation is technology-intensive and requires significant knowledge of the installation process and customization possibilities. The use of BIPV installations for facade involves high cost due to the use of various components, such as inverters, meters, system monitors, combiner boxes, and wirings. These factors are expected to hinder the growth of the building-integrated photovoltaics facade (BIPV) market in near future.

Crystalline silicon technology dominated the BIPV facade market by capturing 71.9% share in 2018. The high strength of the C-Si BIPV facade coupled with superior resistance to adverse weather conditions were the major factors contributing to this dominance. The global market is expected to be primarily driven by the declining price of crystalline silicon cells, which in turn is expected to lower the installation cost over the next seven years.

Thin-film BIPV facade is expected to witness the fastest CAGR of 27.3% during the forecast period due to rapid technological advancements leading to the introduction of advanced products. Moreover, thin-film BIPV is readily used in case of considerable weight constraints for the building. 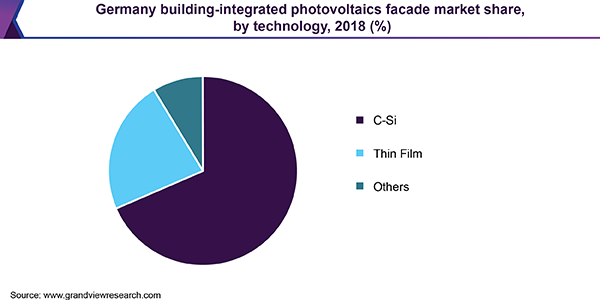 The demand for thin-film BIPV is expected to rise over the forecast period on account of superior product efficiency. However, the product has limited strength which may restrict its applications. The demand for organic photovoltaics is expected to increase over the next seven years on account of superior product flexibility. However, the high installation and maintenance costs are anticipated to restrain this growth.

Europe emerged as the largest regional market accounting for USD 285 million in 2018. The presence of high consumer awareness coupled with a favorable outlook toward renewable energy is likely to drive the growth. The governments of Germany and Italy emphasize on the use of solar energy, which is expected to translate into higher adoption of BIPV, thus promoting the regional market growth over the forecast period.

Europe has been at the forefront of promoting BIPV installations and formulating mandates necessary to ease their integrations. Policies, such as Renewable Energy Directive 2009/28/EC, National Renewable Energy Action Plan (NREAP), Solar Europe Initiative, and Energy Performance of Buildings Directive (EPBD) provide guidelines to the consumers for the integration of BIPV facades.

North America is expected to witness growth on account of the increasing adoption of integrated photovoltaics in industrial, commercial, and residential establishments. For instance, in August 2017, Carmanah Technologies Corporation received a contract to install the largest building-integrated photovoltaic system in Canada. The rise in such installations by major companies is projected to drive the regional market.

In the Asia Pacific, the governments of major economies, such as China, India, and other developing economies offer tax benefits for using solar energy-harnessing solutions to promote the demand for them. For instance, The Energy Conservation Promotion Act 1992 (ENCON Act) established the ENCON Fund in Thailand to provide subsidies and investment incentives to promote the installation of solar panels in the residential and commercial sectors.

AGC Inc.; Nippon Sheet Glass Co. Ltd; Solaria; and Heliatek are among the prominent players operating in the market. They focus on the development of BIPV products to cater to the applications in residential, public, and commercial spaces. In November 2017, Heliatek, along with its partner LafargeHalocim, announced that they have developed a unique photovoltaic energy-generating concrete facade.

Increasing investments and continuous R&D in BIPV products have led to the introduction of BIPV facades with enhanced efficiency and durability. For instance, In September 2017, AVANCIS announced the launch of a new CIGS-based architectural PV module PowerMax SKALA. The product is developed as an energy-producing alternative to the traditional facade system.

Emerging thin-film technology is anticipated to drive the demand for BIPV facades systems. This could be attributed to their better aesthetic value and low price. Also, continuous improvement in the efficiency of thin-film solar cells is expected to further boost the adoption in this solar energy industry. Heliatek, Hanergy, Polysolar, Kaneka, Flisom are some of the companies focusing on thin-film solar technology.

This report forecasts BIPV facade revenue growth at global and regional levels and provides an analysis of the industry trends in each of the sub-segments from 2014 to 2025. For this study, Grand View Research has segmented the global building-integrated photovoltaics facade market report based on technology and region: