The global bullet proof jackets market size was estimated at USD 1.20 billion in 2021 and is expected to expand at a compound annual growth rate (CAGR) of 5.7% from 2022 to 2030. Rising demand for lightweight body armor from end-use industries such as defense, law enforcement, and civilians is likely to drive industry expansion. The COVID-19 pandemic resulted in a global economic impact across all industry sectors in 2020. As a result, manufacturers of these jackets also experienced difficulties, resulting in a halt in production and sales. The lockdown and temporary suspension adversely impacted the manufacturing of bullet proof jackets. 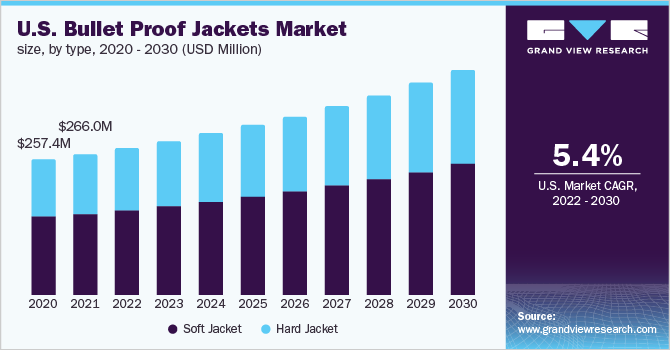 The growing awareness of commercial security in the U.S. is driving up demand for bullet proof jackets. Furthermore, as threats become more prevalent, worries about security in commercial areas such as retail security, healthcare security, and transportation security are growing rapidly. As a result, demand for this product is expected to rise over the predicted period.

Bullet proof jackets are specifically developed to shield the wearer from the effect of firearm rounds on human organs. The jacket lessens the impact of tiny explosive fragments and prevents projectile bullets from penetrating the wearer's body. It is made by stacking woven or laminated fibers with polythene plates, and metal or ceramic ballistic plates.

The global demand for this product is also fueled by the rising awareness of workplace safety. As threats increase, security concerns including those related to retail, healthcare, and transportation are intensifying quickly. The growing government expenditure on defense is another factor fueling the market for bullet proof jackets.

The soft jacket segment led the market and accounted for 56.9% of the global revenue share in 2021. Security personnel and soldiers are shielded from explosives, shotguns, and small-caliber handguns by the soft jacket, which is created from various layers of woven and laminated fibers. The soft jacket frequently has ballistic plates inside of them.

Metal plates can be used in conjunction with soft vests to add additional defense against guns and knife attacks. The bullet is bent by these vests' multiple layers of sturdy fibers, which spread the force of the impact over a larger area of the fiber and cause the bullet to develop into a dish-shaped shape.

Bulletproof jackets are made to spread the energy of the round and distort the slug to lessen blunt force harm. Strengthened steel plates are used to manufacture hard jackets of armor. Although these jackets are sturdy and practical, they are bulky and hefty. The heavy vests can also shield wearers from AK-47 bullets with a mild steel core. Over the forecast period, the demand for hard vest bullet proof jackets will be driven by the aforementioned factors.

High-risk tactical missions and hostage release missions are handled with hard vest bullet proof jackets. Unlike soft vests that are made up of multiple layers of fiber coating. Projectiles from shotguns and handguns are deflected away from the human body using these jackets. The hard jacket also shields its wearers from dangers greater than category IIIA.

In 2021, the defense segment accounted for the largest revenue share of 59.1%. This is a result of recent increases in global military might and high military spending. However, the growth in attacks, violence, and threats around the world is creating a greater need for civilian and military protection, which will also result in a greater uptake of bullet proof clothing in the defense sectors.

The enormous weight of the bullet proof jackets makes it difficult for military men to wear and move freely on the battlefield. As a result, firms and governments worldwide are investing in the development of new lightweight vests with increased mobility through the integration of advanced technologies such as 3D printing and the use of composite materials.

End-user revenue from security & law enforcement accounted for 26.8% of the global revenue share in 2021. Safety enforcement personnel are likely to boost demand for bullet proof jackets over the forecast period as they carry out their duties to ensure safety and security and to detect, prevent, and prosecute offenses.

In 2021, Level II protection accounted for 20.2% of the global revenue share. The level II body armor is suitable for council employees, officers, and even civilians. It provides enough protection to guarantee that someone can endure an assault without feeling burdened by the protection. 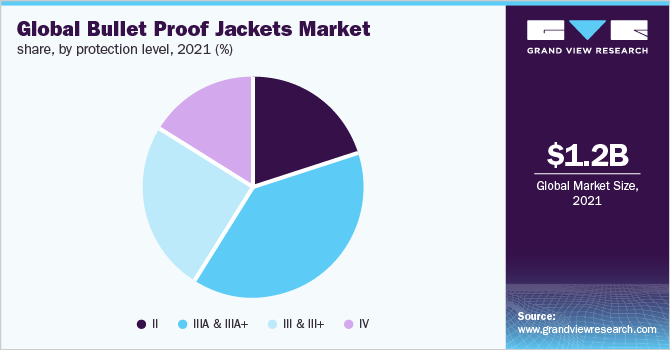 The most prevalent protection ratings in soft body armor are III and III+. This form of body armor protects against 9mm bullets moving at speeds of up to 1400 ft./s. Some manufacturers also offer IIIA+ body armor to protect against shotgun shells such as 9 mm civil defense rounds.

The level IV body armor offers protection from AP bullets of 30 calibers. This armor is made for use in military contexts and offers the maximum level of protection. In comparison to Level III & III+ body armor that is offered on the market, this gear is also pricey and bulky.

Europe accounted for 14.3% of the global revenue share in 2021, the bullet proof jackets market, and this is anticipated to continue over the forecast period. This is owing to government funding programs and better jacket manufacturing processes. These are the primary drivers of the European market. During the predicted period, developing regions are expected to grow progressively. This is because of a lack of funding programs and innovative technologies.

Key companies in Europe, including Engrade Body Armor, VestGuard UK Ltd., MARS Armor, and others, will drive the industry throughout the region. Increased spending on body armor procurement for military forces and law enforcement organizations is expected to drive market growth. 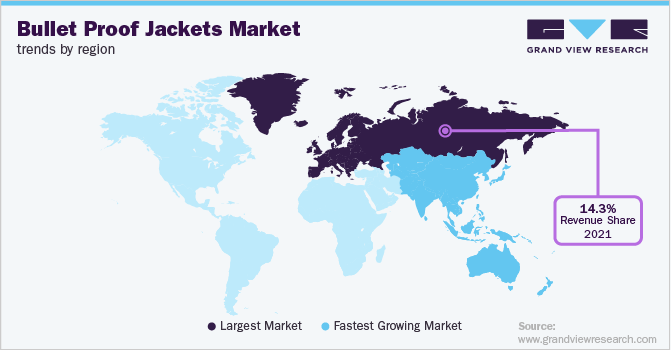 Asia Pacific held the highest share in 2021due to substantial active military and law enforcement agency personnel in countries such as China, India, and South Korea, it is likely to remain the highest spender on procurement of bulletproof ballistic protection items during the projection period. The increasing border tensions between several countries in the region, as well as the aging of existing bullet proof vests, are likely to drive market expansion.

According to the Army’s regulations, the bullet proof vest should be able to protect a soldier against 7.62 mm armor-piercing rifle ammunition and hard steel core bullets fired from a distance of 10 meters. In addition, there is a rise in defense research and development in the Asia-Pacific region to develop newer generation bullet proof vests. This is likely to drive product demand during the forecasted timeframe.

Manufacturers are concentrating on making vests that are lighter, more comfortable, long-lasting, and soft. OEMs also prioritize commercial expansion through mergers and acquisitions and alliances with military groups.

The lack of supply from Chinese raw material manufacturers has resulted in a significant demand-supply gap. Furthermore, raw material orders are expected to impede producers, as the logistics industry has been severely impacted by the Covid-19 issue lockdown. The industry’s dynamic has shifted as a result of decreased demand and delayed product deliveries. Some prominent players in the global bullet proof jackets market include:

This report forecasts revenue growth at global, regional, and country levels and provides an analysis of the latest industry trends in each of the sub-segments from 2017 to 2030. For this study, Grand View Research has segmented the global bullet proof jackets market report based on type, end-use, protection level, and region: 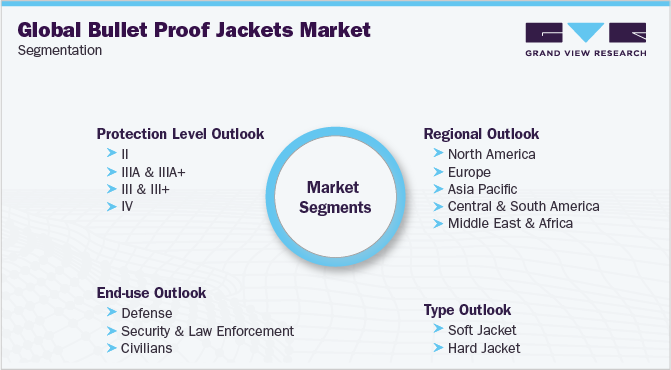 How big is the bullet proof jackets Market?

b. The Asia Pacific dominated the bullet proof jackets market with a revenue share of 37.0% in 2020. This is due to government funding programs, and advanced technologies for the production of jackets. The demand for military and civilian protection is rising, however, as a result of the rising violence and threats around the world. This will also result in an increase in the use of bulletproof jackets in the defense sector.

Who are the key players in the bullet proof jackets Market?

What are the key factors driving the bullet proof jackets Market?

The shortage in supply of raw materials from Chinese manufacturers resulted in a severe demand-supply gap. The manufacturers are further expected to be stranded on raw material orders owing to the logistics industry being significantly impacted due to lockdown amid COVID-19. However, the producers are expected to move away from China aiming to reduce the future risks that would affect the business and to reduce the manufacturers' cluster in a single country in order to smoothen the supply chain. The report will account for COVID-19 as a key market contributor.