The global canned meat market size was valued at USD 13.68 billion in 2020 and is anticipated to expand at a compound annual growth rate (CAGR) of 2.2% from 2021 to 2028. Increasing preference for processed food and rising per capita spending on meat consumption are expected to fuel the product demand over the forecast period. The COVID-19 pandemic had an adverse impact on the market. The sudden slowdown of frozen food imports has been one of the major changes over the lockdown period. For instance, cumulative import of frozen tuna in the U.S. in the first quarter of 2020 accounted for approximately 8% than the first quarter of 2019. In the U.S., poultry meat emerged as the largest meat type segment for canned meat in 2020. 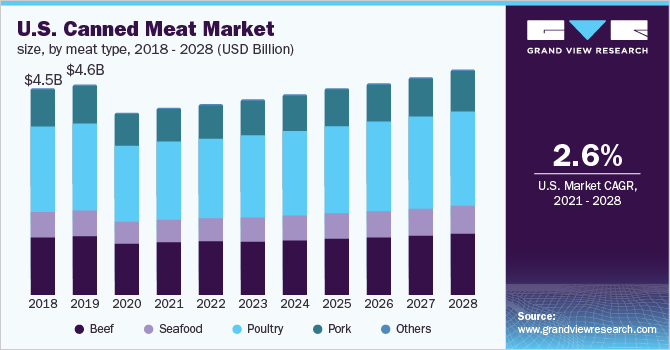 Rising consumption of poultry meat is expected to drive the segment growth in the U.S. Overall poultry meat consumption in the U.S. accounted for 18,733.6 thousand tons in 2019 and reached 19,169.0 thousand tons in 2020.Canned food has a longer span off the shelf, as sterilized food is isolated from the external environment by sealed containers, such as glass & metal cansand aluminum foil. Hence, food is not debased with outside air or microorganisms. The sealing ability influences the shelf life of canned foods. Meat, poultry, and fish are the major types of processed food, witnessing higher demand across the world.

The dynamic and fast lifestyle of consumers credited to the rapid urbanization is expected to stimulate the product demand further. The young generation as well as the working-class population demand not only ready-to-eat food, but also nutrients and a unique taste. Manufacturers are launching new products with high nutrients and a variety of tastes, which can provide traction for consumers from different regions. For instance, in February 2020, Bordon launched two new kinds of corned meat, such as spicy and onion, alongside chunky.

The poultry segment led the market and accounted for more than 41% share of the global revenue in 2020. Steadily increasing consumption of poultry meat is expected to fuel the demand for canned poultry meat during the forecast period. In 2020, the global chicken meat production accounted for 100,026 thousand metric tons, compared to 92,726 thousand metric tons in 2018. China ranked as the highest poultry meat consuming market with 20 million tons consumption, followed by the U.S. with 19 million tons in 2019.

The seafood segment is likely to expand at the fastest CAGR over the forecast period. The growing demand for processed seafood from developing countries is expected to drive the segment growth. For instance, the processing levels of seafood in India are currently at 23%, which represents significant potential for seafood processing players. The increasing per capita seafood consumption is further expected to stimulate the demand for canned seafood. For instance, per capita seafood consumption in China increased from 25.4 kgs in 2004 to 35.9 kgs in 2020. 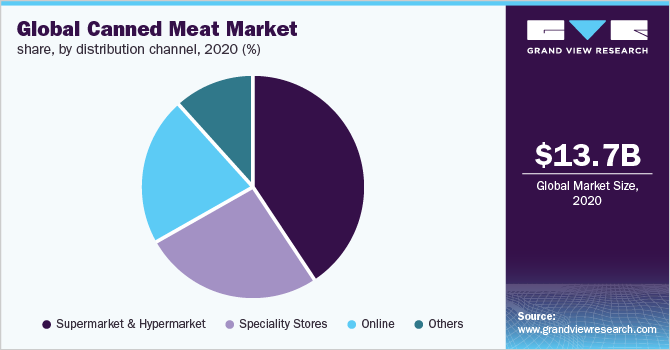 Moreover, rapid growth in e-commerce, owing to wider distribution networks and product availability, generates significant opportunities for market players in the market and has influenced manufacturers to sell their products through online distribution channels. The COVID-19 pandemic has resulted in the online distribution channel becoming one of the most important distribution networks among manufacturers, distributors, retailers, and customers. Companies are implementing policies and harnessing digital technologies to provide consumers with enhanced shopping experiences.

North America emerged as the largest regional market in 2020 and accounted for over 32% of the overall revenue share. The U.S. is one of the key countries in North America that has advanced significantly over the last few years when it comes to the food processing sector. The processed food industry in the U.S. is a major contributor to the global economy. Changing lifestyles and tastes of consumers along with demographic growth are driving the food processing industry in the U.S., thereby stimulating the demand for canned meat.

Asia Pacific is expected to be the fastest-growing regional market over the forecast period. The rapidly expanding food sector in countries, such as China, India, Japan, Indonesia, Vietnam, and Bangladesh, has resulted in the advancement in the food processing sector, thereby boosting the product demand in the region. The production of canned poultry meat in Japan accounted for 8.10 million kgs in 2019, increasing from 7.70 million kgs in 2016. Similarly, in 2019, canned pork and canned beef meat accounted for production of 6.00 million kgs and 3.30 million kgs respectively, in Japan.

The market includes a combination of a few established players and several start-ups. Players face intense competition from each other as some of them are among the top manufacturers and have a large customer base for their products in both regional and international markets. Moreover, these market players have strong and vast distribution networks, which help them reach a wider customer base.

The market is both growing and transitioning toward the concept of sustainability as it offers a major opportunity for brands to capture sales from increasingly health-conscious consumers. Established companies have been altering their production methods of canned meat processing to align themselves with the changing trends. Some of the key players operating in the global canned meat market include:

This report forecasts revenue growth at the global, regional, and country levels and provides an analysis of the latest industry trends in each of the sub-segments from 2016to 2028. For the purpose of this study, Grand View Research has segmented the global canned meat market report on the basis of meat type, distribution channel, and region:

How big is the canned meat market?

What is the canned meat market growth?

Which segment accounted for the largest canned meat market share?

b. North America dominated the canned meat market with a share of 28.9% in 2020. The U.S. is one of the key countries in North America when it comes to processing food to make it ready to eat. The U.S. has advanced significantly over the last few years concerning food processing.

Who are the key players in the canned meat market?

What are the factors driving the canned meat market?

b. Increasing preference for processed food and rising per capita spending on meat consumption are expected to fuel the demand for canned meat over the forecast period.