The global capillary blood collection devices market size was valued at USD 1.15 billion in 2017. It is projected to expand at a CAGR of 5.4% during the forecast period. Rising availability of PoC diagnostics, increasing prevalence of chronic diseases, and various advantages of the product over its alternatives are some of the primary growth stimulants for the market.

Chronic diseases are a global healthcare problem with over half of the adult population in the U.S. suffering from chronic diseases, which contribute to over 75.0% of the total healthcare cost in the nation. Thus, a rising number of infectious and chronic diseases is creating a significant demand for diagnostic testing, thereby propelling the market. 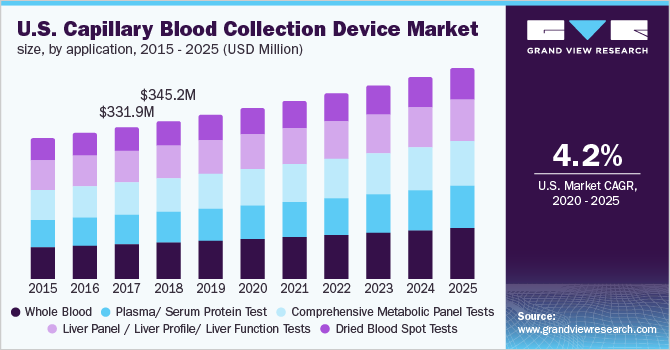 There has been a tremendous rise in the number of infectious and noncommunicable diseases over the past few decades. Rapid urbanization, borderline poverty in the majority of developing regions, antimicrobial resistance, and rising prevalence of foodborne diseases are some of the factors leading to their increased prevalence. These factors are anticipated to stimulate the growth of the market during the forecast period. According to the World Health Organization, noncommunicable diseases such as chronic respiratory disorders, cardiovascular disorders, cancer, and diabetes contributed to 71.0% of the total deaths in 2017.

PoC diagnostics has witnessed tremendous growth in the recent past owing to the introduction of technologies such as bioanalytical platforms, biosensors, novel assay formats, and other complementary research techniques. Development of novel molecular diagnostics has facilitated rapid diagnosis at lower costs and at greater convenience. Capillary blood facilitates collection devices that enable rapid hematology tests with the aid of PoC diagnostics. In comparison to venous and arterial blood collection, this form of sample collection is less invasive, inexpensive, and does not require a trained professional for blood draw procedure.

This technique, in conjugation with PoC diagnostics, has become the preferred mode of testing in remote and ambulatory health settings. Anemia is one of the most common nutritional deficiencies among adult women. This procedure is preferred over venous and arterial blood procedures as they require a small number of blood samples. Owing to their advantage, they are used for various hematology tests in pediatric and adult populations alike. Thus, with the rising adoption of rapid PoC diagnostics, the usage of capillary blood collection devices is estimated to increase in the near future.

Lancets were the most prominent product type in the market in 2017, owing to their frequent usage in blood draw procedures. This segment is poised to maintain its dominance through 2025 owing to the incessant need of lancets in these procedures. They comprise a small scalpel to make punctures in the skin in order to obtain a blood sample. With the rising incidence of infectious and chronic diseases, the demand for lancets has been increasing steadily.

These are typically seen in two variations - disposable and reusable. Disposable lancets are generally used in clinics and hospital settings wherein a large number of patients are tested for infectious and chronic diseases. Reusable lancet devices are mostly used in the home-care settings for routine glucose and hemoglobin analysis in diabetic and anemic patients, respectively.

Micro-container tubes are also projected to hold a considerable share in the market during the forecast period. They are specifically designed collection tubes for capillary blood collection. These tubes are available in a variety of forms such as serum-separating, EDTA, heparin, and plasma separation tubes. These additive coated tubes are used in accordance with hematology procedures and are also color-coded. Typically, these are available in microliters as capillary blood draws only test small amounts of blood. Plastic and glass are the most commonly used raw materials for manufacturing micro-container tubes.

By application, the capillary blood collection devices market has been segmented into whole blood tests, plasma/serum protein tests, comprehensive metabolite panel (CMP), liver panel tests, and dried blood spot tests. Whole blood tests were the most prominent application segment in the market in 2017 owing to their high frequency and ability to detect a wide range of diseases. Dried blood spot tests are anticipated to witness considerable growth during the forecast period owing to their use in the diagnosis of HIV, hepatitis infections, and other diseases.

Complete blood count tests are the most commonly performed blood tests. These tests are typically used for the determination of white blood cells (WBCs), red blood cells (RBCs), hematocrit, hemoglobin, and platelet counts. These tests provide clinicians with sufficient data to detect anomalies and ensure an accurate diagnosis. They are also used in monitoring certain diseases such as diabetes and anemia. The global rise in infectious and chronic diseases, such as cancer, anemia, autoimmune diseases, and diabetes, has increased the demand for hematology tests, especially whole blood tests.

CMP includes a series of blood tests that analyze the body’s metabolism and energy consumption. These tests are typically performed annually based on a patient’s age or disease condition. The panel comprises tests that provide information about the status of a person’s metabolism including electrolyte and acid/base balance and levels of glucose and proteins, and health of kidneys and liver. It includes tests such as electrolytes, kidney tests, and liver tests. These tests are routinely performed in patients suffering from diabetes and other chronic diseases such as cancer and autoimmune diseases.

On the basis of end use, the market has been divided into hospitals and clinics, blood donation centers, diagnostic centers, home diagnosis, and pathology laboratories. Hospitals and clinics were the leading revenue contributor in the market in 2017 owing to frequent diagnostic testing and large inflow of patients. Home care diagnosis is estimated to register the highest CAGR during the forecast period owing to the introduction of novel devices that facilitate the easy and effective diagnosis of diabetic and anemic patients.

According to the Centers for Disease Control and Prevention, 125.7 million outpatient department visits were recorded in the U.S. With an increasing number of surgical procedures, such as angioplasty and kidney & liver transplants, and rising incidence of trauma, the requirement for blood transfusion has increased significantly in hospitals.

Mostly, blood donation centers operate as individual centers. However, some hospitals and clinics may have such centers. After collection, blood is processed and tested for any disease-causing factors and ultimately separated into its components, depending on the need. Increasing R&D expenditure by leading players to support the development and launch of new products and devices is also expected to supplement the growth of the segment.

Pathological, radiological, and other clinical tests are conducted in diagnostic centers. With the growing occurrence of endemic and pandemic diseases, the number of blood tests being conducted in diagnostic centers is also increasing. According to WHO, the incidence of tropical diseases such as dengue, chikungunya, malaria, and yellow fever has increased significantly, thereby fueling the demand for these devices. As these centers cater specifically to diagnostic needs, they have significant demand for these devices.

In 2017, plastic accounted for the largest revenue segment in the market due to its high adoption, ease of usage & disposal, and cost-effective nature. The glass segment is likely to exhibit a lucrative CAGR during the same period owing to its predominant usage in the medical devices industry and stability during hematology procedures.

Plastic devices are commonly used in various collection products as they are lightweight, cost-effective, and biocompatible with the human body. Over the past few decades, plastic is increasingly being used for the manufacture of medical devices. Safety, chemical stability, transparency & clarity, flexibility, and durability are some of the major factors contributing to its increasing adoption in healthcare settings globally. This segment is expected to maintain its dominance throughout the forecast horizon. 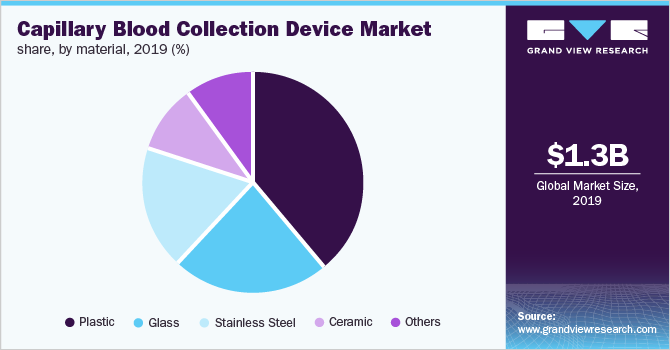 In comparison to plastic, glass products can be easily recycled, thereby improving environmental sustainability. Thus, an increasing number of manufacturers are engaged in the production of glass-based products and devices. Glass also has a high resistance to heat and thus, is preferred over other raw materials for the manufacturing of medical devices. Stability, accuracy, and resistance to antimicrobial growth are some of the major reasons for the high adoption of these products.

Ceramic is used in the manufacturing of capillaries, connectors, adapters, and other related accessories. Some of the merits of the material are lightweight, high resistance to heat, temperature, and superior electrical insulation. The mechanical strength of these materials is one of the key factors responsible for its usage in the medical field. Its expensive nature and high cost of manufacturing are, however, limiting the growth of the ceramic segment during the forecast period.

North America dominated the market in 2017. Well-developed healthcare infrastructure and the presence of leading clinical diagnostics companies in North America have driven the market in the region. Moreover, the rising adoption of advanced technologies and increased focus on clinical research in this region are likely to augur well for the market. An increasing number of surgical procedures, mounting cases of accidents & trauma cases, and the rising prevalence of noncommunicable & infectious diseases are also poised to stoke the growth of the regional market.

Europe accounted for the second-highest revenue share in the market in 2017. It is projected to expand at a CAGR of 4.9% during the forecast period. The healthcare system in the region is publicly funded and some countries have adopted universal health care systems. Widening base of patients suffering from noncommunicable diseases and the presence of key market players have been propelling the regional market.

Sarstedt AG & Co. have a large product portfolio of capillary blood collection devices. Some of the products in this company are Microvette 500 Z; Minivette POCT 200µl; Micro Tube 1ml hem. reag. /20µl; and Safety-Lancet Mini 28G. However, the lack of new product development by key players is projected to impede market growth. Other players in the market have a limited number of products, which is expected to result in limited choices for key buyers, such as hospitals and clinics.

In addition, mergers, acquisitions, and strategic agreements are some of the initiatives undertaken by key players to stay ahead in the global arena. For instance, in 2017, Greiner Bio-One announced the acquisition of Vacuette España and Vacuette Portugal. Both companies are anticipated to further strengthen the commercial distribution network of Greiner’s blood collection products in Spain and Portugal, respectively.

This report forecasts revenue growth at global, regional, and country levels and provides an analysis of the industry trends in each of the sub-segments from 2014 to 2025. For the purpose of this study, Grand View Research has segmented the global capillary blood collection devices market report on the basis of material, product, application, end use, and region: