The global carbon fiber reinforced plastic market size was valued at USD 14.5 billion in 2017 and is estimated to witness significant growth over the forecast period. Increasing demand for carbon fiber reinforced plastic (CFRP) from the automotive and aerospace industries, growing need for fuel-efficient vehicles, and government regulations to curb vehicular pollution are expected to drive the market.

Rise in demand for lightweight vehicles is projected to propel market growth in the coming years. Numerous government organizations, coupled with the favorable regulatory framework, facilitated the manufacturers to invest and enhance the research and development capabilities, quality, and automation in the process. 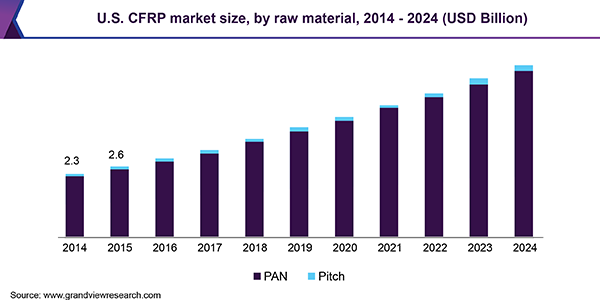 The most commonly used raw material for CFRP production is polyacrylonitrile (PAN). CFRP properties depend on the precursor of carbon fiber used for its production. PAN has superior properties than pitch. It is projected to gain traction in the forecast period owing to its increasing application and demand as compared to pitch-based CFRP.

Demand for PAN has witnessed substantial growth as compared to pitch. Rise in the production of propylene has driven the demand for polyacrylonitrile. Extensive R&D activities by market players are anticipated to drive the CFRP market demand. Market players in U.S. including Hexcel Corporation and Solvay S.A., along with major end users such as Boeing Co., are expected to propel the market growth in the coming years.

The market is majorly ruled by numerous standards, regulations, and policies. The industry safety standards are the major targets for the value chain participants and they are bound to follow these regulations and standards, which structures the CFRP market globally.

On the basis of raw material, the global market is segmented as PAN-based CFRP and pitch-based CFRP. Polyacrylonitrile is the most commonly used raw material for CFRP production. It was the leading raw material in 2017, accounting for a 96.4% share of the total volume. The properties of CFRP including high tensile strength depend on the precursor used for its production. The market is majorly dominated by PAN based carbon fiber reinforced plastic, which is anticipated to witness significant growth in the coming years.

However, raw material prices play a crucial role in CFRP cost component. The production is an energy-intensive process that requires a large amount of energy, which further adds up to the final product cost. Lower raw material conversion rate is also responsible for higher CFRP prices.

Thermosetting CFRP was the leading product segment in 2017, accounting for 76.2% share of the total volume. The segment is expected to witness a decline in the coming years on account of increasing demand for thermoplastic CFRP from the automotive and aerospace industries, owing to its superior properties of stability and strength over thermosetting.

Through research and development activities, companies are developing various manufacturing techniques that can produce thermoplastic CFRP with properties similar or superior to thermosetting CFRP, which is anticipated to drive the thermoplastic segment over the forecast period.

Aerospace and defense was the leading application segment in 2017, accounting for 31.1% share of the total volume. The segment is expected to witness significant growth on account of increasing demand for lightweight and fuel-efficient aircraft. Technological developments in carbon fiber reinforced plastic can help reduce the high cost of aerospace grade CFRP as compared to other grades in the market.

Carbon fiber reinforced plastic is popularly used in military planes and helicopters owing to its ability to reduce the weight of an object. Reduction in weight is considered important in order to increase fuel efficiency and overall performance of these flying machines. Moreover, growing commercial aviation sector and growing concerns over aircraft weight are expected to spur the product demand in the aviation industry. 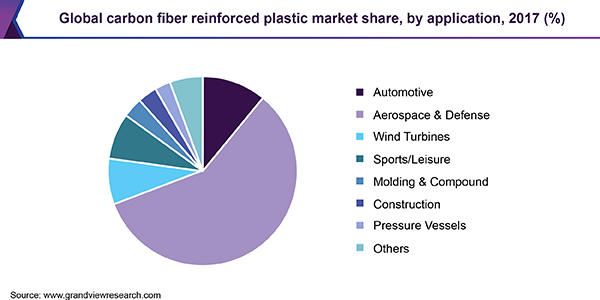 Moreover, rise in demand from the automotive industry is projected to fuel global CFRP demand over the forecast period. Increasing demand for fuel-efficient vehicles and stringent government regulations regarding the air pollution are expected to further drive the carbon fiber reinforced plastic market. However, creation of waste is a key issue associated with CFRP manufacturing. Numerous regulatory bodies have imposed regulations, including Solid Waste Laws and Regulations, regarding waste dumping and treatment of poisonous gases, which govern the overall industry.

North America dominated the market and accounted for 36.9% share of the total volume in 2017. Growth of the automotive and aerospace and defense industries in the U.S., along with stringent government regulations regarding automotive pollution, is expected to drive the regional market. Technological advancements and government regulations on energy efficient and environmentally friendly products are expected to drive product demand in this region.

Europe emerged as the second largest regional market in 2017 and accounted for 35.2% share of the total volume. Presence of key aircraft and automotive manufacturers in the region has fueled the product demand in Europe. Governments of the U.S. and Japan have been jointly supporting CFRP development activities in both the regions as carbon fiber reinforced plastic is the most preferred solution for automotive weight reduction.

The market is dominated by global multinational companies. It is majorly concentrated in developed regions including North America and Europe. Key manufacturers occupy a majority of the global market share. Asia Pacific provides potential opportunities for extensive business growth. Pricing and other strategic initiatives depend on the top players.

The carbon fiber reinforced plastic industry is highly characterized by technological innovations. Prominent market participants have developed their own CFRP manufacturing technology. Europe and U.S. based manufacturers have been using borrowed technology. However, these companies have also been working on developing their own production technology.

Every manufacturer focuses on in-house precursor production. SABIC, a major player in the petrochemical industry, has recently ventured into CFRP development. Increased usage of carbon fiber reinforced plastic is expected to create a large amount of waste in the absence of recycling. Manufacturers in association with national governments have been investing in R&D for developing CFRP-effective recycling technology.