The global castor oil & derivatives market size was valued at USD 1.21 billion in 2021 and is expected to expand at a compound annual growth rate (CAGR) of 5.8% from 2022 to 2030. The demand is anticipated to be driven by increased consumption of the product in biodiesel feedstock. Liquid biofuels are used as substitute fuels for different types of combustion engines working on kerosene, diesel, and gasoline as well as in passenger vehicles including airplanes, ships, and trucks. Biodiesel, a liquid biofuel, is extracted from animal fats or vegetable oils and is either used in diesel engines or blended with diesel oil. Castor oil is used as a bio-based raw material for the production of biodiesel since it is non-edible and has a distinctive chemical structure. 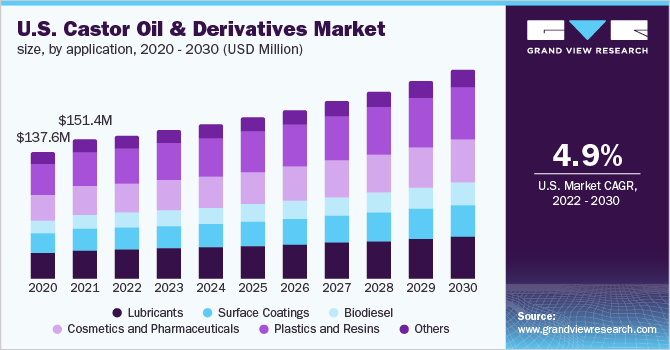 Castor oil is anticipated to witness a high demand over the forecast period from cosmetics and pharmaceutical sectors due to increasing healthcare expenditure and growing awareness among individuals regarding self-management and preventive care resulting in growing consumption of cosmetics and pharmaceutical products. The demand for the product is also anticipated to surge owing to its rising utilization in the production of skincare products, cosmetics, and soaps.

The product has excellent anti-inflammatory effects that help in reducing swelling and pain and promote the healing of wounds. In addition, since castor oil works as a natural laxative, it aids in the movement of the muscle that thrusts solid through the intestines and helps clear the bowels.

Rising utilization of the product to reduce the symptoms of constipation, lower the feelings of incomplete bowel movements, and ensure less strain during defecation is anticipated to drive the industry’s growth. The growth of the pharmaceutical sector in various economies of North America, Europe, and Asia Pacific is projected to fuel the demand for the product.

The product is used in the formulation of creams, soaps, perfumes, shampoos, lipsticks, lip gels, deodorants, hair oils, sunscreens, lubricants, and other cosmetics. The rising consumption of castor oil in cosmetic products as it serves non-comedogenic cosmetics is anticipated to drive its demand. Ascending demand for skincare products in Germany, Italy, France, Spain, and the U.K. owing to the increased utilization of makeup by working women is anticipated to promote the growth of the cosmetics industry.

A rise in demand for moisturizers, and creams owing to an increase in consumer awareness along with rising disposable income is anticipated to boost the growth of the cosmetics market and consequently the demand for castor oil & derivatives. Changing lifestyles and widespread consciousness regarding grooming the overall personality of an individual across developing countries including India, China, Malaysia, and Sri Lanka are projected to drive the global cosmetics market.

Major cosmetics manufacturers are investing in R&D activities and are implementing new product branding and other advertising strategies to accelerate their sales across the globe. Innovative strategies including new product launches and packaging designs have been adopted by manufacturing companies to increase the sales of cosmetic products. The growth of the cosmetics market is expected to stimulate the demand for the product in the near future.

Global Castor Oil & Derivatives market was negatively impacted due to COVID-19 for the short term due to the shutdown of manufacturing/refining facilities and logistic disruptions. India is one of the largest producers of the product and accounts for more than 85% of global product exports. In 2020, the global product market was significantly hampered on account of its high reliance on Indian castor oil exports.

Sebacic acid product held the dominant revenue share of 38.6% in 2021. The higher share is attributed owing to the growing inclusion of sebacic acid during manufacturing polyamide and resins. Increasing demand for sebacic acid in the production of plastics, biopolymers, and aromatic products is anticipated to drive the growth of the product market as well as castor oil production in the Asia Pacific region, especially China.

Ricinoleic Acid is anticipated to witness the highest CAGR of 6.5% over the forecast period. The growth is expected due to an increase in demand in various end-use application such as making soaps, coating inks, and textile finishing. Ricinoleic acid is reacted with bases such as ammonia, caustic, and ethanolamines to produce soaps. The product is used in industrial lubricants, metalworking compounds & emulsifiers, and cutting oils. It is used to prepare high-solid liquid as well as transparent bar soaps.

It enables the homogenization of cresylic and phenolic ingredients in heavy-duty detergents, disinfectants, and industrial germicides. In addition, ricinoleic acid is a dye dispersant and an efficient pigment, which finds its application in coatings, inks, cosmetics, and plastics among others. All these factors are further anticipated to drive the market growth.

Hydrogenated castor oils are manufactured by using a controlled heat process, where the melting point is increased to transform castor oil into a waxy-like structure. This process enhances the texture and stability of the product and is heat controlled to prevent the formation of trans-fats. Castor wax is used in multipurpose industrial greases and metal drawing lubricants. It is used in greases as a substitute for products such as sodium, traditional soap thickeners, calcium, and potassium, which is anticipated to boost growth.

Plastics and resins application held the largest revenue share of more than 20% in 2021. The demand is attributed due to the increase in the adoption of biodegradable plastics. The product is highly utilized as raw material for plastics manufacturing in comparison to crude oil. Additionally, it is also used as a substitute for recycled plastics in the textile industry.

Castor oil-based resins such as castor oil-modified epoxy and polyamide resin offer outstanding properties such as elevated temperature performance, toughness, flexibility, rigidity, chemical resistance, strong adhesive, and formulation latitude. Consequently, castor oil has evolved as an active ingredient in epoxy and polyamide resin formulations. Its modified resins find extensive application in the paints & coatings industry. It is also useful as a plasticizer in protective coatings. Drying oil is one of the recognized uses of the product as a raw material for decorative and protective coatings. 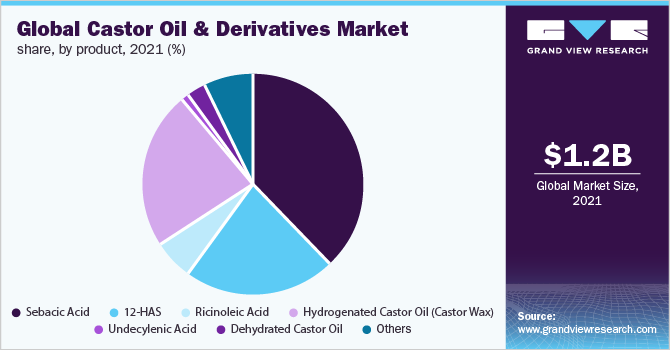 The cosmetics and pharmaceutical segment is anticipated to witness the highest CAGR of 6.1% over the forecast period. The growth can be witnessed owing to an increase in demand for personal care and cosmetic products which includes soaps, deodorants, body lotions, and skincare products.

The product is used as an additive or excipient in drugs to develop stable emulsions of nonpolar components in several aqueous systems. In addition, it is used as a drug delivery medium for nonpolar drugs including anticancer drugs—docetaxel and paclitaxel. Innovations in the pharmaceutical sector concerning the inclusion of castor oil in novel medicines are anticipated to drive the market.

Asia Pacific held the largest revenue share of more than 55% in 2021. The demand is attributed due to an increase in consumption and production of the product. Castor seeds are grown in the tropical regions of India, Myanmar, Vietnam, Pakistan, Cambodia, Thailand, Bangladesh, Philippines, and Indonesia and the semi-arid regions of China, Japan, and South Korea.

Although castor seeds were traditionally grown in the wilds of Asia Pacific, in the last decade, many countries in the region have started making serious efforts to grow castor seeds on a commercial scale. Apart from seeds, castor leaves, stems, and roots are also of significant importance. In China, castor leaves are used to raise silkworms. The stems of castor plants are used to make paper and medium-density boards while their roots are used as natural medicines. 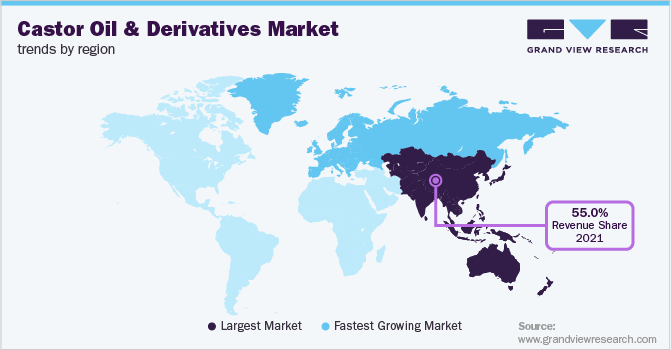 Europe is expected to grow at a CAGR of 6.8% over the forecast period. Europe is the second-largest consumer of castor oil and majorly imports from countries such as India, Brazil, Malaysia Mexico, and China for its domestic needs. France, the Netherlands, Germany, Belgium, Italy, and the U.K. were the top importing countries.

North America emerged as one of the significant consumers of the product owing to the increased consumption of bio-based plastics, lubricants, diesel, and cosmetics in the region. Demand for the biogenic constituent in automotive, textile, packaging, paint, and construction industries is witnessing growth in the region. In addition, increasing demand for castor-based supplements to encourage healthy growth of hair and skin is expected to drive the growth of the industry.

The global market is highly competitive with the big international brands focusing on the development of a long-term relationship with the end-users. Increasing demand for castor oil has led to increased competition. Companies such as Jayant Agro Organics Limited, N.K. Proteins Pvt. Limited, and Thai Castor Oil Industries Co., Ltd., and have a high degree of integration across the value chain as they are also engaged in the production of castor oil. These companies have established themselves as key manufacturers and focus on research and development for novel uses of the product. Some prominent participants in the global castor oil & derivatives market include:

This report forecasts revenue growth at global, regional, and country levels and provides an analysis of the latest industry trends in each of the sub-segments from 2018 to 2030. For this study, Grand View Research has segmented the global castor oil & derivatives market report based on product, application, and region: 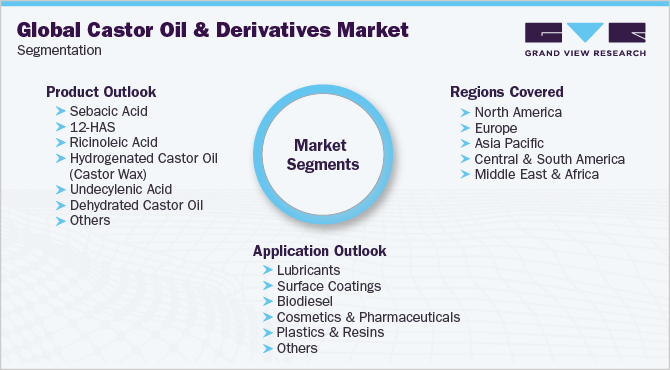 How big is the castor oil and derivatives market?

What is the castor oil and derivatives market growth?

Which segment accounted for the largest castor oil and derivatives market share?

b. Sebacic acid dominated the castor oil and derivatives market with a share of 37.6% in 2021. This is attributable to rising demand from lubricants, polymers (nylon production), cosmetics, and solvents.

Who are the key players in castor oil and derivatives market?

What are the factors driving the castor oil and derivatives market?

India accounts for ~80% in the castor oil production, China and Europe being the major importers for castor oil. While the export to China has eased to some extent with recovery in the early Q2, European demand continues to fall. Lockdown measures are slated to severely impact the short term economic prospects of castor oil. Moreover, sebacic acid, a key derivative of castor oil, of which ~90% is produced in China has also witnessed a drastic drop in production due to the COVID-19 pandemic. We expect the market demand to grow post Q3 of 2020 when the impact of the pandemic in China and India resides and economic activities get back to normal. The updated report will account for COVID-19 as a key market contributor.