The global sebacic acid market size was valued at USD 245.6 million in 2017. It is projected to expand further at a CAGR of 3.7% over the forecast period. Growing demand for biodegradable polymers due to their eco-friendly nature is expected to drive the global market. The demand for sebacic acid is also supported by favorable government regulations across the globe.

It is mainly derived from castor oil and is classified as a second-generation derivative. It accounts for a market share of about 27% in the gen II castor oil derivatives market. It is majorly used in the manufacturing of biodegradable plastics, and nylon 6.10, which have major applications in textiles, automotive, and packaging industries. 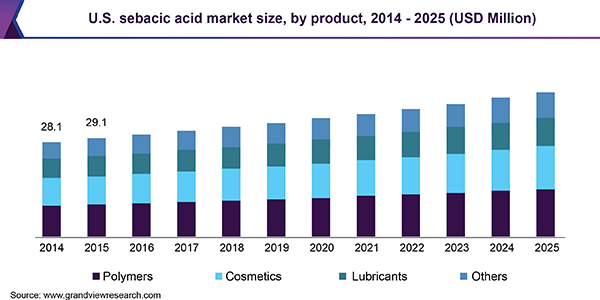 The U.S. market for the chemical is majorly driven by its use as a precursor to polymers and lubricants and growing demand in cosmetic products. Increasing population coupled with growing awareness about personal health and skin care products is augmenting the demand for good quality cosmetics. This, in turn, is boosting the market growth. Moreover, wide usage in several end-use industries, such as lubricants, paints, and adhesives, and polymers, is contributing to the product demand.

Emerging economies, such as China, India, Japan, and Brazil, are investing heavily in chemical production to fulfill the growing demand. This chemical is classified as non-toxic and non-hazardous substance by the ECHA and REACH and hence also provides easy, as well as affordable, trade between different regions. Growing urban population, majorly in China and India, has led to a rise in demand for cosmetic products. Governments in these regions have undertaken several initiatives to develop green chemicals that provide a faster yield of castor seeds.

Sebacic acid cost is heavily dependent on castor oil, the key raw material. However, the prices have increased from 2017 owing to the sudden rise in demand for castor seeds. Stringent rules and regulations along with high energy and logistics costs are expected to further fuel the price inflation. Key companies in the market, such as DuPont and BASF, are focusing on their R&D activities to introduce new manufacturing methods for recycling and reusing of sebacic acid polymers to maintain the demand-supply balance.

Sebacic acid has the maximum demand from the cosmetics industry as it finds applications in various formulations. It is a prominent ingredient in different products wherein it is used as a pH adjuster, firm filming agent, and fragrance enhancer. The rising popularity of social media is also boosting the growth of the cosmetics sector. Moreover, increased awareness about personal care products, especially in emerging regions, is likely to spur the segment growth.

Currently, the polymer manufacturing application segment accounts for the highest market share. The chemical is an integral component in the manufacturing of biodegradable plastics. The plastic ban in developing countries has also been regarded as a boon to the manufacturers of biodegradable polymers. The others segment includes paints and coatings and metalworking fluids. The product is used as a precursor in lubricants and paints owing to its oxidizing corrosion inhibition and filming properties. 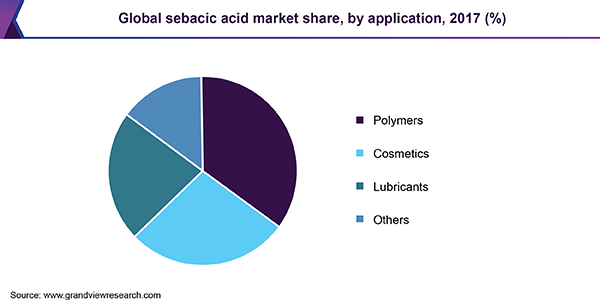 These properties have augmented the demand for it in major industries, such as automotive, aerospace, and construction. Increasing automobile production has boosted the market for paints and lubricants, in turn, driving the sebacic acid demand. Rapid urbanization, as well as industrialization, in the developing countries of Asia Pacific, have led to a rise in demand for metalworking chemicals containing sebacic acid.

Asia Pacific is the largest as well as the fastest-growing regional market. The region’s expansion can be attributed to rapid industrialization and urbanization, burgeoning population, and strong economic growth. Increasing public and private investments in infrastructure development in emerging economies, such as China and India. This has led to the origination of various domestic brands as major competition to multinational cosmetics manufacturers. Furthermore, the robust growth of polymer manufacturing in China and Southeast Asia is contributing to the region’s expansion.

The primary factor driving demand in North America is the broad product scope and extensive usage in end-use industries, such as automobiles, textiles, and cosmetics industries. Original Equipment Manufacturers (OEM’s) in the region are focusing on upgrading vehicles by providing additional coatings to the base paint. Sebacic acid is an important ingredient for these paints and coatings as it acts as a filming ingredient due to its excellent temperature resistance properties.

Major companies are majorly focusing on the development of new technologies to manufacture sebacic acid from new sources such as butadiene and adipic acid. Competitive factors that have a deep impact on the market growth include feedstock supply, pricing, and manufacturing technology. Collaborations with raw material suppliers and end-users will help industry participants to gain significant market share over the forecast period.

This report forecasts revenue and volume growth at global, regional, and country levels and provides an analysis of the latest industry trends in each of the sub-segments from 2014 to 2025. For the purpose of this study, Grand View Research has segmented the global sebacic acid market report on the basis of application and region: