The global chilled & deli foods market size was estimated at USD 178.47 billion in 2017. It is expected to expand at a CAGR of 5.2% over the forecast period. A shift in the global economic, social, and demographic trends is likely to exert pressure on food supply, thereby creating new challenges for food manufacturers and end consumers. These changes are poised to significantly reshape the context of frozen food and consumer perceptions of the category going forward.

With the increasing global population and rising income levels across emerging markets, the demand for food and other resources will grow at an unprecedented level, thereby, significantly affecting the availability of resources and market prices. Considering the rapidly changing environment across developing countries such as China and India, there is slated to be a high demand for meat and dairy products in raw or frozen form. This, on the other hand, is also projected to challenge resources, with prime focus on curbing waste from an environmental perspective. 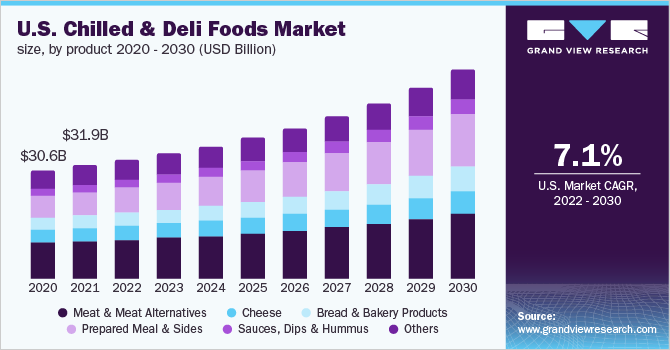 As more of several people enter the global workforce and adapt to changing lifestyles, retail stores are likelier to alter the present state of display and focus on products that have a high shelf life and capable of retaining qualities while kept frozen. In emerging regions such as Latin America, Southeast Asia, and Eastern Europe, relatively buoyant income growth is rendering the middle-class population more eager to experience new goods and services.

Rising preference of consumers for chilled & deli products along with consumer focus in gaining knowledge & desire to understand various nutritional contents is one of the key trends driving the market. In several markets, trends related to convenience are being counterbalanced by a desire to ‘reconnect’ with food consumed, from understanding origin and provenance, to cooking more from scratch. Greater health consciousness, resulting from increased prevalence of lifestyle-related diseases, will persist to influence choices taken by consumers and manufacturers for different types of foods and ingredients used.

Uncertainty in costs of deli food production in light of the high level of capital spending as well as fluctuation in raw material prices is estimated to affect profit margins. The market is dominated by companies having tie-ups with regional producers and retailers. Increasing the use of e-commerce portals for selling deli foods by local manufacturers across emerging markets is expected to impel market players to adopt new strategies. However, the retail segment is likely to gain prominence over the forecast period. Establishment of business units in the vicinity of buyers can ensure smooth product supply and keep customer engagement in the market.

Busy lifestyle coupled with shifting consumer preference towards ready-to-eat meals, owing to convenience offered by them, is poised to remain one of the key trends stoking market growth over the forecast period. Retail outlets are engaged in maintaining a chilled meat inventory, which helps in catering to spiraling demand for fast food and ensure availability of the same for a longer duration.

However, industry participants which are largely unorganized, particularly in Asian countries, face significant challenges regarding prices and quality of products as compared to large multinational corporations. High-maintenance and logistics costs, considering the transportation and storage of products at cryogenic temperatures, are projected to act as a stumbling stone for market participants over the forecast period.

Meat, savory appetizers, prepared salads, pre-packaged products, and sauces, condiments & dressings are some of the key product types for chilled & deli foods. In 2017, sauces, condiments & dressings accounted for USD 28.23 billion. The segment is anticipated to witness a CAGR of 5.3% over the forecast period. Increasing demand for authentic cuisines across the globe is one of the primary factors stirring up the consumption of sauces. Shifting consumer preference to devour flavor in foods & snacks is estimated to prompt manufacturers to offer products that are appealing, high-quality, and reliable such that they can maintain consistent standards globally.

The meat segment is expected to post a CAGR of 5.1% during the forecast period. Besides manufacturing traditional meat products, developing and producing products with fresh and innovative qualities and ingredients is of vital importance to meet the diverse requirements of customers. Processed meat manufacturers are coming up with new products and are also adding new flavors to the existing range of products.

Millennials play an important role in the growth of the global processed meat market. In 2017, the millennial population in the U.S. was estimated to be about 75.9 million, which was about 23.3% of the country’s total population. Fast-paced lives of individuals in developed and developing countries are leading to a preferential shift among the working class from conventional meat to processed meat products covering the requirements of chilled & deli foods.

The prepared salad segment is projected to witness a CAGR of 5.0% during the forecast period. Growing inclination and adoption of vegetarianism has been contributing to the growth of the segment. Prepared salads constitute an important part of a healthy diet and their consumption daily aids in preventing certain types of cancer and cardiovascular diseases. Although, inadequate intake of salads may lead to ailments such as gastrointestinal cancer and ischemic heart diseases.

Pre-packaged products dominated the global chilled and deli foods market in 2017, accounting for over 22.0% of the overall revenue. Changing lifestyles, rapid urbanization, rising GDP, increasing disposable income, and growing middle-class populations in emerging economies such as India and China are further anticipated to spur the growth of the segment over the forecast period. Despite the presence of significant growth opportunities, the market is facing challenges as several nutritionists consider pre-packaged sandwiches to be unhealthy because of high salt and sugar content as well as the use of genetically modified sweeteners in them. Other challenges include the threat of substitutes, preference for home-cooked sandwiches, and intense competition among existing vendors.

North America was the leading revenue contributor in the global arena and was valued at USD 52.65 billion in 2017. Rising consumption for convenient sources of food products that can be consumed on-the-go has been supporting the dominance of the region. Several individuals supplement their regular meals with chilled and deli products, such as prepackaged sandwiches and prepared salads, while some time-pressed consumers substitute their regular meals with the same. Thus, changing consumer lifestyles, especially in terms of eating habits, and rising need for convenience food are estimated to augment the sales of chilled and deli food products in the region.

Asia Pacific is expected to register a CAGR of nearly 5.8% during the forecast period. Sales of chilled & deli foods are growing with the expansion of modern food retailers in emerging economies, wherein companies are increasingly investing in cold chain infrastructure for fresh, chilled, and deli products. The market is mainly driven by the need for convenience food products that need less preparation or consumption time. Food retail chains are significantly boosting the demand for savory appetizers. 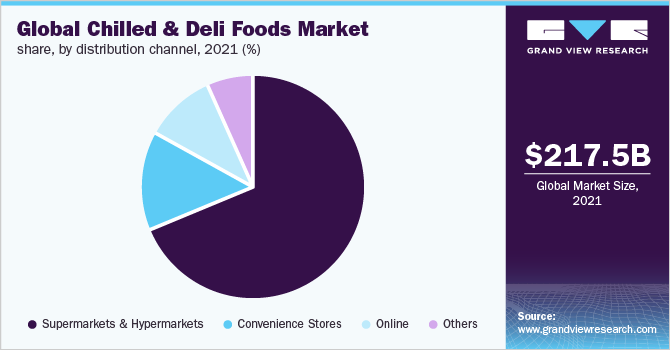 Surging demand for ethnic foods in the region is fueling the demand for exquisite chilled and deli products. Consumers are gradually becoming interested in new flavors, which is likely to proliferate new product offerings in the savory appetizer segment. Widening bases of health-conscious individuals preferring healthy products, such as prepared salads, is poised to escalate the growth of the region. Most of the newly launched products have no preservatives, are organic, or offer specific health benefits. Marginal prices, ease of use, and availability of convenience packs are boosting the demand for chilled and deli food products.

Europe is projected to reach USD 72.60 billion by 2025. Rising preference for a vegan diet among flexitarian individuals in countries such as Germany, U.K., and Spain is anticipated to bolster the demand for chilled and deli foods such as prepared salads and prepackaged sandwiches. The burgeoning popularity of these products is prompting players to reformulate their products to gain more revenue share. The U.K. and Germany are the top markets for chilled and deli food products in Europe. Market players in the region are increasingly investing in brand awareness campaigns.

The market holds immense potential for international as well as regional players. Emerging entrants, especially in developing countries, are expected to gain increased opportunities to enter the market. Rising establishment of government initiatives and increasing foreign investments in developing the food & beverage sector, mainly in China and India, are expected to boost industry growth over the coming years.

Overall, the global market is highly competitive and dependent on technological advancements along with product development. Industry players strive to achieve the local taste and gain a competitive advantage over others. The presence of local players poses a significant threat to large multinational companies in terms of product quality and price offered to customers.

This report forecasts revenue growth at global, regional, and country levels and provides an analysis of industry trends in each of the sub-segments from 2014 to 2025. For this study, Grand View Research has segmented the global chilled & deli foods market report based on product and region: