The global conductive ink market size was estimated at USD 3.17 billion in 2016 and is expected to register a CAGR of 4.1% over the forecast period. Applications such as consumer electronics coupled with the need for cleaner energy have surged the demand, and the industry is expected to grow over the forecast period. It is likely to replace bulky circuits and energy consuming wires in the coming years.

Rising concerns regarding high carbon dioxide emissions have threatened the government agencies to shift towards low carbon alternatives. This, in turn, has resulted in increased investment opportunities for solar photovoltaic systems, which, is anticipated to augment the overall product demand over the forecast period. 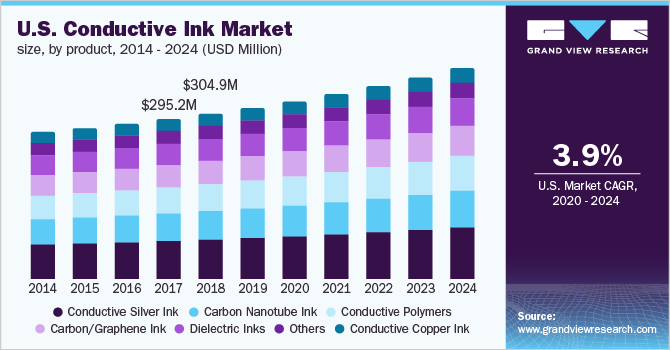 Conductive silver ink is widely used in various applications owing to its high thermal conductivity and printability. However, manufacturers are finding alternatives for silver due to its high cost and scarcity. As a result, copper, which is inexpensive & exhibits high electrical conductivity, has been identified as a good alternative to silver.

Some of the conductive inks contain polymeric conduction compounds. These inks, when compared with traditional standards such as etching copper and copperplate substrates, provide an economical means to set up modern conductive traces. The major factor driving the market is the surging demand for efficient and miniaturized consumer electronics.

The product can be used as a substitute for traditional wire circuits due to properties such as smaller size, better energy efficiency, and better durability. Furthermore, these products offer better durability, reliability, and energy efficiency in portable devices. Conductive ink also finds applications in fuel cells and batteries, which in turn is expected to increase the demand over the projected period.

Research initiatives are being undertaken to develop cheaper raw material types, such as carbon and graphene, which comprise almost similar properties such as silver. Both company manufacturers and the government are planning to unlock potential applications associated with conductive inks. This factor is further anticipated to aid the global market over the forecast period.

Conductive silver ink accounted for over 22% of the global revenue in 2016 as it is widely used due to its excellent conductivity, durability, thermal stability, and reliability. Although silver-based inks have experienced a fluctuation in prices in the recent past, manufacturers are opting for the production of products containing minimal silver formulations.

Carbon or graphene base provides the conductive ink with added flexibility and performance. Carbon-based inks are increasingly being used in the fabrication of nanomaterials. Owing to their low cost and customizable rheology, they are widely used in complex devices such as touch screens and sensors. Furthermore, they are majorly used in contact pad manufacturing find its usage in remote controls, mobile phones, and printed circuit boards.

The dielectric ink segment is projected to witness significant growth over the forecast period on account of the increasing use of dielectric inks in injection-molded electronics (IME). IME has various applications in integrating flexible circuits and electronic parts in three-dimensional products. Furthermore, these circuit boards are used in electronic items such as washing machines, automotive consoles, and steering wheels.

The conductive polymers segment is anticipated to witness growth at a CAGR of 3.6% in terms of volume owing to its increasing application in screen printing. However, screen printing is one of the oldest printing technologies, which is witnessing a rapid decline in usage and is likely to become outdated in the coming years, thereby impacting the segment growth negatively.

Conductive inks are used in the fabrication of photovoltaic textiles. The rising prominence of clean energy is likely to push the growth of the photovoltaic segment over the forecast period. The increasing electrical demand is expected to be the key propellant of solar plants globally. Countries such as China, India, and the U.S. are projected to generate robust demand for the photovoltaic segment.

Conductive ink is widely used in the automotive industry and accounts for approximately 15.3% of the total market revenue in 2016. In the recent past, the growth rate for this application segment has been almost constant. Innovation in areas such as rear windows and windshields containing conductive ink traces are presumed to lead the market growth for the automotive application segment, which, in turn, would aid the market demand. 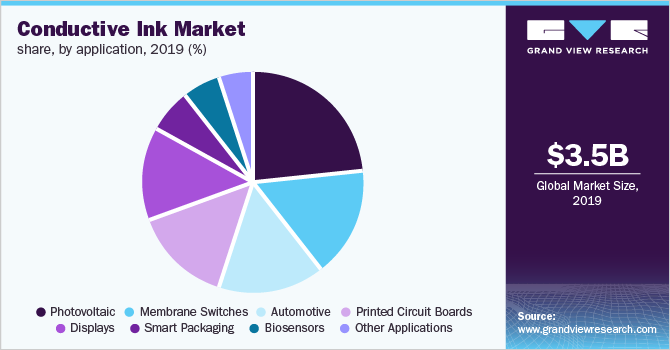 Conductive inks also find their usage in smart packaging applications, which provide protection from counterfeits, determine shelf life, and track the details of importers and exporters. The popularity of smart packaging often referred to as active or intelligent packaging, has increased in the pharmaceutical and food product industry, which, in turn, is expected to propel the growth of the conductive ink market in the FMCG sector.

The Asia Pacific conductive ink market led the global industry and accounted for over 54% of total market revenue in 2016. Emerging countries such as China and India accounted for a large share of the overall conductive ink market. Investments taken in China and India to set up solar photovoltaics have taken a surge in the conductive inks market as they are considered to emit enormous solar energy. This, in turn, is anticipated to be an opportunity for the replacement of nonrenewable energy.

Macroeconomic factors in the Asia Pacific, such as the expanding middle class, rising disposable incomes, education, changing demographics, and rapid urbanization are driving the conductive ink market in the region. The demand for conductive inks in consumer electronics is high in the region. The increasing presence of key players in the Asia Pacific is also estimated to boost the overall growth of the market.

The U.S. is the second-largest producer of automobiles in the world, which has resulted in high demand for conductive inks from the country. The large market size, high disposable incomes, mass-production ability, and high product variation of the country have boosted the market growth in the U.S. The presence of major global players and their manufacturing hubs in the country has also contributed to the growth of the conductive ink market.

Packaging, transportation, labeling, plastic parts, and reusable containers (for laboratory equipment and loudspeakers) constitute the established industrial sectors in Germany. The growth of the key end-use industries of conductive inks due to the favorable atmosphere for industrialization in the country and the rapid rise in the demand for them is estimated to contribute to the market's overall growth over the forecast period.

The global conductive ink market is fragmented in nature with many global as well as regional companies participating and accounting for a major part of the overall market. Key manufacturers in the market include Vorbeck Materials Corporation; Sun Chemical Corporation; Creative Materials Inc.; Nova Centrix; Engineered Conductive Materials; Heraeus; and Fujikura.

Companies such as DuPont; Conductive Compounds Inc.; PPG Industries; Poly-Ink; Henkel AG; and Voxel8 are forward integrated across the value chain as the companies are involved in the product manufacturing as well the distribution for use in various applications. Applications such as photovoltaics are expected to drive market growth over the forecast period as they are a renewable sources of energy.