The global connected living room market size was valued at USD 38.02 billion in 2018 and is anticipated to expand at a CAGR of 8.6% over the forecast period. The proliferation of connected devices, such as smart televisions, smart speakers, gaming consoles, and set-top boxes, among others, particularly among households, is expected to drive the growth. 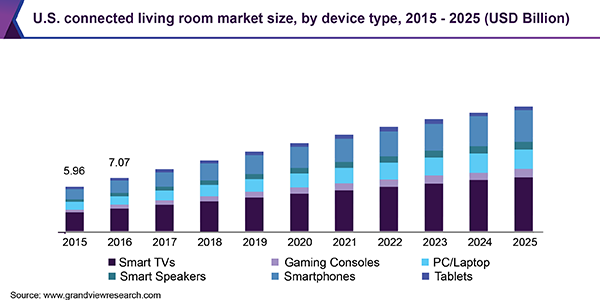 Moreover, robust bandwidth and virtual space availability led by the technological advancements over the past decade and hence ubiquitous introduction of wireless streaming are expected to drive the market. Additionally, increasing usage of internet exclusive entertainment, deployment of reliable and sophisticated music storage equipment, and high-speed data streaming are expected to foster innovation.

The rising popularity of online media streaming is anticipated to fuel the adoption of connected living rooms. The living room connected devices are all the electronic equipment such as televisions, smartphones, and gaming consoles and so on that is connected to the internet. The connected devices could also range from personal computers, laptops, tablet phones, set-top boxes, and other connectivity devices.

The rising preference for second-screen devices and the subsequent growth in their demand is also anticipated to bode well for the market growth. While the developed nations have witnessed a quicker adoption of the latest connected devices, such as smart TVs and smart speakers; the developing countries in the Asia Pacific, which are home to a cost-sensitive customer base, have witnessed rapid adoption of smartphones and laptops over the past few years.

The cultural shift from the lean-forward medium to the lean-back medium coupled with the emergence of smart TVs is particularly providing an impetus to the living room-connected devices market. While laptops and smartphones led the market in the past owing to the level of comfort they offered to the users; smart connected TVs and smart speakers have started redefining the concept of comfort.

The U.S. smart TVs segment is anticipated to reach USD 8.26 billion by 2025, expanding at a CAGR of 8.5% over the forecast period. Smart connected TVs can serve as lean-back media as well as lean-forward media, as they can offer the option of distance viewing while also providing the user with other active features that were previously available only on laptops and personal computers. The wireless connectivity supported by the latest smart TVs is a major factor driving the demand for smart TVs.

Smart speakers are yet another segment with good growth potential during the forecast period, owing to large players such as Amazon entering the market. The extensive research and development over the years have redefined regular speakers with wireless connectivity, voice recognition, artificial intelligence, and so on, which integrates the entire spectrum of devices connected through voice commands.

Smartphones are turning out to be essential devices in a connected living room. The adoption of smartphones has been rising in the developing economies in Asia in line with the growing young population, levels of disposable income, and the continued rollout of telecommunication networks.

The video streaming segment is expected to expand at a CAGR of 8.6% from 2019 to 2025 as consumers continue to subscribe to video-on-demand services. Providers of video-on-demand services, such as Netflix, have introduced affordable subscription options as part of the efforts to expand their subscriber base by tapping new customers in developing countries. The growing preference for live streaming of various events on large-screen smart TVs is also adding to the popularity of video streaming. The growing demand for video streaming services bodes well for the connected living room market. 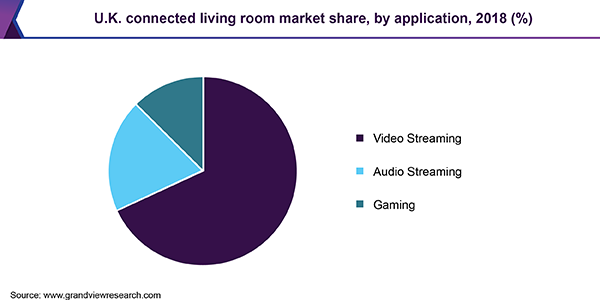 The audio streaming segment also holds promising growth potential. The rising adoption of smart speakers is particularly contributing to the rising popularity of audio streaming services. The proliferation of smartphones, availability of internet connectivity to the masses, plummeting internet subscription rates amid the price wars between internet service providers, and the launch of various audio streaming apps are some of the factors expected to fuel the segment growth.

Asia Pacific led the market in 2018 and is projected to continue its dominance over the forecast period, expanding at a CAGR of 9.1%. Some of the countries in the region, such as China and Taiwan, have established themselves as electronics manufacturing hubs. Some of the largest developing countries, such as India and China, are also located in the Asia Pacific.

The Asia Pacific is home to a large youth population that is highly prompt in adopting the latest technologies. At the same time, the continued industrialization and the rising levels of disposable income in the region have triggered the demand for consumer electronics. The improving accessibility and internet connectivity and the subsequent growth in the number of smartphone users in the region are particularly driving the growth of the regional market.

The growing demand and adoption of smart speakers are particularly evident in North America. The region also claims a large pool of consumers subscribing to video-on-demand, live video, and audio streaming services. Europe follows North America in terms of the adoption of the latest connected devices. While the U.K. has been witnessing growing adoption of smart TVs and smart speakers; countries, such as Germany, have been witnessing a growing consumer inclination toward smartphones and tablet PCs. U.K., Germany, and France also happen to be some of the early adopters of the latest technologies and are expected to contribute to the growth of the Europe market.

Key market players include Samsung Corporation; Netflix Inc.; Google Inc.; and Apple Inc.; among others. This is mainly because of a diversified customer base and enhanced regional reach through various acquisitions and mergers and other agreements. Other prominent service providers in the market include LG Electronics, Panasonic Corporation, and Hitachi Ltd. among others.

A large number of potential suppliers offer similar connected equipment. Most players are engaged in continuous research and development activities to offer unique services at a low cost. Additionally, the launch of new products and a few other strategies such as target marketing is being adopted by the players to gain a competitive edge and greater market presence.

This report forecasts revenue growth at global, regional, and country levels and provides an analysis of the latest industry trends in each of the sub-segments from 2015 to 2025. For the purpose of this study, Grand View Research has segmented the global connected living room market report on the basis of device type, application, and region:

How big is the connected living room market?

What is the connected living room market growth?

b. Asia Pacific dominated the connected living room market with a share of 36.2% in 2019. This is attributable to the continued industrialization and the rising levels of disposable income in the region.

Who are the key players in connected living room market?

What are the factors driving the connected living room market?

b. Key factors that are driving the market growth include the proliferation of connected devices, such as smart televisions, smart speakers, gaming consoles, and set-top boxes, among others, particularly among households.