The global custom procedure kits market size was estimated at USD 5.0 billion in 2018 and is anticipated to exhibit a CAGR of 10.8%. The fast growing geriatric population around the world is serving a main driver for the market growth. As the elderly population is more susceptible to various types of diseases and infections that require surgery, this population acts as a catalyst for the increasing demand for the procedure kits. 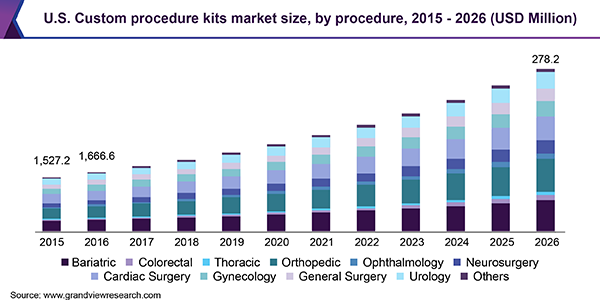 Also, the growing concerns regarding aesthetic appearance are likely to increase the number of cosmetic surgeries eventually fueling the global custom procedure kits market growth. As per the annual plastic surgery procedural statistics, approximately, 17.5 million cosmetic surgeries were performed in the U.S. in 2017. Of these 1.8 million were normal surgical procedures and 15.7 million were minimally invasive surgical procedures.

Other surgeries such as general surgery, urology, and orthopedics are also contributing to the market growth. Between 2013 and 2014, the number of surgical admissions in England was 4.7 million. About 115,758 hip replacement; 81,590 knee replacement; 76,497 gall bladder removal; 50,846 tonsillectomies, and 120,198 hernia repairs surgeries were performed in England.

The risk of developing life-threatening infections & diseases can be significantly curtailed by discarding single-use tools. Various medical devices are manufactured using special plastics with antimicrobial surfaces. The antimicrobial surfaces, even if not sterilized regularly, are highly effective at both repelling as well as killing pathogenic microorganisms. Thus, there is an increasing demand for disposable drapes, gowns, and masks, among other items, in the healthcare industry.

Based on the procedure, the market is segmented into bariatric, colorectal, thoracic, orthopedic, ophthalmology, neurosurgery, cardiac surgery, gynecology, general surgery, urology, and others. The orthopedic segment accounted for the largest share in 2018 due to the increasing joint problems among people.

The Total Joint Replacement (TJR) is one of the most commonly performed, elective surgical procedures in the U.S. As per the National Inpatient Sample, around 6, 80, 150 TKN, and 370, 770 total hip replacement surgeries were performed in 2014. Also, the rise in the number of spina bifida in infants and newborn babies is increasing the demand for surgeries, thereby boosting the market growth.

The hospital segment was the largest in 2018 and is anticipated to lead the market over the forecast period due to the increasing number of hospital admission for surgeries and other medical emergencies. The increasing geriatric population along with increasing chronic diseases requiring surgeries is fueling the market growth. 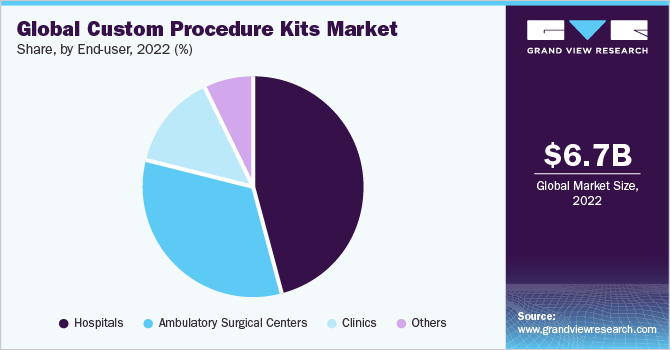 Ambulatory surgical centers are projected to grow at the fastest CAGR of 11.4% throughout the forecast period due to the increasing advantages of ASCs such as shortened hospital stay. Moreover, various government initiatives being undertaken to spread awareness about the benefits of surgical treatments such as early mobilization of patients, low risk of hospital-acquired infections, and rapid recovery are expected to propel market growth.

North America dominated the market in 2018 and is expected to dominate throughout the forecast period. The presence of key market players as well as various initiatives are undertaken by the government to encourage the use of single-use medical supplies to prevent infections is some of the major factors anticipated to contribute to the growth of this region.

The Asia Pacific market is mainly driven by Japan and China. Japan dominated the market in terms of revenue share in 2018. Besides, China is anticipated to be the fastest-growing market during the forecast period in this region. An increase in the number of advanced well-equipped hospitals and a large number of surgical procedures are projected to boost the market over the forecast period.

The global market is highly competitive. Some of the players operating in the market are Medline Industries, Teleflex Incorporated, Owens & Minor, Inc., Medtronic, Cardinal Health, McKesson Corporation, Smiths Medical, Terumo Cardiovascular Systems Corporation, Santex S.p.A., OneMed, and Mölnlycke Health Care. The key strategies undertaken by the market players include merger & acquisitions, expansion, and product launch. For instance, In May 2017, Molnlycke announced the opening of a new manufacturing plant in the Czech Republic. This initiative is considered to be a milestone for its procedure tray business and the largest investment to date signifying the company’s global expansion program.

This report forecasts revenue growth at global, regional, & country levels and provides an analysis on the latest industry trends in each of the sub-segments from 2015 to 2026. For the purpose of this study, Grand View Research has segmented the global custom procedure kits market report on the basis of product, procedure, end-use, and region:

How big is the custom procedure kits market?

b. The global custom procedure kits market size was estimated at USD 5.5 billion in 2019 and is expected to reach USD 6.0 billion in 2020.

b. North America dominated the custom procedure kits market with a share of 45.1% in 2019. This is attributable to the presence of key market players as well as various initiatives undertaken by the government to encourage the use of single-use medical supplies to prevent infections.

Who are the key players in the custom procedure kits market?

What are the factors driving the custom procedure kits market?

b. Key factors that are driving the market growth are favorable government regulations for prevention and control of Healthcare-Associated Infections (HCAI), the constant increase in the number of surgeries being performed worldwide, and benefits of customization.