The global cystic fibrosis therapeutics market size was estimated at USD 3.56 billion in 2016. The increasing prevalence of Cystic Fibrosis (CF) coupled with the rising treatment rate is one of the key factors anticipated to propel the demand for cystic fibrosis therapeutics over the forecast period. Moreover, an increase in R&D funding by both private & public organizations, a rising number of initiatives undertaken by nonprofit organizations, and the presence of favorable reimbursement policies are some of the crucial factors expected to drive the market in the coming few years.

According to the data published by the Cystic Fibrosis Foundation, the incidence of these hereditary disorders is constantly growing. In the U.S., in 2015, there were 28,983 patients as compared to 26,366 patients in 2010. Increasing year-on-year growth in the number of patients further results in surging demand for efficient and effective CF therapeutics. Some of the commercially available approved drug classes are Cystic Fibrosis Transmembrane Conductance Regulator (CFTR) modulators, bronchodilators drugs, mucolytic drugs, anti-infective, antibiotics (oral, inhaled, or parental feeding formulae), anti-inflammatory drugs, and pancreatic enzyme supplements.

A growing number of drug compositions in the pipeline of the key players is one of the pivotal factors expected to impel market growth. Moreover, an increasing number of clinical trials to expand its target patient base with the existing drug portfolio is also among some of the drivers of this market. Growing R&D activities are expected to propel market growth. Some of the pipelined drugs are (VX-445 + tezacaftor + ivacaftor); PTI-428; QR-010; AZD-5634; and POL-6014.

The market is segmented into pancreatic enzyme supplements, mucolytics, bronchodilators, and CFTR modulators based on the drug class. The primary consideration in the treatment of CF is maintaining lung function while controlling respiratory infection and clearing airways of mucus, managing the nutritional therapy, and controlling complications. Kalydeco was the first CFTR modulator drug, which was launched in 2012 in the U.S. As of 2014, it was the only CFTR modulator drug on the market.

In 2016, CFTR modulators accounted for the largest revenue with a share of approximately 47.3% owing to the launch of the new drug Orkambi. This drug is responsible for correcting the function of defective protein caused by the CF gene. This drug class directly cures the underlying cause of the disease. The product launch in 2015 is one of the key factors that can be accounted for its share. Moreover, CFTR modulators are expected to grow with a lucrative growth rate of 24.1% over the forecast period.

Based on the route of administration, the market is segmented into an oral route and inhaled drugs. The oral route accounted for the largest share of nearly 63.7% in 2016 owing to the advantages associated with its administration such as convenience and ease of consumption without the help of a healthcare professional. Growing awareness in emerging economies about the benefits of oral drugs, which include CFTR modulators and pancreatic enzyme supplements is one of the crucial factors anticipated to propel the demand for these drugs. 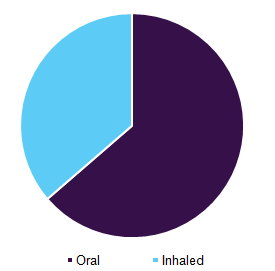 Some of the approved therapeutics that are administered orally are CFTR modulators such as KALYDECO and ORKAMBI and pancreatic enzyme supplements such as Creon/Zenpep, PERTZYE, Ultresa, and Viokace. High commercial availability and huge demand for these drugs to treat CF are expected to drive the oral drug segment. According to the U.S. patient registry 2015, hypertonic saline was prescribed to 21.5% of children falling under the age group of 0 to 3 years and 41.9% of children in the age group of 3 to 5 years. The increasing prevalence of CF among newborn babies is one of the key factors responsible for the growing demand for oral drug formulation.

An increasing number of clinical trials to expand the patient base is one of the key factors anticipated to boost the market. Moreover, the segment is expected to emerge with a lucrative growth rate of 20.1% over the forecast period. A growing number of private and public players investing in this segment is also one of the factors expected to boost the demand for oral medication.

Based on the region, the market is segmented into North America, Europe, Asia Pacific, Latin America, and Middle East & Africa. North America accounted for the largest revenue of USD 2,396.4 million in 2016. CF is most prevalent in North America as most of the people affected with CF are of Caucasian descent. Furthermore, initiatives taken by CF Foundation and Cystic Fibrosis Canada are one of the key reasons that can be accounted for its largest share.

However, Asia Pacific is expected to be the fastest-growing segment with a lucrative growth rate of 18.8%. Although the incidence of CF is less frequently reported in the Asia Pacific region due to underdiagnoses and lack of country-specific CF patient registries, rising awareness about CF disorders & treatment options is expected to boost this segment over the forecast period. Economic development in this region and improving healthcare facilities are expected to boost the market over the forecast period.

Growing awareness amongst healthcare professionals & patient population regarding advanced therapeutics in the market & their advantages over the existing drug portfolio is one of the crucial factors anticipated to boost the market in the coming years. Currently, the availability of CF-specific drugs is low, however, growing approvals and product launches in this market are anticipated to impel growth.

This report forecasts revenue growth at global, regional, & country levels and provides an analysis of the industry trends in each of the sub-segments from 2014 to 2025. For the purpose of this study, Grand View Research has segmented the cystic fibrosis therapeutics market on the basis of drug class, route of administration, and region: