Industry players increasingly investing in R&D of new chemicals that are more potent than existing drugs is likely to augment the growth over the forecast period. Currently, in the U.S., almost 60% of drugs in clinical trials are biologics. Furthermore, mostly all the biologics are administered via the intravenous route. Hence, the rising demand for biologics would further propel the growth during the forecast period.

The safety syringe accounted for the largest share in 2015. Although conventional disposable syringes have a longer presence, the benefits that safety bulbs offer outruns their duration of existence. This eliminates the risk of patient-to-patient transmission of infections.

Moreover, the cost difference between both the products is small, which further shifts the preference toward safety syringes. It is further segmented into retractable and non-retractable, which adds to the wide product portfolio offered by industry players.

In 2015, non-retractable syringes had a bigger share than retractable. Prefilled auto disabled ones are mostly preferred in immunization camps as minimal training is required by healthcare practitioners to use them. The severity of transmission of blood-borne infections is rising and, thus, newer and safer products are introduced in the disposable syringes market. In October 2016, Genentech received the FDA approval for prefilled disposable injections of ranibizumab (Lucentis).

Rising concerns about needle stick injuries and accidental infections is shifting the preference form reusable syringes to disposable ones. According to a WHO study in 2003, around 3 million accidental needle stick injuries occurred that year, which led to 37% of new hepatitis B cases, 39% new hepatitis C cases, and about 5.5% new cases of HIV/AIDS. This portrays the burden of diseases on healthcare workers, which can be eliminated by using disposable syringes and needles.

Therapeutics segment dominated in 2015 due to the growing demand for injectable to treat diseases. According to the WHO, around 90% of products are used for therapeutic care. Treatment of diabetes by delivering insulin comprises a large share in therapeutic injections. High prevalence of diseases such as HIV infection, malaria, tuberculosis, and dengue results in high consumption of injections, which are used in the diagnosis and treatments of these diseases. 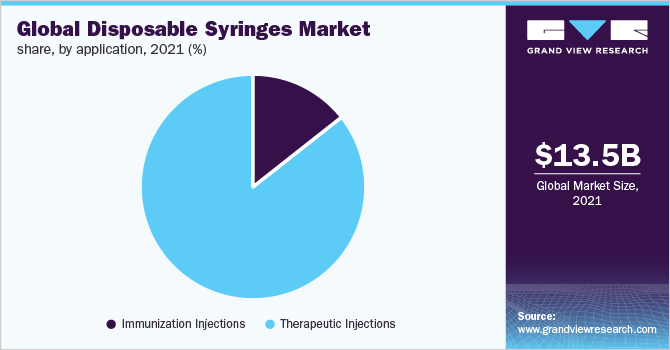 Introduction of new injectable drugs is also expected to augment the industry growth. In August 2015, CytoDyn, Inc. announced the initiation of a clinical trial of their injectable HIV drug. This injectable was expected to replace the daily antiretroviral pill dose with a once-a-week injection, thus improving the quality of life of the 33 million people living with AIDS. The success of this drug would provide a great opportunity for growth to the disposable syringe market over the forecast period.

In 2015, North America emerged as one of the largest regional markets. High prevalence of diseases and increasing preference for injectable drugs are the key factors influencing industry growth. Major disposable syringe manufacturers are also contributing by introducing new products and technologies for improved patient comfort and safety.

In October 2015, B Braun scheduled launch of its echogenic peripheral nerve block needle technology, the Stimuplex Ultra 360. The launch was to be presented in the American Society of Anesthesiologists Annual Meeting, 2015.

Europe hosts headquarters of some of the industry titans such as B Braun, Fresenius Kabi, Covidien (Medtronic, Inc), and Novo Nordisk. European governments have mandated the use of safety-engineered devices in healthcare facilities. Moreover, the U.S. Pharmacopeia Convention and the European Pharmacopeia Convention are two key organizations that set high standards for the safety of patients and healthcare workers. Furthermore, the regulatory bodies keep a regular eye on marketed products.

This report forecasts revenue growth and provides an analysis on the latest trends in each of the sub-segments from 2013 to 2024. For the purpose of this study, Grand View Research has segmented the global disposable syringes market on the basis oftype, application, and region:

Increased hospital admissions and the demand for consumables in the isolation centers across the globe are impacting the dynamics of these market spaces. With many medical devices' manufacturing centers in China, the supply has been severely disrupted which in turn is affecting the medical supply chain. We are working to account for this surge in our estimates. The report will account for Covid-19 as a key market contributor.