The global dolomite mining market size was valued at USD 1.73 billion in 2019 and is expected to grow at a compound annual growth rate (CAGR) of 3.8% from 2020 to 2027. Rising consumption of dolomite as an aggregate for construction applications as well as an ingredient in cement manufacturing is the major factor supporting the market growth. 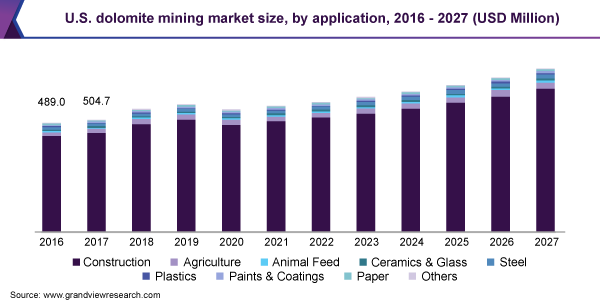 Dolomite rock, also called dolostone, is crushed and sized before it is used as an aggregate mainly for the construction and maintenance of roads. The dolomite mining industry is projected to witness significant growth over the coming years owing to the rising construction industry in the emerging economies of Asia Pacific, such as India, China, Bangladesh, Thailand, Vietnam, and Philippines.

Supportive policies of the U.S. government related to infrastructure development played a key role in driving the market until 2019. For instance, in mid-2017, the U.S. government outlined a robust plan to boost the growth of the infrastructure sector in the country. The funding that was planned through a combination of federal investment and private entities played a major role in driving the product demand.

In 2020, U.S. as well as the global construction industry are likely to take a major hit due to the COVID-19 pandemic. The shutdown of construction sites around the globe is likely to drastically impact the industry growth owing to diminished demand and severe supply chain disruptions caused by the government-imposed lockdown.

The construction application segment dominated the market with a revenue share of 87.7% in 2019. The product is mainly used in the form of crushed stones in construction aggregate. Concrete and asphalt mixes prefer dolomite as a filler material, which is thereafter used in a variety of infrastructure projects, such as airport runways, highways, sidewalks, parking lots, residential streets, curbs, and roadways.

The steel industry is yet another principal application of the product. In the steel industry, the product is used as a fluxing material, protective material for refractory lining, or refractory raw material. Rising steel production in emerging economies of Asia Pacific, such as China and India, is expected to boost the market growth.

The product is also used as a soil stabilizer in agriculture. Sometimes agricultural soil can be overly acidic, which can hamper the growth of plants. The addition of alkaline products, such as dolomite, makes an overly acidic soil basic by increasing the pH of the soil, thereby stabilizing the soil and making it suitable for agriculture. Rising awareness among farmers regarding improving the productivity of the soil is likely to play a major role in driving the segment. 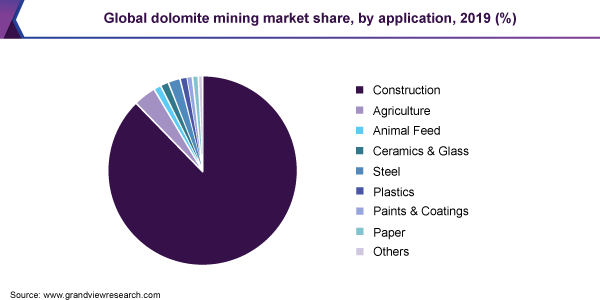 Dolomite is one of the important minerals in the glass industry as MgO and CaO perform the role of network modifiers in the manufacturing process of glass. The glass industry prefers high-grade dolomite with as much low iron and silica content as possible. The glass production has been witnessing significant growth on account of increasing demand from the architecture and packaging industries for the past few years.

North America led the market and accounted for the largest revenue share of 42.2% in 2019. This can be attributed to the presence of a large number of dolomite mines in U.S. In U.S., approximately 99% of the mined dolomite is used for domestic consumption, especially for construction activities.

Asia Pacific is predicted to expand at the fastest CAGR of 4.9% in terms of revenue from 2020 to 2027 due to increasing road construction activities in the region. Rapid industrialization in the region has caused an upsurge in investments in transport infrastructure, which is likely to spur market growth. For instance, the government of India announced allocation USD 22 billion for the transport sector in FY 2020 union budget of India.

In Europe, Turkey led the market and accounted for more than 55.0% share of the revenue generated by dolomite mining in 2019. Renovation of the construction sector in Europe is anticipated to be a major factor in driving the market over the coming years.

In Central and South America, Brazil and Argentina are anticipated to be the frontrunners in the region over the foreseeable future. The resurgence of the construction industry, coupled with improving steel production in the region, is likely to support the regional market growth over the coming years.

The market for dolomite mining is a part of the significantly larger non-metallic mining industry of the globe. The market is highly fragmented comprising independent miners as well as few global players. A large portion of the dolomite distribution yards in the globe is located near major metropolitan cities or areas in order to reduce transportation costs. Major metropolitan cities generally have rails as a means of transportation. Producers generally opt for rail as a preferred mode of transportation owing to reduced transportation costs offered by rails as opposed to truck. Some of the prominent players in the global dolomite mining market include:

This report forecasts revenue and volume growth at the global, country, and regional levels and provides an analysis of the latest industry trends and opportunities in each of the sub-segments from 2016 to 2027. For the purpose of this study, Grand View Research has segmented the global dolomite mining market report on the basis of application and region:

How big is the dolomite mining market?

What is the dolomite mining market growth?

Which segment accounted for the largest dolomite mining market share?

b. North America dominated the dolomite mining market with a share of 42% in 2019. This is attributable to presence of large number of dolomite mines in the U.S. along with majority of the product being used for domestic consumption especially for construction activities.

Who are the key players in dolomite mining market?

b. Some key players operating in the dolomite mining market include Imerys, RHI Magnesita, Calcinor, Carmeuse, Lhoist, and Sibelco.

What are the factors driving the dolomite mining market?

b. Key factors that are driving the dolomite mining market growth include the rising consumption of dolomite as an aggregate for construction application as well as an ingredient in cement manufacturing.