The global electric powertrain market size was valued at USD 19.08 billion in 2019 and is expected to grow at a compound annual growth rate (CAGR) of 13.6% from 2020 to 2027. Increasing sales of electric vehicles, such as hybrid and pure electric vehicles, is a prominent factor fueling market growth. Stringent emission standards by the government authorities, such as emission standards for greenhouse gas (GHG) emissions by the U.S. Environmental Protection Agency (EPA), China VI, and BS-VI in India, drive the market. Moreover, governments' attractive incentives for domestic production and mass adoption of electric vehicles are anticipated to proliferate the market for electric powertrain globally. 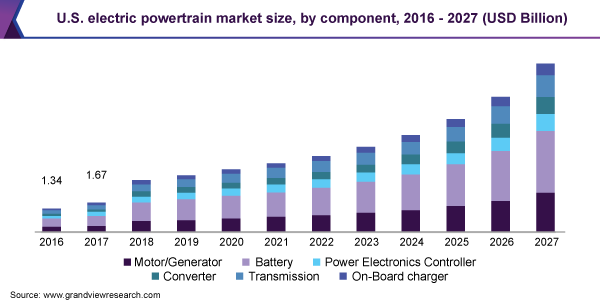 Electric vehicles are the next generation of vehicles that are witnessing a rapid increase in its adoption across the globe. EVs are the future of the automotive market space as fossil fuels are expected to deplete in the upcoming years. Therefore, an alternate source is required to power the vehicles and the solution to such a problem is battery-powered vehicles. Many countries have developed more stringent policies to encourage the adoption of alternative fuel vehicles, such as electric vehicles.

With technological development, the industry is approaching a broad powertrain mix as the automotive industry is pushing itself towards more environmentally friendly and efficient transportation. The overall powertrain landscape is gradually becoming complex and dynamic with the emergence of the electric powertrain. The speed of adoption of electric powertrain would be determined by four factors, namely regulations, infrastructure, technology, and consumer preference.

The penetration of BEVs and PHEVs would strongly determine the current and future adoption of electric powertrain globally. Regulation regarding the CO2 emissions is becoming more rigorous in Europe and U.S. Leading its way, Europe has set its emission limits of 95 g/km by 2020 and further reduction of 37.5 percent by 2030, resulting in a limit of 59 g/km. North America has set the emission limits at over 99 g/km following passenger-vehicle Corporate Average Fuel Economy (CAFE) standards for 2025. To meet the emission targets and avoid penalties, the OEMs would have to sell more electrified vehicles in the coming years.

Technological innovation in battery production technology has made electric vehicles more competitive and conventional ICE vehicles. Batteries comprise a significant cost item in electric vehicles and their cost has shrunk significantly owing to the production process optimization, technology advancement, and economies of scale. With the price expected to decline over the forecast period, the EVs would reach Total Cost Ownership (TCO) parity, which would enable mass-market penetration of electric vehicles.

The world economy has been taken aback by the rate at which the COVID 19 crisis has escalated. The pandemic has impacted the public health economy and the social well-being of people around the world. The electric powertrain market is mainly vulnerable to the current COVID 19 crisis due to its dependency on global sourcing for its core technology, the batteries. The electric vehicles are expensive as compared to their hybrid and gas-powered counterpart and the market is suffering more as the customers became more tight-fisted in the current scenario. Europe is one of the most prominent regions in the adoption of electric vehicles and is also witnessing a sharp decrease in the sales of electric vehicles. The European region consists of countries that are among the worst-hit nations, such as Italy, Spain, and Germany, in the COVID-19 scenario. The European carmakers are closing their manufacturing facilities temporarily owing to employees’ health concerns and falling demand.

The market has been segmented based on the component type into motor/generator, battery, power electronics controller, converter, transmission, and on-board charger. The battery segment accounted for the largest revenue share of 35.5% in 2019. The battery is the most prominent component when it comes to the electrification of vehicles. It is the sole power source in BEVs or is in the combination of other power sources in other types of green vehicles. In BEVs, the battery pack constitutes around 50% of the total cost.

Motor/generator is anticipated to register the highest CAGR of 15.1% over the forecast period. The growth of the e-motor is attributed to accelerated penetration of BEVs and PHEVs globally. The BEVs and PHEVs can be equipped with similar e-motor configurations. Moreover, joint ventures between suppliers and OEMs emerging to produce e-motors would significantly leverage the demand for electric powertrains. For instance, in August 2019, Nidec Corporation, an e-motor manufacturer, announced a joint venture with GAC Components Co., Ltd., which is a business entity of Guangzhou Automobile Group Co., Ltd. based in China. The joint venture’s unconfirmed name is Guangzhou Nidec Auto Drive System Co., Ltd., and would engage in the manufacturing of automotive traction motors.

The BEV segment accounted for the largest revenue share of 66.8% in 2019. The market has been segmented based on the electric vehicle, including BEVs (Battery Electric Vehicles) and HEV/PHEVs (Hybrid Electric Vehicles/Plug-In Hybrid Electric Vehicles). This is attributed to the slowdown in the adoption of internal combustion engine vehicles and restrictions on CO2 targets. The mass adoption of BEVs is a more effective solution to reduce the emission and the total cost of ownership in the long run. Moreover, advancements in battery technology and reduction in lithium-ion battery prices would leverage the demand for BEVs in the forecast period. 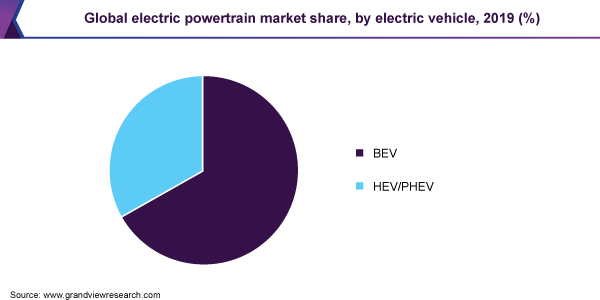 HEV/PHEVs are anticipated to register the highest CAGR of 14.0% over the forecast period. These types of vehicles are designed to enhance the use of the internal combustion engine in interaction with the electric powertrain. The PHEVs has a more powerful electric motor and a significantly larger battery that can be recharged with the help of an external source of power. PHEVs offer a more flexible option to its consumers as they are less concerned about recharging.

Europe is anticipated to be a significant market for electric vehicle powertrain as the region is characterized by the presence of numerous OEMs. Many European countries, such as Norway, the Netherlands, Sweden, and France, witness significant EV uptake rates. This, in turn, is expected to boost the market demand in the region during the forecast period. North America has dominance and high adoption of electric vehicles. Major prominent players such as Tesla, BMW, Chevrolet, Ford, Volkswagen, and Nissan have a strong presence in the region. Moreover, U.S. has a developed infrastructure for electric vehicles, such as charging stations, also known as EVSE (electric vehicle supply equipment), which would further propel the demand for electric powertrain.

The market is highly competitive and consolidated, with prominent companies accounting for a significant share of the total market revenue. Players are focused towards new product development and enhancement of their existing product portfolio. For instance, in 2017, Magna International Inc. announced a joint venture with Huayu Automotive Systems Co., Ltd., a subsidiary of SAIC Motor. The joint venture would support Magna's first e-drive business in China.

Moreover, these players are consolidating their market shares by undertaking M&A activities. For instance, in 2018, Cummins Inc. announced the acquisition of Efficient Drivetrains, Inc. (EDI). EDI is a Silicon Valley-based producer of hybrid and fully- electric power solutions catering to commercial markets. Furthermore, in 2019, Dana Inc. announced the acquisition of Nordresa Motors Inc., an electric powertrain manufacturer and supplier. Engineering expertise of Nordresa Motors Inc. would help the company to transition to full-electric powertrains development and manufacturing. Some of the prominent players in the global electric powertrain market include:

This report forecasts revenue growth at the global, regional, and country levels and provides an analysis of the latest industry trends and opportunities in each of the sub-segments from 2016 to 2027. For the purpose of this study, Grand View Research has segmented the global electric powertrain market report on the basis of component, electric vehicle, and region:

How big is the electric powertrain market?

What is the electric powertrain market growth?

Which segment accounted for the largest electric powertrain market share?

b. The Asia Pacific dominated the electric powertrain market with a share of 59.2% in 2019. This is attributable to the growing implementation of stringent regulations coupled with the growing initiatives by the governments for producing electric vehicles.

Who are the key players in the electric powertrain market?

What are the factors driving the electric powertrain market?

b. Key factors that are driving the market growth include increasing demand for electric vehicles, increasing stringent norms, and modernization of conventional engines across the world.