The global lithium-ion battery market size was valued at USD 22.8 billion in 2016 on account of its increasing demand for grid storage and electric vehicles as it offers lightweight and high-energy density solutions. Increasing registration of electric vehicles (EVs) along with decreasing lithium-ion battery cost is anticipated to augment industry size over the forecast period.

The rising number of PV installations and nuclear power plants along with the commencement of New Wind Energy Projects are anticipated to stimulate the market growth over the forecast period. Rising off-grid installations in China, U.S., Germany and India along with increasing adoption of lithium-ion batteries in medical equipment is expected to promote industry expansion over the forecast period. 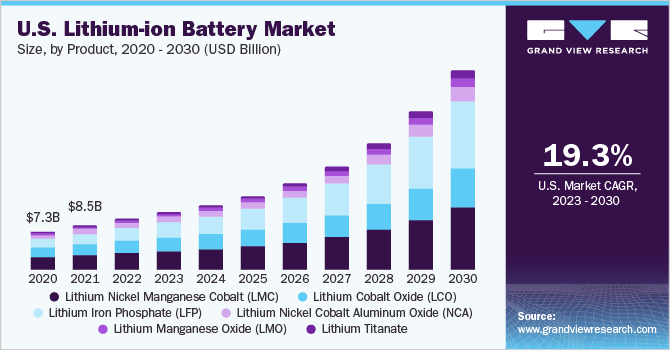 The product is commonly used in electronic devices such as mobile phones, digital cameras, and power tools. The demand for the product in the manufacturing, solar power, and railway industries is expected to increase with the growing need for power backup and storage. High density, long life span and reduction in battery prices will drive product demand over the forecast period.

China’s EV sales are predicted to witness growth in the coming years owing to government subsidies & purchase quotas on traditional vehicles in big cities and the presence of major electric vehicles players, including Tesla, Nissan, Chevrolet, BMW, Ford, Fiat, and Toyota, mainly in the U.S., the UK, China, and Germany.

Hybrid & electric vehicles will witness growth on account of substitution from fuel to electric batteries. In addition, government's stringent regulations on emission norms in order to safeguard the environment and to reduce the degradation based options are expected to play a critical role in shaping the overall battery market.

Lithium Nickel Manganese Cobalt battery was the prominent segment and accounted for 26% of the global share in 2016. Increasing adoption of NMC in power tools, e-bikes and other electric powertrains on account of its higher energy density, lower cost, and longer cycle life will fuel its demand over the forecast period. NMC offers overall performance and excels on specific energy and possess high capacity and high power.

Lithium iron phosphate (LFP) batteries is expected to grow at the CAGR of 17.5% from 2017 to 2025. The LFP batteries offer excellent safety and long-life span to the product. Rising demand for LFP batteries in portable and stationary application, as they require high load currents and endurance is expected to augment market growth.

Extensive R&D for development of effective and high-quality products was another initiative undertaken by the manufacturers. Supportive government regulations coupled with incentives and subsidiaries to electric vehicles have driven their sales in these countries. High stability of these batteries at high temperatures has increased their demand in this segment.

Consumer electronics application was valued at USD 11.92 billion in 2016 on account of high durability and reliability of these batteries in consumer appliances such as laptops and smartphones. Growing electronics industry in various countries including China, Japan, Taiwan, and South Korea is expected to increase industry expansion over the forecast period. 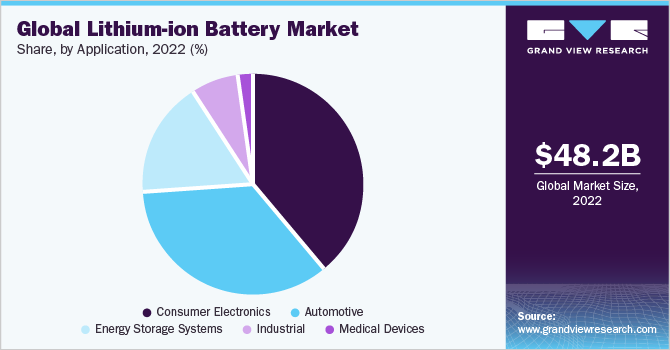 Energy storage systems is expected to augment show significant demand rise at a CAGR of 21% from 2017 to 2025 as a result of increasing off-grid installations. The growth is driven by government support, and incraesing solar PV installations in the U.S., China and Germany. In addition, growing concern for air pollution, greenhouse gases and carbon emissions is anticipated to result in greater adoption of solar power over the forecast period.

Asia Pacific is expected to show high revenue gains at a CAGR of 17.7% from 2017 to 2025. Increasing demand for mobiles and tablets in various countries including India, China, Japan and Thailand is expected to augment industry expansion over the forecast period.

China is the world’s leading producer of wind energy and is expected to witness significant growth in the production of wind energy over the forecast period. Wind capacity output is likely to cross 200 GW by 2020 and will drive the demand for energy storage systems in the country, which is expected to augment battery demand.

North America is expected to witness a significant growth over the forecast period owing to the growing electric vehicle and consumer electronics sales in countries including U.S. and Mexico. The increasing demand for the product in smart phones owing to its extended shelf life and enhanced efficiency is expected to drive the lithium-ion battery market.

The lithium-ion battery market is highly competitive in nature as a result of presence of large and small scale manufacturers, specifically in the U.S., China, and Japan. The market is dominated by various major participants including Panasonic, Samsung, BYD Co., Ltd, LG Chem, GS Yuasa Corporation, and Hitachi.

Key players rely on strategies such as mergers, acquisitions, and joint ventures in order to increase their presence in the market. They also focus on increasing their market share and profitability through product innovation and R&D activities. Industry rivalry is expected to be high over the forecast period with fluctuating raw material prices resulting in major entry barriers for new participants.

In February 2017, BYD Co., Ltd. launched new high and low voltage battery energy storage systems under the B-Box product line in Australia. This strategic move is expected to enable the company to fulfill the increasing energy storage requirements in the residential sector.

In March 2015, LG Chem Ltd. signed an agreement with Daimler AG, a Germany-based multinational automotive firm, to supply lithium-ion batteries for installation in the latter’s smart electric vehicles. This strategy is likely to enhance its distribution network and boost its presence as a key automotive battery provider.

This report forecasts volume and revenue growth at global, regional & country levels and provides an analysis on the industry trends in each of the sub-segments from 2017 to 2025. For the purpose of this study, Grand View Research has segmented the global lithium-ion battery market on the basis of product, application and region:

China produces a majority of the world's Lithium Ion batteries and COVID-19 has slowed battery manufacturing in key industrial centers. The major Li-ion manufacturing players in China such as CATL and BYD, are faced with a high prospect of production delays. The limitation on labour movement are expected to contribute to reduced battery cell production this year.