Electric Three Wheeler Market Size, Share, And Trend Analysis Report By Battery (Lithium-ion, Lead Acid And Others), By Power, By End-use, By Region, And Segment Forecasts, 2022 - 2030

The global electric three wheeler market size was valued at USD 829.5 million in 2021 and is anticipated to register a compound annual growth rate (CAGR)of 7.5 % during the forecast period. The market is expected to experience growth owing to the rising inclination towards electric vehicles over conventional vehicles powered by fossil fuel. The growing concentration of greenhouse gases in the environment has promoted society to look for sustainable modes of transportation options, especially electric three-wheeler vehicles. Moreover, new startups such as Nobecars, Arcimoto, and others are booming in the electric three-wheeler landscape, further driving the market growth. 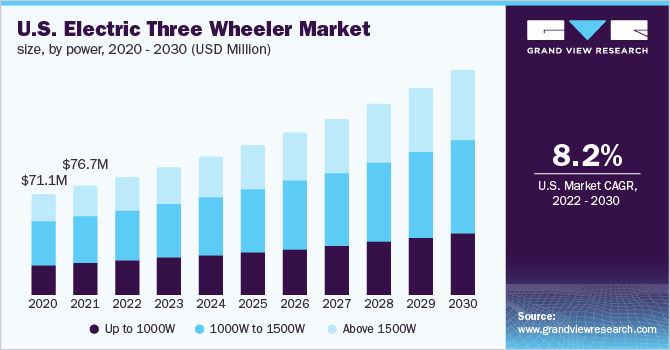 The COVID-19 pandemic has affected industries and businesses worldwide. The outbreak of coronavirus had forced federal authorities to impose lockdown and containment measures across countries; this, in turn, confined the world population to their homes. The automotive industry faced a shortage of raw materials and components which brought automotive production across major markets to a halt. The electric three-wheeler manufacturers felt the repercussions of the pandemic with reduced demand for electric vehicles and a disrupted supply chain. However, as the lockdown was lifted, the demand for electric three-wheelers experienced growth, and easement of supply chain disruption further propelled the market growth.

The absence of standard charging infrastructure and high battery costs are major restraints hindering the electric three-wheeler market growth. The limited presence of charging infrastructures, such as standardized charging plugs and standardized charging capacity parameters, is fueling the vehicle range anxiety for drivers. Additionally, safety concerns over lithium-ion batteries catching fire are further restraining the market growth. This is promoting the government worldwide to draft more stringent regulations concerning safety standards to be implemented during manufacturing batteries and other components.

Based on battery type, the segment is segragated into lithium-ion, lead-acid, and others. The lithium-ion battery has a dominant market share of 43.33% in 2021. The growth is credited to their advantages, such as increased battery life because of increased energy density, compact size, less charging duration, and low maintenance. The increasing number of electric vehicles, hybrid electric vehicles, and plug-in hybrid electric vehicles have further propelled the demand for lithium-ion batteries. The declining prices of lithium over the year owing to widespread use is also contributing to a growth trajectory.

The lead-acid battery is likely to experience growth with the highest of 7.5% CAGR in the forecast period. Lead-acid batteries are popularly used in EVs due to their ability to provide a high-power surge, positioning them as a reliable energy source. Technological developments in battery packaging and design have led to increased storage capacity and durability. The rising sales of electric three wheelers in countries such as India and China coupled with the establishment of electric mobility start-up in European, North American, and Asian regions are contributing to market growth.

Based on power type, the electric three wheeler market includes up to 1000 W, 1000 W to 1500 W, and above 1500 W. The 1000 W to 1500 W segment has accumulated the highest market share of 42.65% in 2021 due to its affordable operational cost. The segment's growth is also attributed to the market's demand for high-powered electric three-wheeler vehicles. The instant torque provided by the 1000W to 1500W motor increases vehicle efficiency with better acceleration from the start making them a preferred choice by the OEMs. As the electric motors can reach high speed faster than ICE, they are able to operate with a single gear and still reach their maximum speed.Therefore, these technical advantages make 1000W to 1500W motors ideal for passenger carriers. 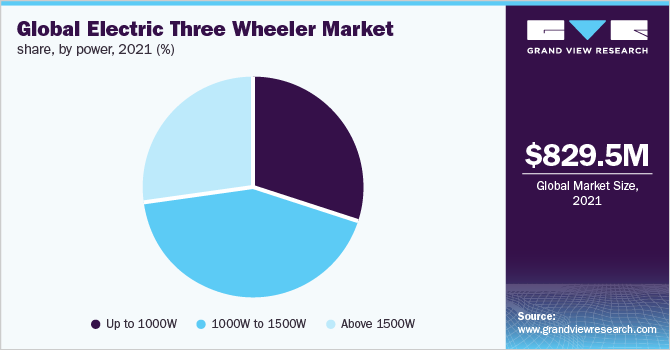 The above 1500 W segment is also expected to grow with the highest 7.7 % CAGR during the forecast period owing to rapid industrialization. This aids the formation of electric three-wheeler fleets with efficient power capacity allowing the vehicles to travel a longer distance for transporting cargo. The 1500 W powered vehicles are commonly used for industries such as construction, mining, machine manufacturing, and delivery of apparel and perishable food products. Furthermore, the demand for the product with increased range is also boosting the electric three wheeler market. The motor power enables higher acceleration and spins while carrying cargo load, which enables the vehicles to cover a greater distance range in a trip.

The passenger carrier segment had a 59.77% market share in 2021. The segment growth is attributed to an increase in the demand for three-wheelers as a public transport option for daily and last-mile commutes. In developing countries with a high density of middle-income level population, public transport is preferred over private commute. Electric three-wheelers are emerging as an eco-friendly and affordable option and this is propelling the market growth of electric three-wheeler passenger carriers. Moreover, governments on the central and state level have introduced incentives to favor the development of sustainable public transport in rural and urban parts of the country, thus boosting the market growth.

The Asia Pacific region had the highest market share of 64.63% in 2021 and has the highest market share of 7.5%.  The regional dominance is attributed to factors such as growing public opinion towards electric vehicles, significant demographic growth, major use of affordable public transport for the last mile, and daily commuting in the region. China and India are major regional markets, with three-wheelers used as passenger carriers and good carriers. Furthermore, the government of India is advocating to promote of electric three-wheeler and other electric vehicles by taking initiatives such as FAME and PLI to provide subsidies & incentives for E-3W. 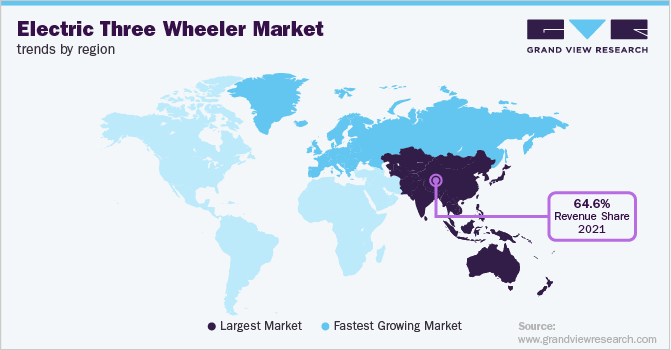 The European region is also expected to show market growth due to the presence of prominent automobile manufacturers who are aggressively investing in building an electric mobility portfolio. These manufacturers are also dedicating resources to the R&D of innovative technology for electric mobility solutions. For instance, the European Union has launched an R&D program called the EU-LIVE, funded by Horizon 2020 for developing mobility solutions and models for L-category vehicles. These initiatives are further encouraging market growth.

The players are concentrating on building an electric three-wheeler product portfolio that is affordable, has an increased ranger, and has optimum charging duration. The major players are investing significantly in developing high-end electric powertrains, battery technologies, and motors. The manufacturer also leverages the government incentives such as tax subsidies and discounts which help reduce the price of the vehicle. The electric three-wheeler landscape is also experiencing a trend of emerging electric mobility startups trying to capture market space by competing with established players in the market.

Manufacturers are resorting to strategies such as increasing production capabilities, launching new vehicles in the market, and forming partnerships. For instance, Atul Genentech Private Limited, a subsidy of Atul Auto Limited, Valeo, and Honda Powerpack Energy has entered a partnership to provide an electric powertrain produced by Valeo for their electric three-wheeler to be paired with Honda’s swappable battery solution. The collaboration between the three-domain experts together will help accelerate the electrification of three-wheelers in the market. Some prominent players in the global electric three wheeler market include:

This report forecasts revenue growth at global, regional, and country levels and analyzes industry trends in each of the sub-segments from 2018 to 2030. For this study, Grand View Research has segmented the global electric three wheeler market based on battery type, power, end-use, and region: 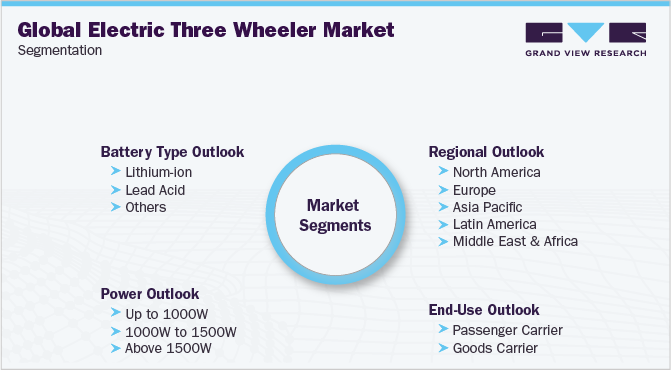 How big is the electric three wheeler market?

b. The global electric three wheeler market size was estimated at USD 829.5 billion in 2021 and is expected to reach USD XX billion in 2022.

What is the electric three wheeler market growth?

b. Passenger carrier is anticipated to grow at a CAGR of 7.7% over the forecast period. Owing to increasing maintenance and fuel costs, electric three wheelers are considered an attractive transportation alternative. Furthermore, electric transportation is becoming an eco-friendly alternative with growing pressure to limit carbon footprints

Who are the key players in the electric three wheeler market?

What are the factors driving the electric three wheeler market?