The global electrical steel market size was USD 24.85 billion in 2018 and is anticipated to grow at a CAGR of 7.2% in terms of revenue from 2019 to 2025. Increasing demand for motors in electric vehicles is expected to remain a key driving factor over the forecast period.

Electrical steel production processes include annealing, hot rolling, cold rolling, and insulation coating. It is used in laminated cores of transformers, motors, and generators owing to the ability of ferromagnetic materials to enhance the magnetic effects of current carrying coils. 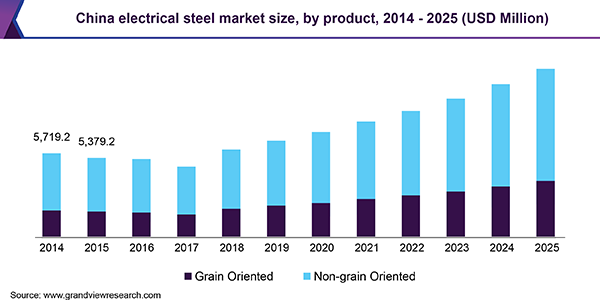 Electrical steel is used to produce the laminated cores of the motors. Various types of motors such as brushless DC motor, induction motor, DC series motor are used in electric vehicles. Hence, increasing demand for electric vehicles is likely to increase the utilization of motors over the coming years. As per the International Energy Agency (IEA), in 2018, the global electric vehicle sales were 5.1 million in expected to reach 23 million by 2030. This is anticipated to augment market growth over the coming years.

With the growing demand for electric vehicles, development in the infrastructure of electric vehicles such as charging stations is likely to boost the product demand. Charging stations consume large amount of electricity or solar power. Increasing demand for electricity is anticipated to boost the need for transformers, which in turn is expected to fuel the market growth over the coming years.

It is an iron-silicon alloy with a silicon level of 3%. It is used in various forms such as laminated, wound or punched sheets. Properties such as low core loss and high permeability make them suitable in enhancing the efficiency and performance of generators and transformers.

It is an iron-silicon alloy with a silicon level of 2 to 3.5% and is used as iron core material. Magnetic properties of non-grain oriented electrical steel are practically the same in any direction in the plane of the material.

Electrical steel is used in various applications such as transformers, motors, inductors, batteries, and welding equipment. Transformers is the dominant application segment that accounted for 52.8% of overall volume in 2018. The growth of the segment is attributed to the rising demand from renewable energy. Transformer core is produced using electrical steel to increase the electrical resistivity of iron, which leads to reduction in eddy current losses.

Motors is the fastest growing segment owing to the rising demand electric vehicles, wind turbines, and compressors. The product is used to manufacture laminated iron cores of rotor and stator. Its properties such as high punchability, low iron loss, and high flux density make it suitable in brushless DC motors. 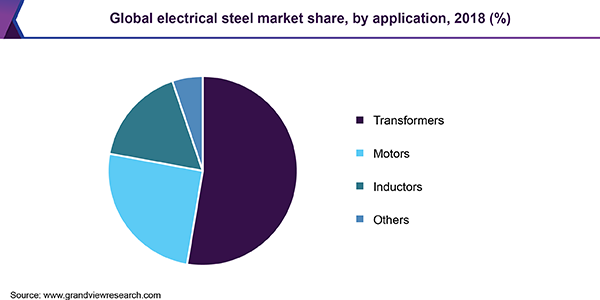 The laminated cores of inductors are produced using electrical steel to reduce the eddy current losses. The inductors segment is anticipated to grow significantly at a CAGR of 5.3% in terms of volume over the coming years. The growth is attributable to the growing electronics industry where inductor is a critical component as it is used to store electrical energy in the form of magnetic energy.

The product is also widely used in rotating machines such as welding equipment. In welding equipment, it is used to manufacture electric resistance welded (ERW) pipe. It is produced by cold-forming electrical steel sheet into a cylindrical shape.

Asia Pacific accounted for 36.3% of the global market revenue share in 2018. The demand for the product in the region is expected to be driven by the increasing energy consumption especially in China and India. For instance, energy demand in India is anticipated to increase by more than 50% from 2017 to 2040.

Moreover, the growing manufacturing industry in the region is likely to drive the product demand over the coming years. Manufacturers of motors, transformers, and inductors are expanding their presence in the region in order to meet the growing demand for electric vehicles, wind turbines, and electronics. In May 2019, Nidec Corporation announced to expand its electric motor production capacity with an investment of USD 100 million in Zhejiang Province, China to meet the growing demand from electric vehicles and smart phone manufacturers.

Europe was the second largest market in terms of revenue in 2018. Growing demand for electric vehicles is likely to increase the need for AC motors in the region. According to the IEA, 80% of the total cars sold will be hybrid or electric cars by 2050. In February 2018, WEG, a Brazilian electric motor manufacturer increased the production capacity of electric motors with an investment of USD 16.64 million at its plant in Santo Tirso, Portugal to meet the growing demand from electric vehicle manufacturers. This is likely to increase the product utilization over the coming years.

This report forecasts revenue and volume growth at country & regional levels, and provides an analysis of the industry trends in each of the sub-segments from 2014 to 2025. For the purpose of this study, Grand View Research has segmented the global electrical steel market report on the basis of product, application, and region: