The global electroencephalography devices market size was valued at over USD 829.3 million in 2018 and is anticipated to expand at a CAGR of 8.7% over the forecast period. Increasing prevalence of neurological disorders and rising awareness about them are major factors contributing to the growth. High incidence of Alzheimer’s, epilepsy, dementia, multiple sclerosis, Parkinson’s disease, and stroke has been key in the rising adoption of electroencephalography (EEG) devices. According to the data from the Alzheimer's Association, almost 5.7 million Americans were suffering from Alzheimer’s in 2018. It further estimates that by 2050, over half the population over the age of 65 will suffer from dementia. 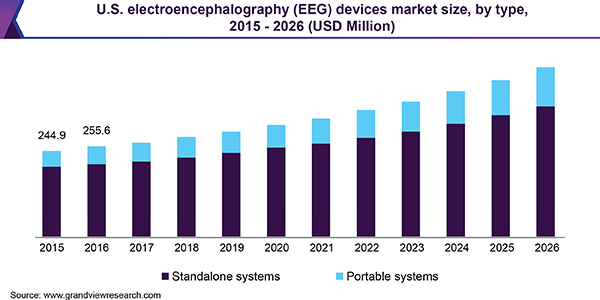 According to the data from the ALS Association, over 5,000 Americans are diagnosed with Amyotrophic Lateral Sclerosis (ALS) each year and these figures are expected to double in the near future. Estimates from the National Vital Statistics Report compiled by the Centers for Disease Control and Prevention (CDC) indicate that stroke was the fifth leading cause of mortality in U.S. Data from the same source indicates that the average years of potential life lost under 75 years of age due to cerebrovascular diseases was 187.1 in the U.S. These facts are indicative of rising prevalence of the disease, requiring constant monitoring and treatment, propelling demand for EEG systems.

According to the Alzheimer’s Disease International, South East Asia is expected to witness a 226% rise in Alzheimer’s cases whereas the African region is anticipated to witness a rise of 345%, and the Americas region is expected to see a rise of 248%. Data from the same source also indicate that by 2050, the global number of Alzheimer’s disease patients will reach over 106.23 million. Rising geriatric population globally owing to enhanced healthcare systems is, therefore, facilitating increased R&D in the field of neuroscience. Takeda’s collaboration with Denali Therapeutics focused on Alzheimer’s and Parkinson’s and Biogen’s tie-up with Pfizer for the development of cognitive drugs for schizophrenia are anticipated to positively impact market growth during the forecast period.

Rising R&D investments by manufacturers to provide advanced brain monitoring devices is another major factor significantly contributing to the growth of the electroencephalography systems market. For instance, Natus Medical, Inc. invested around USD 33.4 million for R&D in the 2016. The companies are investing in R&D to improve the existing products and to develop new ones to cater to the increasing demand for advanced devices.

On the basis of product, the electroencephalography devices market is segmented into 32-channel EEG, 25-channel EEG, 8-channel EEG,40-channel EEG, 21-channel EEG, and multichannel EEG. In 2018, 32-channel EEG was the largest revenue grossing segment and is also projected to maintain its dominance during the forecast period. Technological advancement in 32-channel EEG products and its high adoption by healthcare professional are the major factors driving growth.

Standalone EEG systems are systems that are fixed or implanted at a particular place. Such systems are used mainly in hospital settings and consists of hardware and software solutions that allow physicians to interpret results efficiently. EEG devices are used to record electrical activities in the brain. With an increase in the number of neurological diseases like tumors, cerebral palsy, strokes, and other brain-related disorders, a huge number of patients have been admitted for treatment in hospital settings. This has largely contributed to the surge of standalone devices that are used in such settings.

Portable EEG devices are transportable in nature and can deduce similar results as those done by standalone devices. These devices are often used in ambulatory services and other paramedic settings where electrical activity of the brain has to be measured in order to understand the condition of the patient. Portable systems are also used in homecare settings to deal with comatose patients and patients suffering from other neurological disorders.

Portable devices segment is expected to exhibit the highest CAGR during the forecast period. Major factor contributing to the growth are increasing focus of manufacturers on technological advancements, such as portability, light weight, and simultaneous raw data acquisition. Also, rising demand of portable devices for clinical practice and outdoor investigation is projected to bode well for the segment growth.

Hospitals led the overall market in 2018 owing to the growing number of patients suffering from traumatic brain injuries, epilepsy, and other neurological disorders. In addition, increasing focus on development of healthcare infrastructure in developing countries of Asia Pacific and Africa propels the segment growth.

Hospitals held the highest market share owing to increasing admissions of patients suffering from traumatic brain injuries, epilepsy, and other neurological disorders. Hospitals are primary end-users of the ECG devices because of their need to record the rhythm and electrical activity and evaluate the results in detail for clinical and research purposes. Thus, this segment dominated the market in 2018, owing to the high patient turnaround and frequent readmissions. 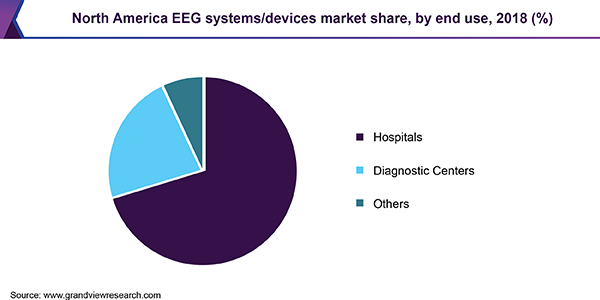 Diagnostic centers segment is expected to witness the fastest growth during the study period, due to the growing awareness regarding neurodegenerative disorders. The rising awareness among people leads to demand for advanced EEG products for diseases diagnosis and prevention. The demand for advanced diagnostics products is high in developed countries like the U.S. and Germany, due to highly developed healthcare infrastructure in these countries.

North America led the EEG devices market in 2018 followed by Europe and Asia Pacific. Rising prevalence of various sleep and neurodegenerative disorders and accessibility to insurance are major factors contributing to the regional growth. Moreover, the presence of highly developed healthcare infrastructure and strong distribution and sales network of leading vendors in this region are anticipated to drive the growth.

Favorable reimbursement policies in the U.S. have surged the usage of these systems for diagnosis of neurological disorders. Presence of government organizations such as the National Institute of Neurological Disorders and Stroke (NINDS) that provide funding for R&D activities applicable in treatment of brain nervous disorders contributed to the dominance of the regional market.

Europe is expected to showcase steady growth over the forecast period owing to the presence of well-established healthcare system. The establishment of various nonprofit organizations such as the European Multiple Sclerosis Platform (EMSP) is expected to further boost the market. According to the EMSP, approximately 9 million people in Europe are affected by neurodegenerative diseases. This organization encourages research and data collection related to multiple sclerosis and focuses on spreading awareness regarding the same in Europe and other regions, thus, boosting the growth.

Asia Pacific is estimated to expand at the highest CAGR during the forecast period because of increasing geriatric population in this region. Also, untapped opportunities along with rapidly developing healthcare infrastructure in countries such as India and China is driving the market growth.

Companies such as Electrical Geodesics, Inc.; Medtronic; and Cadwell Industries, Inc. have an extensive product portfolio coupled with strong regional presence. Existence of a broad range of product portfolio and new product development are some of the major factors contributing to the growth of the companies.

The major companies are undertaking various organic as well as inorganic strategies such as new product development, collaborations, acquisitions, mergers, and regional expansion for serving the unmet needs of their customers. For instance, in July 2016, Compumedics Ltd and Bestmed announced a new 3-year distribution agreement for Compumedics’ neurodiagnostic and monitoring systems across the South and Central China.

This report forecasts revenue growth at global, regional, and country levels and provides an analysis of the latest industry trends and opportunities in each of the sub-segments from 2014 to 2026. For the purpose of this study, Grand View Research has segmented the global electroencephalography devices market report on the basis of product, type, end-use, and region:

How big is the electroencephalography devices market?

b. The global electroencephalography devices market size was estimated at USD 888.9 million in 2019 and is expected to reach USD 956.1 million in 2020.

What is the electroencephalography devices market growth?

b. The global electroencephalography devices market is expected to grow at a compound annual growth rate of 8.7% from 2019 to 2026 to reach USD 1.6 billion by 2026.

Which segment accounted for the largest electroencephalography devices market share?

b. North America dominated the electroencephalography devices market with a share of 39.9% in 2019. This is attributable to the rising prevalence of various sleep and neurodegenerative disorders and accessibility to insurance.

Who are the key players in electroencephalography devices market?

What are the factors driving the electroencephalography devices market?

b. Key factors that are driving the market growth include increasing prevalence of neurological disorders and rising awareness.