The global embedded non-volatile memory market size was valued at USD 129.9 million in 2014. The market growth is attributed to the increasing penetration of IoT-based devices and services in developing countries. The need for ubiquitous connectivity necessitates the rapid deployment of inexpensive and low power consuming products with the ability to communicate securely. Therefore, the proliferation of IoT-based devices and services is estimated to spur the demand significantly over the forecast period.

Embedded non-volatile memory is a small-sized chip used to meet a variety of embedded system applications. It is primarily used in smart card, SIM card, microcontrollers, PMIC, and display driver IC for the purpose of data encryption, programming, trimming, identification, coding, and redundancy. Manufacturers focus on providing secured eNVMs for MCUs used in the IoT-based devices.

High efficiency and compact design associated with eNVMs are expected to replace comparatively bulky, conventional, standalone non-volatile memories. It is one of the key components of IoT-based microcontroller devices. The use of low power and low-cost embedded non-volatile memories can decrease consumer electronics cost significantly, which is also anticipated to catapult product demand over the next few years. The growing need for security in the connected devices is anticipated to provide avenues for growth owing to the secured layer provided at the most vulnerable physical layer, which cannot be breached through passive, semi-invasive, and invasive methods. These memories are also used in automobiles, particularly in head-up displays and next-generation technology such as key-less push button start features. Therefore, increasing demand for smart cars is anticipated to catalyze embedded non-volatile memory market growth over the next eight years. Miniaturization of devices such as smartphones as well as automobile components has instigated manufacturers to reduce the process node size without affecting the performance. For instance, Chinese manufacturer, HHGrace is investing in R&D, in order to scale down the process node to deliver compact and efficiently performing eNVM solutions, PWM ICs, and MEMS chips.

eFlash is expected to dominate the product segment owing to high penetration in automobiles, smart cards, consumer electronics, and industrial applications. However, the shift in the adoption of eFlash to FRAM in IoT microcontroller devices might drive the eFlash growth in the automotive sector.

eE2PROM is closely related to eFlash in functioning, durability, density as well as read & write throughput. However, the size of eE2PROM varies widely owing to the integration of the security module, which extends the application area from SIM card, social security card, U-key, and bank card to a variety of security ICs. However, several other products such as RRAM and STT-RAM with highly efficient security technology are anticipated to slowly replace eE2PROM over the forecast period. 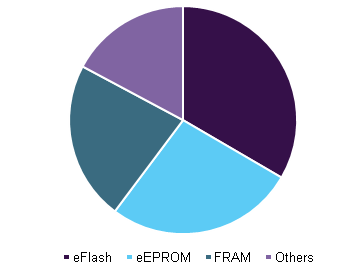 Ferroelectric RAM (FRAM) is a hybrid memory, which can be efficiently used as a substitute for straight flash and SRAM combined. CMOS technology has eliminated the issues pertaining to density in FRAM, and is, therefore, expected to provide avenues for growth. FRAM demand was low as compared to eFlash and eE2PROM. FRAM is primarily used in microcontrollers pertaining to IoT devices and systems. Resistive RAM (RRAM) is another embedded hybrid memory, capable of storing up to 1 TB of data on a single chip, using the ability of 3D-stacking multiple cells in different configurations in order to save space while still increasing the storage limits.

In 2014, Asia Pacific emerged as a leading region in terms of eNVM demand and accounted for over 30% of market share in the same year. This may be attributed to rising demand from companies manufacturing IoT-based devices.

Increasing industrialization along with the availability of low-cost raw materials from recycled e-waste is expected to be a key factor providing avenues for market growth. Migration of several microelectronics as well as smart electronics manufacturers in this region in order to lower the manufacturing cost, primarily associated with labor is also anticipated to impel the regional demand over the next eight years.

The North America eNVM market is expected to witness considerable growth owing to the presence of key MCU manufacturers such as Silicon Lab, and Texas Instruments. However, the migration of manufacturing units for the aforementioned companies in developing regions in order to gain cost advantage may stabilize demand over the next few years.

eNVM product manufacturers emphasize on scaling down the semiconductor side, by manufacturing highly compact process nodes while increasing efficiency and reducing cost. Key industry players focus on incorporating or embedding several application-related modules such as the security module for smart card and security ICs as a part of their core business strategy.

This report forecasts revenue growth on global, regional & country levels and provides an analysis of the industry trends in each of the sub-segments from 2012 to 2022. For the purpose of this study, Grand View Research has segmented the global embedded non-volatile memory market on the basis of products and regions: