Europe, Middle East & Africa wax melt market size was valued at USD 1.10 billion in 2020. It is expected to expand at a compound annual growth rate (CAGR) of 11.9% from 2021 to 2028. The rapid development of the residential and commercial sectors leads to an increased demand for wax melts to add instant warmth and aroma to the atmosphere of any room. The wax melts market is expected to grow on account of the increasing demand for effective, cost-efficient, and safer products. Over the past few years, key players have developed new and innovative products that specifically cater to the various needs of consumers. Major players have launched new wax melts aimed at specific demographics rather than the general consumer pool. 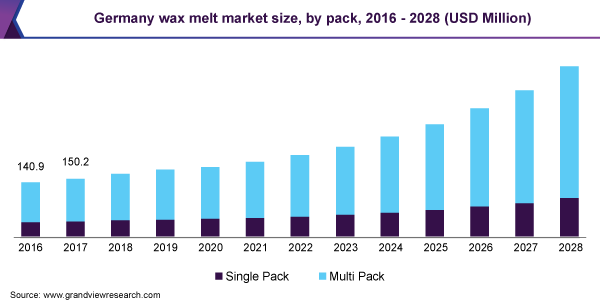 For instance, in January 2020, Febreze launched three new scents: Forest, Wood, and Ocean that take cues from nature and are more refined and subdued. The new Forest, Wood, and Ocean scents from Febreze are for people who want more modern, updated smells beyond the traditional flower varieties. They are available nationwide in a variety of Febreze products such as Air, Plug, Fabric, Wax Melts, and Car.

Wax melts are becoming more and more popular and now many consumers favor them over candles to make their homes smell beautiful. Wax melts do not have a wick, nor do they require a flame, like candles. Wax melts are usually warmed in an electric wax melt warmer containing a small 15-watt light bulb that is included at the base of the warmer. The light bulb provides just enough heat to warm the wax melts, tarts, or cubes, releasing the scent in as little as 5 to 10 minutes. The National Fire Protection Association estimated that from 2009 to 2013, fires related to candles caused an estimated USD 374 million in direct property damage. Decorative candles are appealing, but the exposed flame poses the risk of something else catching fire by accident.

In developed countries across EMEA, the COVID-19 lockdown has left most consumers confined to their homes, thus, generating the demand for home fragrances such as wax melts. Since several people are working from home, they are interested in both cleanliness and creating a pleasant home environment. This has prompted the sales of home fragrances such as wax melts. In the U.K. one-third of the purchases were made in the home category.

Several raw material suppliers for wax melts are reporting punishing, double-digit drops in sales and earnings as the COVID-19 pandemic caused demand for their material to dry up. However, leading players such as Givaudan and Symrise, in the flavor and fragrance industry are witnessing a surge in both sales and earnings. Sales fell only modestly at International Flavors & Fragrances. It turns out that the demand for consumer products and their ingredients got held up during the pandemic and in many cases even grown.

In terms of value, the poured wax melt dominated the market with a share of 57.2% in 2020. The segment is estimated to grow steadily during the forecast period. Hand-poured wax melts are a domain of artisanal companies that use soy wax or beeswax as the key raw material (as compared to paraffin wax being dominant in pressed wax melts) and are more prominent across Europe than in other parts of the world due to local heritage associated with the pouring and rolling process of wax melts. 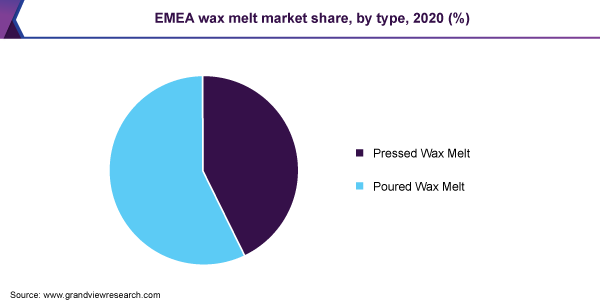 The pressed wax melt segment is expected to register a CAGR of 12.5% from 2021 to 2028. Poured wax melt requires more manpower and time, and, hence, needs a lot more investment and time than needed for the pressed wax melt process to manufacture the melts. Manufacturers prefer the pressing process for producing wax melt as mass production enables them to save both cost and time.

Compared to the pouring process, pressed wax melts can be produced in mass quantities via extrusion molding, which drastically brings down the incurred cost with large-scale production. Presently, pressed wax melts are commonly found in the form of scented cube air fresheners, with the process being prominently used by companies such as P&G (for Febreze brand) and SC Johnson (for Glade wax brand).

In terms of value, the multi-pack segment dominated the market with a share of 77.4% in 2020. Owing to the rise in tourism that has led to an increase in the demand for multi-pack wax melts. There is a rise in demand for aromatherapy and spa treatments and wax melts help in creating a relaxing atmosphere. Tourism has also increased in EMEA countries. The hospitality sector such as hotels, spas and restaurants purchase multi-packs of wax melt to cater to the needs of their consumers.

The single pack segment is estimated to expand at a CAGR of over 11% from 2021 to 2028. The segment accounted for a share of around 20% in 2020. Consumers, especially millennials, prefer environment-friendly products. Many consumers prefer to buy single packs of wax melts to try new fragrances. This consumer behavior trend will boost the demand for single-pack wax melts in the future.

The U.K. dominated the Europe, Middle East and Africa wax melt market with a share of 21.8% in 2020. The U.K. wax melts market is governed by stringent government regulations concerning harmful spray emissions. Most of the manufacturers in the U.K. are Volatile Organic Compound (VOC) compliant. The U.K. market is fragmented due to the presence of various small- and large manufacturers.

The market for wax melt in Germany was valued at USD 180.0 million in 2020 and is projected to register a CAGR of 11.9% over the forecast period. Germany is the main market for wax melts in Europe. Being the most stable economy in the EU and an increase in private consumption expenditure makes Germany second fastest-growing market for wax melts. Substantial development in infrastructure and the easy availability of raw materials are some of the other factors that will fuel the market.

The EMEA wax melts market is characterized by the presence of various well-established players such as Kerax Limited, P&G, Aroma Works, and Sonneborn, in addition to several small and medium players such as Arran Aromatics, Best Kept Secrets, Breeze Candles, Canova, Charles Farris, and Cereria Ronca Srl. The market players face stiff competition from each other as some of them are among the top candle manufacturers and have a large customer base.

Arran Aromatics is actively focusing on marketing its products through sponsorships in sports and other events. For instance, in 2019, the company sponsored the Scottish Women’s Football League Division 1 Player of the Year. This helped the company gain traction among women and increased its reach among the target audience. Similarly, the company became the official gifting partner for the BAFTA Scotland event in November 2019.

Charles Farris has been in partnership with retailers like Barker & Stonehouse, ARIA, BarnBury, Bentalls Kingston, Fenwick, Roxtons, and Zoohause Ltd. This helps increase the company’s exposure to newer audiences. The company is now expanding its business to manufacture candles in solid colors and a modern palette. Conventionally, the company offered trade account services to churches across the U.K. In recent years, the company has extended its products and services to event planners, florists, etc. Some of the prominent players operating in Europe, Middle East & Africa wax melt market are:

This report forecasts revenue growth at global, regional, and country levels and provides an analysis of the latest industry trends and opportunities in each of the sub-segments from 2016 to 2028. For the purpose of this study, Grand View Research has segmented the Europe, Middle East & Africa wax melt market report on the basis of type, pack, and country:

b. Poured wax melt dominated the EMEA wax melt market with a share of 57.2% in 2020. This is attributable to more prominent across Europe than in other parts of the world due to local heritage associated with the pouring and rolling process of wax melts.

Who are the key players in Europe, Middle East & Africa wax melt market?

b. The EMEA wax melt market is characterized by the presence of various well-established players such as Kerax Limited, P&G, Aroma Works, and Sonneborn, in addition to several small and medium players such as Arran Aromatics, Best Kept Secrets, Breeze Candles, Canova, Charles Farris, and Cereria Ronca Srl.

b. Key factors that are driving the EMEA wax melt market growth include rapid development of the residential and commercial sectors leads to an increased demand for wax melts to add instant warmth and aroma to the atmosphere of any room.