The global esports market was valued at USD 2,008.4 million in 2021. It is expected to expand at a compound annual growth rate (CAGR) of 21.9% from 2022 to 2030. Increasing live streaming of games, formidable investments, rising audience reach, engagement activities, and infrastructure for league tournaments are the factors influencing the market growth. The profitable opportunities created by increasing professionalization in the industry for influencers, gamers, event organizers, and game developers benefit the market. Millennials consider esports a professional career option, owing to the increasing popularity of gaming tournaments, one-to-one sponsorships, streaming revenues, and impressive international prize pools. Additionally, colleges and universities have started providing dedicated esports programs to develop skilled professionals. 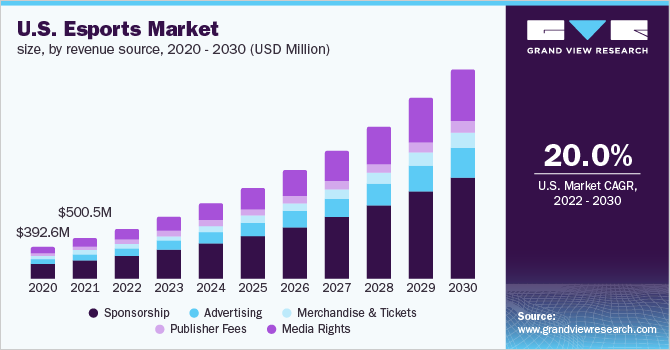 Ohio State University, Becker College in Massachusetts, and Virginia's Shenandoah University provide the esports degree course. Additionally, more than 100 high schools in the U.S. are conducting esports programs and other games such as traditional soccer. Some institutes are also providing scholarships to the players to increase the growth of the course; theUniversity of California Irvine is giving scholarships to the top 6 players.

However, Riot Games formed the League of Legends for the Europe and North America region, providing an organized format for the tournament. Later, Activision Blizzard, Inc. introduced the overwatch league, providing essential infrastructure and revenue for the esports competitions. Hence, the league model in the tournaments has established numerous revenue sources for the esports ecosystem, promoting overall industry growth.

Dota2, Fortnite, League of Legends, and Counterstrike: Overwatch and Global Offensive are the gaming industry leaders. The video gaming industry has evolved from a hobby to a professional career option. The tournaments are attracting investors, including celebrities and international brands, as sponsors due to the immense engagement of fans for esports tournaments.

Over the past few years, increasing views and fan base has created new growth avenues and resulted in increased investment. In recent years, investments in this industry have made considerable progress as the ecosystem provides various investment options across various subsectors. The market mainly attracts traditional venture capital firms, strategic investors, and private equity.

In 2020, the market experienced a total investment of USD 2 billion, a rise of 116% compared to 2019. The investments in the esports market are expected to increase during the forecasted period owing to the increasing number of franchise-style leagues and rising audience. Investors' growing interest is likely to result in the market's steady growth in the estimated period.

The free-to-play gaming model has been found effective, with considerable in-game microtransactions fueling the companies' revenue, consequently supporting the industry growth. The games in the free-to-play gaming model have become popular as they have no upfront costs, and the fees are charged for featured or additional content. Counter-Strike: Global Offensive, League of Legends, and Fortnite are some games that feature microtransactions. The free-to-play model has promoted diversity and helped to bring young gamers together in the esports ecosystem resulting growth of the overall gaming population. Microtransactions have played a crucial role in the esports market, ensuing the overall revenue growth of the esports market.

For instance, EPICENTER Major 2020, Combo Breaker, the Pokémon Championship Series, and many other tournaments were scheduled between March and May are canceled. The cancellation of events affected ticket sales and merchandising, resulting in a downward trend in the first half of 2020. Several other tournaments were postponed, such as ESL Americas Pro League, California Overwatch League, ESL One Rio 2020 Counter-Strike, and others. Most of the events shifted to online mode due to lockdowns and quarantine, resulting in higher viewership on streaming platforms. Due to ease of lockdown and restrictions, the market has experienced steady growth in 2021. The rise in the number of investments is anticipated to fuel the further development of the market. 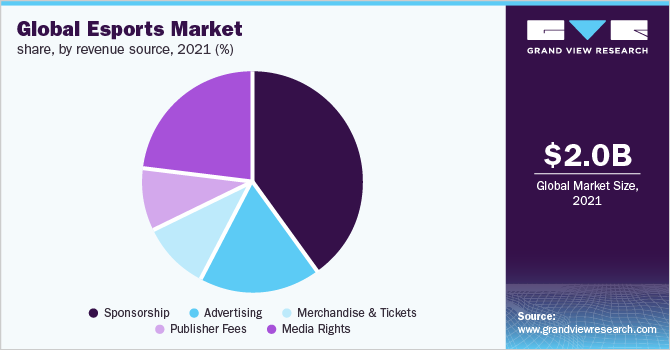 The increasing competition in the sponsorship industry has led brands to seek differentiation and authenticity through sponsorships in the esports and gaming industry. Many non-endemic brands chose to enter eSports on the familiar ground through a digital extension of existing traditional sponsorship relationships—for example, football with the eSports extension of FIFA.

The media rights segment is estimated to expand at the highest CAGR of over 23.0% during the forecast period and is one of the significant revenue-generating segments. Media rights comprise all the revenue paid to teams, leagues, and event organizers to obtain the rights to broadcasting esports content on a channel. Media rights are anticipated to generate considerable revenue because of numerous individual leagues, championships, and events held on various streaming platforms regularly. Twitch Interactive, Inc. has the eminent platform for live streaming adopted by fans to watch major tournaments. Recently, Twitch had witnessed fans spending 24 billion hours watching streamers in 2021, an 45% increase in viewership compared to 2020.

Additionally, in March 2022, Rooter Sports Technologies Private Limited acquired the media rights for all IPs of Sky Esports for one year. Sky Esports is the leading esports tournament organizer in South Asia and has self-owned IPs. The acquisition of media rights will allow Rooter sports to stream competitions in India in several languages such as English, Hindi, Bengali, Kannada, Tamil, Malayalam, and Telugu. These M&A activities are expected to fuel the growth of the media rights segment in the forecasted period.

North America seized a significant revenue share of over 37.0% in 2021, with the U.S. at the forefront. The region has continuously dominated the market for decades. Growth and investment are expected to continue due to the Overwatch League and franchised North America League of Legends Championship Series (NA LCS). With the contribution of leagues, players, game developers, streaming platforms, and TV networks, esports has become a multi-million-dollar business in the U.S.

The Asia Pacific is anticipated to dominate the market during the projected period. The growing number of internet users and mobile gaming has fueled the growth of esports in the region. China announced esports as an official sport in 2003; since then, the market has provided professional jobs and esports operators in the country. South Korea is a well-known country for esports, providing standard infrastructure to gamers, containing coaches, gaming-house, analysts, and cooks.

For instance, in April 2022, Korean Esports Association(KeSPA) signed a three-year sponsorship deal with SK Telecom. The agreement has made SK Telecom an official sponsor of KeSPA and will train the Korean esports team for upcoming Asian games. Such initiatives and developments in the market are expected to fuel further growth in the forecasted period.

The companies hold a notable history of producing intellectual games such as World of Warcraft, Call of Duty, FIFA, Candy Crush Saga, and StarCraft. The market is experiencing several mergers and acquisition activities, thus becoming competitive. Tencent Holding Limited is leading in the esports market by investing in companies such as Supercell Oy; Riot Games, Inc.; Kakao Corp; and Epic Games, Inc.Activision Blizzard, Inc. is a leading esports league organizer that attracts advertisers, broadcast partners, and professional players. Call of Duty League and Overwatch League are the two major events organized every year by Activision Blizzard, Inc. Some of the prominent players in the global esports market include:

This report forecasts revenue growth at the global, regional, and country levels and provides an analysis of the latest industry trends in each of the sub-segments from 2018 to 2030. For this study, Grand View Research has segmented the global esports market report based on revenue source, and region:

How big is the Esports market?

What is the Esports market growth?

Who are the key players in Esports market?

Which segment accounted for the largest Esports market share?

b. North America dominated the Esports market with a share of 37.7% in 2021. This is attributable to rising awareness coupled with lucrative prize pool and formidable investments by the large firms.

What are the factors driving the Esports market?

b. Key factors that are driving the Esports market growth include rising live streaming of games and increasing infrastructure for the league tournaments.