The global eubiotics market size was valued at USD 4.65 billion in 2016. Favorable regulatory scenario and increasing awareness about meat quality are expected to drive the market over the forecast period.

Eubiotics term refers to the maintenance of microflora in the intestinal tract. Eubiotics are mainly used to improve the health status as well as performance improvement in domesticated animals. They mostly include probiotics, prebiotics, organic acids and essential oils. The efficacy of the product is mainly dependent on the antimicrobial effects as well as their ability to alter the gut flora. 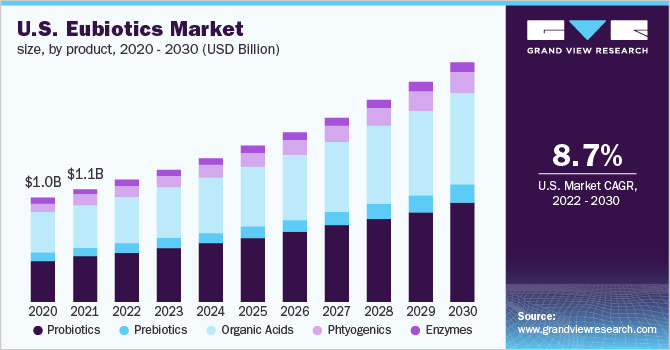 The ban on antibiotics as a means to promote growth has been banned in regions such as Europe. This scenario has shifted focus to the development of new alternatives such as Eubiotics. Antibiotic traces have been found in meat thus adversely affecting human health. Due to adverse health effects of antibiotics, they become a topic of public controversy thus prompting governments to ban its usage. Eubiotics market has benefitted from this trend in the recent past and is expected to do so over the forecast period.

Livestock farmers are concerned with disease outbreaks such as swine flu, bird flu and various foot and mouth infections. The increasing concerns regarding quality and safety of meat as well as the established regulatory scenario discouraging antibiotics usage are prompting farmers to shift towards viable alternatives such as eubiotics. This trend is expected to benefit the overall market growth over the next eight years.

The industry is characterized by the presence of international players striving for innovation and novel product development. Companies have developed advanced delivery medium which further enhances the product performance. Carriers such as those derived from sucrose and cellulose have been developed which further increase product efficiency. Customized product offerings to suit various application needs such as growth, nutrient nourishment, and microbiota control have been developed thus further fueling market growth.

Growing consumption of meat across the globe has increased the overall demand for it thus causing strain on the livestock industry. Also, consumer awareness about meat quality has grown in the recent past. To cater to this rising demand, livestock farmers try to raise yield by using various feed additives such as eubiotics. The growing meat industry is expected to compliment eubiotics market growth over the forecast period.

Limited availability of land resources as increasing shortage of water has put limitations on animal fodder production. Livestock farmers are trying to optimize feed utilization to increase output. Eubiotics complement optimized feed utilization and help in increasing yield as they prevent disease outbreak, maintaining gut health and increasing immunity. Such trends are expected to fuel market growth over the next eight years.

Probiotics emerged as the largest segment in 2016, occupying almost 54% market share and are expected to dominate the market over the forecast period. Probiotics such as Enterococcus faecium and Bacillus spp. are used in various animal applications such as gut health maintenance and immunity development. Rising awareness regarding probiotics usage and competitive strategies adopted by major market players to generalize probiotics usage in animal feed are expected to drive the segment growth.

Organic acids emerged as the second largest product segment and were valued at USD 1.39 billion in 2016. These acids are used as forage and grain preservatives in animal nutrition. They discourage the growth of bacterial as well as mold pathogens thus contributing to better utilization of feed resources. They can be used for applications such as pigs, aquaculture, and poultry. Organic acids prove an effective solution in addressing feed quality and hygiene issues. All these attributes are expected to drive the segment growth over the forecast period.

Essential oils segment was valued at USD 0.44 billion in 2016 and is expected to grow at an anticipated CAGR of 7.7% over the next eight years. Essential oils provide positive effects on the gut function and nutrient digestibility. Research has found that they possess anti-microbial, anti-inflammatory, and antioxidant properties, thus fueling the segment growth.

Solid form dominated the market and was valued at USD 2.79 billion in 2016. The segment is expected to grow at an anticipated CAGR of 8.3% over the next eight years. Novel solid products such as beadlet, cross-linked beadlet, and flakes shave been developed. Solid form products combining energy materials and flavoring compounds have been developed. Such developments are favoring the segment growth.

The liquid form segment is expected to be valued at USD 3.54 billion by 2025 growing at an expected CAGR of 8.0% from 2017 to 2025. Liquid products having active substances such as essential oils are available in the market which helps in maintaining a healthy appetite, feed efficiency improvement, and natural defense mechanism improvement.

Regarding application, gut health dominated the market in 2016 and is expected to continue to do so over the next eight years. The application market worth was valued at USD 1.62 billion in 2016 and is expected to grow at an anticipated CAGR of 8.2% from 2017 to 2025. Eubiotics help in maintaining gut health by impacting the microflora in the gut. Novel product development promoting proper gut health at all stages of growth have been developed thus benefitting the segment growth. 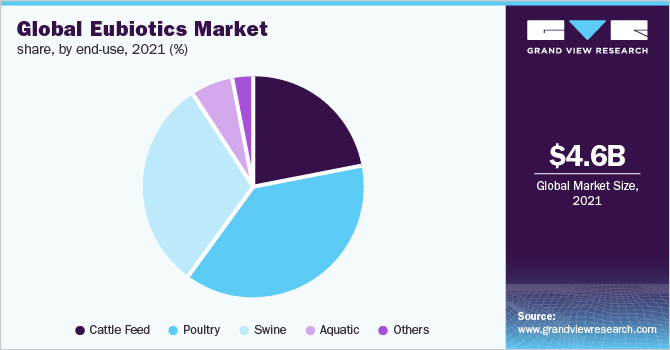 The demand for meat, milk, and eggs has witnessed a rapid growth over the past few years. Farmers try to increase their livestock yield to cater to the rising demand. Eubiotics have beneficial effects on the animals such as faster growth rate, high rate of lay in hens with reduced feed intake and performance improvement. Such factors are benefitting the yield application of eubiotics which is expected to grow at an anticipated CAGR of 8.1% from 2017 to 2025.

Eubiotics used for poultry end use dominated the overall market in 2016 with over 35% market share. The market worth for the same is expected to grow at an anticipated CAGR of 8.4% over the forecast period. There has been a rising demand for poultry meat and products such as eggs across the globe thus forcing poultry industry participants to adopt efficient methods to increase yield. Eubiotics complement this pursuit as they result in increased yield and immunity.

Swine end use emerged as the second largest end use in 2016 closely following poultry end use. Growing pressure to reduce antibiotics usage is driving eubiotics demand in the segment. Swine industry participants are globally willing to indulge in feed additives which are natural, effective and prove as an efficient alternative to antibiotics. Such trends are driving the eubiotics industry for swine end use.

Among the cattle feed, dairy end use dominated the segment and was valued at USD 720.09 million in 2016. Eubiotics help in stabilizing the gut flora and lower the pathogenic pressure. It also contributes to an increase in overall health and awareness of the animal. All these factors result in increased yield thus favoring market growth for eubiotics used in cattle end use.

Europe dominated the global eubiotics industry and occupied over 38% market share in 2016. Strict regulations banning the usage of antibiotics as growth promoters, the presence of major industry participants and widespread awareness regarding usage of eubiotics such as probiotics for animal feed applications is driving market growth in the region. Awareness regarding the meat quality and concerns over antibiotics traces in it have been the major factors driving demand growth in the region.

Asia Pacific is expected to witness the highest growth rate and is anticipated to grow at a forecasted CAGR of 8.4% from 2016 to 2025. Strong demand from countries such as China and India is driving the overall regional growth. There has been a significant shift towards meat consumption in these countries due to rising standard of living, and increasing disposable income. Also, major industry participants have focused on the region due to arising opportunities. Such trends are expected to benefit industry growth in Asia Pacific.

North America market is expected to be valued at USD 1.84 billion by the end of forecast period. Growing awareness regarding meat quality, shift in preference towards antibiotic alternatives, and growing meat consumption in the country are expected to aid market growth. Central and South America market worth is expected to grow at an anticipated CAGR of 7.9% from 2017 to 2025.

Industry participants are trying to acquire market share by developing innovative and customized product offerings. The synergistic combination of different elements combined with eubiotics has been developed to obtain maximum output. Products having proven efficacy and scientific evidence backup are being provided by the industry participants.

Companies are trying to increase regional market share by developing products tailor made to suit local animal requirements. Also, these products are tested in the local feed research institutes. Companies are focusing on other areas of end use such as pet and aquaculture to increase market share.

This report forecasts revenue growth at global, regional & country levels and provides an analysis on the industry trends in each of the sub-segments from 2014 to 2025. For the purpose of this study, Grand View Research has segmented the global eubiotics market on the basis of product, form, application, end use and region: