The Europe high density polyethylene jerrycan market size was valued at USD 1.6 billion in 2019 and is expected to grow at a compound annual growth rate (CAGR) of 4.6% from 2020 to 2027. This growth in demand is ascribed to the rising demand for unitary packaging solutions for liquids namely chemicals, petrochemicals, functional agents, food additives, and others. The product offers convenience, sturdiness, and safety during transit. Most end-use consumers prefer using the product for handling hazardous chemicals during both storage and transport. The development of jerrycans with added innovative features, such as easy-to-pour functionality and improved stackability, for convenience of use and robustness, is expected to further bolster their demand. The product demand in the oil & gas end-use sector of Germany is projected to increase over the forecast period. A wide range of lubricants, such as automotive oils, industrial oils, process oils, greases, and metalworking fluids, are used across several industries, which will bolster the regional demand for the product over the projected period. 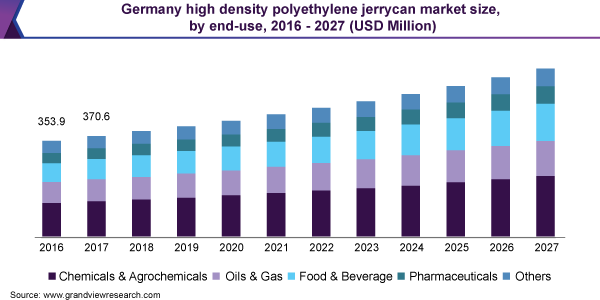 In 2019, Europe accounted for over 314 million units of vehicles, compared to that of 308 million units in 2018. Thus, the rising number of vehicles coupled with increasing expenditure on the operation of personal transport equipment is expected to generate demand for various products including lubricants and coolants. This, in turn, is anticipated to drive the market demand in the coming years.

Jerrycans were initially developed using metals, such as steel, for carrying fuel during World War 2. However, they are now widely manufactured using plastic, especially high-density polyethylene (HDPE), owing to several advantages over metals. Moreover, metal containers are more prone to rust and corrosion, which leads to contamination, especially while carrying hazardous goods, such as fuel and chemicals.

HDPE is a lightweight material and thus makes the overall handling and transportation of the cans easy while improving the logistical efficiency. In addition, HDPE cans offer a less expensive packaging alternative to metal cans, which is anticipated to drive their demand over the forecast period. Furthermore, they are more durable and can be recycled, as HDPE is one of the most easily recycled plastic polymer.

However, the prices of raw materials vary as per their availability and demand. HDPE is derived from the catalytic polymerization of ethylene and the cost of ethylene is highly dependent on the pricing trends in the petrochemical industry. These factors may have a negative impact on market growth.

The chemicals and agrochemicals end-use segment accounted for over 35.5% share of the total revenue in 2019. Jerrycans are widely used for packaging a wide range of hazardous and non-hazardous chemicals including acids, solvents, adhesives, additives, paint thinners, disinfectants, household detergents, sanitary supplies, and emulsions as well as agrochemicals, such as fertilizers and pesticides.

Europe is the second-largest producer and a major exporter of chemicals and specialty chemicals globally. The region is characterized by the presence of several major chemical manufacturers, such as Covestro AG, BASF SE, Evonik Industries AG, Linde plc, Akzo Nobel N.V., and Tikkurila Oyj, which is expected to have a positive impact on the demand for HDPE jerrycans in the coming years.

Food & beverages is estimated to be the fastest-growing end-use segment. The product is commonly used for storing various beverages and food items, such as vegetable oils, fruit pulps, soft drink concentrates, milk, maple syrup, etc., which are either utilized by individual households or by food service establishments.

The below 10 liters capacity segment led the HDPE jerrycans market in 2019 and accounted for over 70% of the overall share. The segment is anticipated to expand further at the fastest CAGR over the forecast period. The cans of this capacity are widely used for storing small quantities of products, such as household chemicals, agrochemicals, food & beverages, pharmaceuticals, and lubricants, as well as for storing fuels, such as petrol, and diesel.

Chemicals, such as disinfectants, used in hospitals, clinics, and veterinary premises can also be stored in jerrycans with capacities below 10 liters. They can also be used for household water collection and storage. Such a wide scope of application bolsters the segment growth. 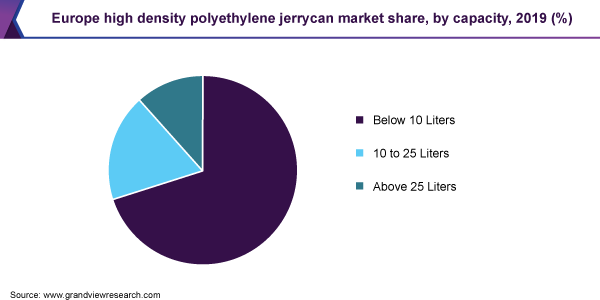 The 10 to 25-liter capacity segment will register the second-highest CAGR from 2020 to 2027. Such cans are commonly used for storing and transporting lubricants used in commercial vehicles, industrial machines, such as gearboxes & compressors, and other heavy-duty applications. For instance, Motul, a France-based company, offers lubricants packaged in 20-liter capacity jerrycans for commercial vehicles and farming machines among others.

The automotive industry is one of the prominent sectors in Europe and is responsible for generating demand for various products, such as chemicals, paints & coatings, and lubricants. The presence of numerous companies operating in the value chain of the automotive sector is further expected to drive the demand over the forecast period.

The manufacturing sector including automotive & OEMs in Europe is highly developed and produces a wide range of products, such as passenger vehicles, commercial vehicles, aftersales automotive parts, machinery, equipment, and tools among others. According to the European Automobile Manufacturers Association (ACEA), automobile manufacturers operate around 309 vehicle production and assembly plants located in 27 countries across Europe.

Germany was the largest vehicle manufacturing country in the European Union in 2019. Around 5,120,409 passenger cars, 362,438 light commercial vehicles, and around 159,885 medium and heavy commercial vehicles were produced in Germany in 2018.The efficient functioning of these automobiles requires engine oils and other lubricants to be replaced from time to time. HDPE jerrycans are commonly used for packaging these lubricants. In addition, they can be used for carrying fuels, such as petrol and diesel.

France is one of the leading agricultural producers in Europe. Some of the majorly produced agricultural products include cereals, potatoes, sugar beets, and milk among others. France is also one of the leading producers of wine in the world. Thus, established industries and high exporting capacities bolster the demand for HDPE jerrycans in the country.

The U.K. is characterized by the presence of leading lubricant companies, such as Royal Dutch Shell PLC, Goodall, Bates & Todd Limited, and Morris Lubricants. These companies offer a wide range of lubricants, such as automotive engine oils, gear & transmission oils, greases, and brake fluids that are packaged using HDPE jerrycans.

The market is highly fragmented owing to the presence of several large-, medium-, and small-sized companies. The market has been witnessing a significant number of expansion and M&A activities over the past few years. For instance, in January 2018, Schütz, a leading player engaged in processing plastic and metal, expanded activities in its plant in Tarragona, Spain through machinery upgrades and investments in new infrastructure to shorten the production cycle and to cater to the growing demand. Some of the prominent players in the high density polyethylene jerrycan market include:

This report forecasts revenue growth at the regional and country levels and provides an analysis of the latest industry trends in each of the sub-segments from 2016 to 2027. For the purpose of this study, Grand View Research has segmented the Europe high density polyethylene jerrycan market report on the basis of capacity, end-use, and country:

How big is the Europe high density polyethylene jerrycan market?

b. The Europe high density polyethylene jerrycan market size was estimated at USD 1.62 billion in 2019 and is expected to reach USD 1.70 billion in 2020.

b. Chemical & Agrochemical end-use segment dominated the Europe HDPE Jerrycan market with a share of 35% in 2019, owing to its extensive use in export of Agri based chemicals to developing nations such as Vietnam, India & Brazil.

Who are the key players in Europe high density polyethylene jerrycan market?

What are the factors driving the European high density polyethylene jerrycan market?

b. The key factors that are driving the Europe HDPE Jerrycan market include ease of recyclability, ease of handling, and high efficiency during storage. Furthermore, the growing need for convenient packaging systems in numerous applications across the industries will drive demand.