The global extracorporeal membrane oxygenation machine market was valued at USD 281.1 million in 2021 and is expected to expand at a compound annual growth rate (CAGR) of 5.3% during the forecast period. The key driver of the market is the rising incidence of cardiopulmonary diseases and respiratory failures. According to the Centers for Disease Control and Prevention (CDC), an individual dies every 37 seconds from cardiovascular disease in the U.S. Furthermore, chronic obstructive pulmonary disease (COPD) was among the leading cause of death in the U.S. in 2018. The increasing adoption rate of extracorporeal membrane oxygenation (ECMO) has stimulated technological advancement in these systems. The advancement includes the introduction of hollow pumps, oxygenators, and heparin coated cannula used in various applications in surgeries. 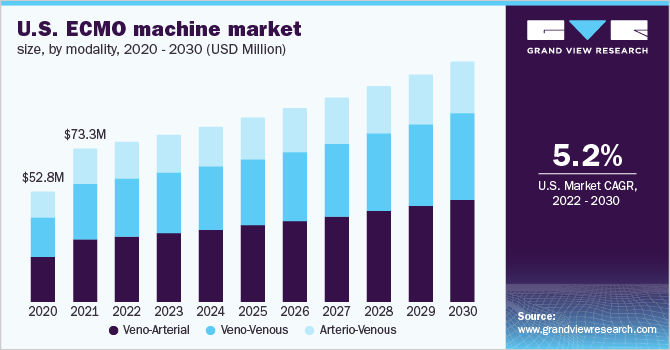 The increasing number of hospitals offering ECMO services and the rising number of awareness programs are some of the factors boosting the market growth. According to the Federal Agency of Health Research and Quality, there were 6890 ECMO procedures were performed in the U.S in 2014. Thereafter, the adoption of extracorporeal membrane oxygenation machine ECMO machines in hospitals has increased significantly. According to the Extracorporeal Life Support Organization (ELSO), the number of hospitals offering ECMO services reached 264 in 2019 up from 108 in 2008.

ECMO devices are being used in the treatment of serious COVID-19 patients. However, other applications of these devices, including heart procedures showed a sharp decline in 2020. Increasing awareness about ECMO procedures and technological advancement is further propelling the market growth. Many government organizations aimed to create awareness about ECMO Procedures. Initiatives such as Global Initiative for Chronic Obstructive Lung Disease (GOLD) aim at creating awareness about COPD along with its treatment, which includes the usage of ECMO devices.

Furthermore, the increasing adoption rate of ECMO machines is catalyzing technological advancement in these systems. The latest advancement includes oxygenators, hollow pumps, and heparin-coated cannula used for various applications in surgeries. In addition, recently developed ECMO machines are smaller in size, thus increasing their portability and applications. Portable adaptors and compact ECMO machine circuits have also been developed which help in the transportation of critically ill patients.

The increasing geriatric population coupled with the increasing incidence of coronary heart disease is boosting the adoption of ECMO machines. Coronary heart disease is strongly associated with age and is one of the leading causes of death worldwide. According to United Nations, the number of people aged 80 years, or more is projected to reach 426 million by 2050 from 143 million in 2019 globally. However, complications associated with ECMO machines such as infections, technical failure, bleeding, and high cost of treatment may hinder the market.

The pumps segment also has considerable market share owing to high cost and usage. The pumps in ECMO machines help pump blood from a patient to artificial lungs that send the blood back to the patient after oxygenation. The growth of the segment is primarily attributed to its high usage of pumps in ECMO procedures and the availability of various types of pumps such as roller, impeller, and centrifugal. These pumps are used in various applications of ECMO procedures according to their need.

The veno-arterial segment accounted for the largest market revenue share of 41.8% in 2021 and is expected to grow at a healthy CAGR during the forecast period. The largest size of the segment is primarily attributed to its high usage in treating patients with cardiac arrest, assisting with algorithm life support strategies to restore blood circulation.

Veno-venous segment captured a significant share in 2021 and is expected to grow at a lucrative growth rate during the forecast period. The primary function of the venovenous ECMO (VV ECMO) circuit is to ease the process of exchange of oxygen and carbon dioxide. Thus, it’s a major application in cases where lung support is needed. The key drivers of the ECMO machine market are the increasing incidence of chronic obstructive pulmonary disease. According to the WHO, there were 251 million cases of COPD globally in 2016 and this number is expected to grow further in the forecast period.

The respiratory segment accounted for the largest market share of 44.0% in 2021. The key market drivers include the increasing prevalence of respiratory disorders and rising awareness of ECMO procedures. According to statistics published by the ELSO, over 2,600 patients suffering from respiratory illnesses in the U.S. underwent ECMO therapy in 2015.

The adult patient segment accounted for the largest market revenue share of 59.0% in 2021 and is also expected to grow at the fastest rate during the forecast period. Consumption of alcohol, tobacco, and smoking coupled with a sedentary lifestyle are increasing the global burden of cardiac and respiratory diseases in adults. According to the report published by the Extracorporeal Life Support Organization, in January 2016, there were around 7,850 adults suffering from cardiac illnesses that required ECMO. 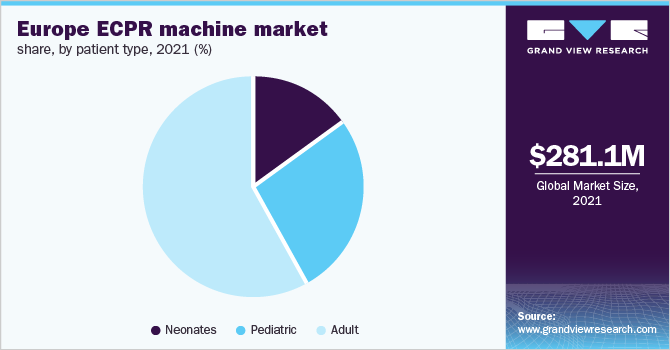 The pediatric segment also accounted for a considerable market share and is expected to grow at a robust pace during the forecast period. The key drivers of the segment are the increasing number of children with various pulmonary heart diseases. According to the Extracorporeal Life Support Organization, in January 2016, around 8,102 children suffered from cardiac illness and required ECMO therapy.

North America dominated the market with a share of around 39.7% in 2021 owing to the presence of major players and product launches. The growth of this market in the region can be attributed to the government support for quality healthcare, high purchasing power parity, and the increasing prevalence of diseases such as chronic obstructive pulmonary disease in the U.S. and Canada. The presence of sophisticated healthcare facilities and favorable reimbursement policies has led to an increased hospital admission rate which in turn is expected to boost the usage rates in this region.

The Asia-Pacific extracorporeal membrane oxygenation market is expected to witness the fastest growth during the forecast period. Key factors driving the growth of this region are the increase in healthcare expenditure by the government and private agencies in order to improve healthcare facilities. Economic development in countries such as Japan, India, and China coupled with rising government initiatives related to the development of healthcare infrastructure and reimbursement policies are further expected to augment the market growth.

This report forecasts revenue growth at the global, regional, & country levels and provides an analysis of the latest industry trends in each of the sub-segments from 2018 to 2030. For the purpose of this study, Grand View Research has segmented the global extracorporeal membrane oxygenation machine market report based on component, modality, patient type, application, and region:

How big is the extracorporeal membrane oxygenation machine market?

What is the extracorporeal membrane oxygenation machine market growth?

b. North America dominated the ECMO machine market with a share of 39.7% in 2021. This is attributable to government support for quality healthcare, high purchasing power parity of patients, and increasing prevalence of diseases such as chronic obstructive pulmonary disease (COPD).

Who are the key players in the extracorporeal membrane oxygenation machine market?

What are the factors driving the extracorporeal membrane oxygenation machine market?

b. Key factors that are driving the ECMO machine market growth include the rising prevalence of cardiopulmonary and respiratory diseases, increasing adoption of ECMO machines in hospitals, technological advancement in ECMO machines, and growing awareness towards the application of ECMO.

Which component accounted for the largest share in the ECMO machine market in 2020?

b. The oxygenator segment accounted for the largest market share of 34.2% in 2021; furthermore, it is expected to show substantial growth in the coming years.

Which application segment accounted for the highest market share in the ECMO machine market in 2020?

b. The respiratory application segment accounted for the largest market share of 44.0% in 2021.

Which modality segment is expected to witness substantial growth in the ECMO machine market over the forecast period?

b. The veno-arterial and veno-venous segments are projected to witness substantial market growth through the forecast period.

With regards to patient type, which segment is projected to show the fastest growth in the ECMO machine market?

b. The adult patient segment is projected to show the fastest growth in terms of the ECMO machine market demand through 2030.

What is the main function of the veno-venous ECMO circuit?

b. The primary function of the veno-venous ECMO circuit is to ease the process of exchange of oxygen and carbon dioxide, thus making it a critical application in lung support cases.