The global fertilizer additives market size was estimated at USD 3.25 billion in 2018 and is expected to grow at a CAGR of 3.1% over the forecast period. The robust growth of the fertilizer industry along with rising population & decreasing per capita arable land is expected to drive the demand. 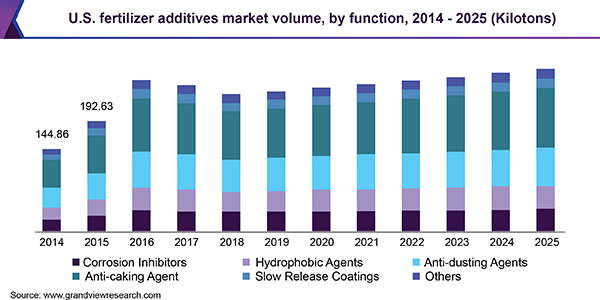 The ability of the product to prevent loss of key nutrients such as phosphorous, sulfur, potassium and nitrogen is expected to augment the growth over the forecast period. Moreover, it is used during transportation and storage of fertilizers to inhibit the caking and corrosion. It is also used to prevent the moisture and lump formation in fertilizers, which are generally caused by the humid climatic condition.

The U.S. is one of the major markets in North America. The country has witnessed a revival in the agricultural sector which has led to the growing demand. The product is most commonly used as an anti-caking agent in the U.S. due to variations in storage temperatures.

The nutrition level of fertilizers is enhanced by the utilization of additives as they help in reducing nitrogen, potassium, sulfur, and phosphorous ion losses caused due to immobilization, denitrification, leaching, and volatilization. Among all additives, nitrogen-based products are considered highly important as nitrogen is a very crucial component for the growth of a plant.

They are mixed with readily available or water-soluble fertilizers which enhances the ability of nitrogen ions to remain in the soil for a longer duration of time. These are added shortly before adding the fertilizer to the soil or during its manufacturing process.

The demand for fertilizer additives depends significantly on the consumption of fertilizers in the agrochemical market. The future growth of fertilizer additives, both from a volumetric perspective as well as a value-based standpoint, is highly dependent on harmonizing agricultural standards across the globe and the indoctrination of novel farming practices among farmers, especially in the economically backward regions of Africa, India, and Latin America. Going by empirical data on agricultural output, it is, highly evident that the rise in food demand is expected to drive the production of food, which, in turn, is likely to generate a demand for fertilizer additives across the industry.

Anti-caking, anti-dusting, corrosion inhibitors, and anti-coating are some of the major functions of the product. The anti-caking function dominated the fertilizer additives market in 2018 as it is observed to be particularly important during monsoon. This is due to the fact that flakes are formed when they are stored during the monsoon season. Safe storage and the transportation of fertilizers is possible by using additives.

Anti-dusting was considered as the second most important function of the product in 2018. Anti-dusting is of utmost importance during the transportation and storage of fertilizers where there is a possibility of them getting exposed to dust.

Hydrophobic agents are also known as water repellents. They do not let moisture in the atmosphere affect the quality of fertilizers. Moisture is said to reduce the content of essential nutrients such as nitrogen, phosphorus, and potassium from fertilizers.

The end-product segment was dominated by urea in 2018. Urea is readily available and can be easily synthesized, making it the most commonly used nitrogenous fertilizer. Urea market is expected to witness growing demand from emerging countries such as India and Brazil. It is characterized by high nitrogen content, which has made it a popular option among farmers. Besides, it is easily available in the market and extensively used by farmers, particularly in the emerging Asia Pacific region.

Ammonium nitrate is one of the major sources of nitrogen because it contains both nitrate and ammonia. It has a high proportion of nutritional content and is cost-effective as compared to other nitrogenous product, which has led to its increased popularity among farmers. It is the second most commonly used nitrogenous product after urea. The popularity of ammonium nitrate has grown significantly in emerging economies of Asia Pacific and Latin America, which are considered to be price-sensitive regions. Growing demand for ammonium nitrate can be attributed to its low price and high nitrogen & ammonium content. 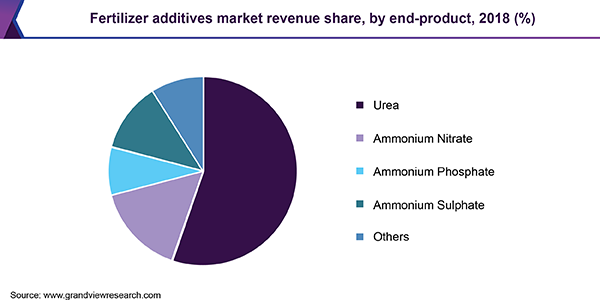 The Asia Pacific market reflects the highest CAGR of 3.3%, in terms of revenue, from 2019 to 2025. The robust growth of the agriculture sector in emerging economies such as China and India are projected to boost the demand for additives over the forecast period. Agriculture is a primary sector and is a major factor in determining the GDP of the economies in this region such as India, China, Bangladesh, and, Sri Lanka.

In Europe, abundant land availability and suitable weather conditions have facilitated the production of multiple crops. European Commission has set various regulations on manufacturing and use of the product. For instance, it is mandatory for the additive manufacturers to take the approval of the active ingredients from the commission before launching a product.

Ongoing research and development in the field of fertilizers have made the market highly consolidated. Leading participants such as KAO Corporation, Novochem Group, Clariant, Solvay, and Filtra Catalysts & Chemicals Ltd are investing in research & development to improve their product offering and acquire a large market share.

The other players such as Forbon Technology, ChemSol LLC, Michelman, Tolsa Group, and Amit Trading Ltd are also trying to expand their presence in the global market by engaging in mergers & acquisitions, collaboration & joint venture and new product development.

This report forecasts revenue growth at a regional & country level and provides an analysis of the industry trends in each of the sub-segments from 2014 to 2025. For the purpose of this study, Grand View Research, Inc. has segmented the fertilizer additives market report on the basis of function, end-product and country:

How big is the fertilizer additives market?

What is the fertilizer additives market growth?

Which segment accounted for the largest fertilizer additives market share?

b. Asia Pacific dominated the fertilizer additives market with a share of 59.5% in 2019. This is attributable to robust growth of agriculture sector in emerging economies such as China and India .

Who are the key players in fertilizer additives market?

What are the factors driving the fertilizer additives market?

b. Key factors that are driving the market growth include robust growth of fertilizer industry along with rising population & decreasing per capita arable land.