The global fire alarm and detection market size was estimated at USD 39.23 billion in 2019 and is anticipated to witness a CAGR of 8.4% from 2020 to 2027. Increasing demand for advanced smoke detection systems for fire-prone industries including energy and power, oil and gas exploration, petrochemical, manufacturing, mining, utilities, construction, and automotive is anticipated to upkeep market growth over the forecast period.

Besides, the improvement in the construction industry and the subsequent development of infrastructure in developed and emerging economies has fostered the industry. The implementation of smoke alarm and detection system has improved the safety quotient for various structures. Furthermore, with the technological development, the introduction of the wireless and addressable system has been the key to the improvement in the response time and has also assisted in reducing the false alarm frequency. 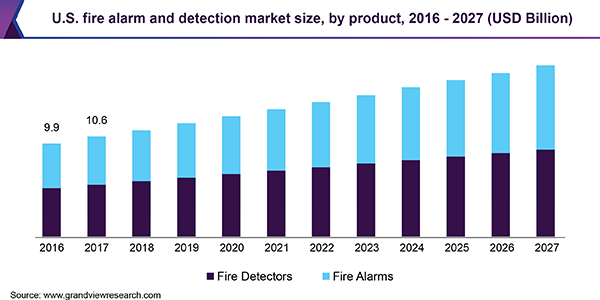 Additionally, one of the key factors contributing towards market growth is the increasing stringency in the adoption of fire safety regulations within residential, commercial, and industrial applications. Various countries in regions including Europe, Asia Pacific, and North America have implemented stringent fire safety and security norms, which mandate the installation of smoke alarm and detection system in commercial, residential, and industrial places. For instance, in Japan, the Building Standards Law and Fire Services Law; in China, the Code of Design for Building Fire Protection and Prevention for the purpose of protecting the humans and maintaining the public safety, reducing the damage, preventing the disasters, and property safety. Such strict implementation and mandate of fire codes and standards across countries is anticipated to fuel market growth over the forecast period.

Moreover, the prominent factor driving growth prospects for the market is the rising initiative taken by various fire departments to create awareness regarding safety. For instance, in October 2019, Melrose Domino’s, NFPA, and Stoneham Fire Department have partnered to create awareness regarding the need for fire protection devices and promote safety. Additionally, the increased fire protection expenditure, especially from consumers located in developing economies along with the reduction in prices of smoke protection solutions, has stimulated the growth of the industry. Additionally, technological advancements such as wireless alarm systems, water mist technology, smoke detection system, and the addition of integrating smoke detection devices into building management would be the key factors behind the growing demand for fire alarms and detection systems.

The fire safety industry has amplified its effort towards increasing the stringency of safety standards and codes. It has enforced various value chain members in developing intelligent components and robust systems such as the wireless and the addressable system. The technologically advanced regions including North America and Europe have seen a steady demand for smoke alarm and detection systems from 2016 to 2018 owing to the strict implementation of fire safety codes and standards, which is projected to stimulate the growth trend over the next few years. Whereas, some of the developing economies owing to lack of stringency in regulation and high costs are yet to witness the upsurge in demand for smoke alarm and detection system. Besides, improving economic conditions and fast paced construction industry in countries such as Brazil and India is projected to boost the market over the forecast period.

By product, the fire alarm and detection market is segmented into fire alarms and fire detectors. Fire detectors dominated the segment in 2019 and was valued at USD 20.0 billion. Fire detectors are particularly designed for detecting any type of fire, gas leak, smoke, and heat, which can cause a big accident. The stringent regulations by several countries regarding the installation of the smoke detectors for the early detection of fire accidents is one of the major factors driving the segment.

The fire alarms segment is anticipated to exhibit a CAGR of 8.6% from 2020 to 2027 owing to several advancements in fire alarm & detection system. Addition of speakers in existing smoke alarm and detection systems to support voice evacuation is expected to provide ample growth opportunities for the manufacturers and system integrators operating within the market space. The installation of smoke detection alarm improves the safety quotient for various building structures especially the high-rise buildings.

Furthermore, with the significant investments focusing on technological advancements, the introduction of addressable and wireless communication system has reduced the possibility of false alarms and has been a key to progress in the response time. For instance, in January 2020, Gent’s Response Plus paging solution was integrated with Honeywell’s Vigilon fire alarm & detection system at a school premises. The solution is expected to reduce the response time by alerting the school care takers and authorities with instant fire hazard notifications and nearest location details. Hence, the upgradation in fire alarm & detection systems is anticipated to improve safety, which in turn, would increase its demand across various sectors.

The fire detectors market has been further segmented by type into heat, smoke, and flame detectors. Smoke can be detected either physically i.e. ionization method or optically i.e. photoelectric method. These smoke detection systems are used in auditoriums, entertainment malls, corporate buildings, residential buildings, and other public spaces. Hence, smoke detectors dominated the fire detector segment in 2019; as they are being used progressively in the commercial and residential buildings owing to their long lifespan and cost-effectiveness.

The fire alarms segment has been further segmented by type into audible alarms, visual alarms, and manual call-points. Audible alarms are activated by toxic fumes, smoke, heat, or break-in into home, and warn of imminent danger using sound as a medium. Audible alarms dominated the segment in 2019 owing to increasing demand for voice alarm systems coupled with public address systems. Moreover, the growing adoption of PAVA systems across commercial buildings is further anticipated to fuel segment growth over the forecast period.

By application, the market is segmented into industrial, commercial, and residential applications. The commercial segment includes application areas across telecom and IT, institutional, retail, healthcare, BFSI, government, and hospitality sectors. The segment dominated the market in 2019 and is projected to continue the trend over the forecast period. It accounted for over 44% share of the overall market revenue in 2019. 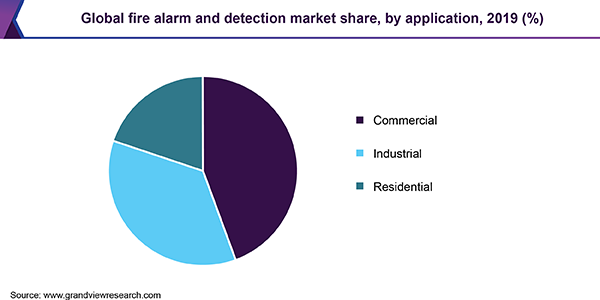 Moreover, the continuous increase in the application and usage of smoke detection products in corporates and commercial entities has led to an additional emphasis on safety and security of people as well as infrastructure. Numerous state governments in India have mandated the need for proper safety adequacy and installation especially in commercial establishments. All such factors have led to an increase in the demand for smoke detection system in the commercial sector. Furthermore, increasing consumer spending on safety and security against hazards and increase in investments in residential construction sector in emerging economies including India and China is expected to boost the growth of residential sector in the Asia Pacific region.

In North America, the market was valued at USD 14.1 billion in 2019. U.S. has considerably contributed towards smoke detection system to ensure the risk of fire accidents. The market growth of the region is owing to the implementation of stringent safety regulations and norms and the booming infrastructural developments. Besides, North America also hosts the presence of major fire alarm and detection system manufacturers namely Emerson; Honeywell International Inc.; Fike Corporation; and Gentex Corporation. These players are actively involved in spreading the awareness regarding safety and security, hence influencing the market over the forecast period.

However, Asia Pacific is poised to witness a considerable high CAGR of 11.8% from 2020 to 2027. The region is likely to emerge with significant opportunities owing to the high level manufacturing of fire detection products and the presence of sensor manufacturing companies. The growth in this region is also driven by industrial activities and rapid urbanization in emerging nations such as China, Japan, and India. Hence, the steady increase the residential and commercial construction activities in the region is likely to drive the market.

The conscious efforts from various fire alarm and detection systems manufacturers, integrators, and dealers have enabled in creating a widespread awareness among end-users. The players have launched numerous fire safety programs to increase the awareness regarding the benefits of a fire protection system. It has enabled the players to draw the attention of small and medium enterprises (SMEs) as well. Thus, paving the path for the market to grow steadily over the next few years.

This report forecasts revenue growth at global, regional, and country levels and provides an analysis of the latest industry trends in each of the sub-segments from 2016 to 2027. For this study, Grand View Research has segmented the global fire alarm and detection market based on product, type, application, and region: