The global flat glass coatings market size was estimated at USD 1.03 billion in 2017. It is projected to expand at a CAGR of 20.2% from 2018 to 2025. Flat glass is widely used in construction of commercial and residential buildings. Tremendous infrastructural developments across various emerging economies are likely to contribute essentially to demand for flat glass coatings during the forecast period.

Acrylic resin was estimated as the largest market for flat glass coatings globally, with a revenue share of 40.2% in 2017. The polyurethane (PU) resin segment is projected to be the fastest growing segment from 2018 to 2025.

Polyurethane resin is anticipated to witness the fastest CAGR over the analysis period. PU resin based flat glass coatings are used extensively in solar panels, greenhouses, and other architectural systems. PU resins are utilized as finishing coats and are primarily applied over the intermediate and primer coats to attain a long term high performance coverage. 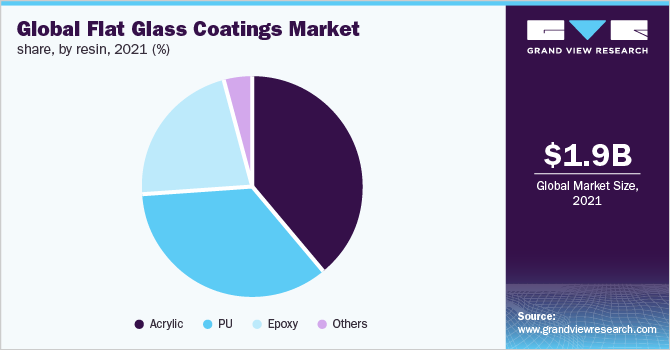 Acrylic resin based product has been growing both in terms of value and volume. Bio based acrylic resins are among the major market drivers as there is a huge demand for environment-friendly products. Rapid urbanization and industrialization have led to an increase in construction spending in emerging nations. This has resulted in high demand from architectural and industrial sectors.

Water-based was estimated as the largest technology segment in 2017. Water-based has numerous added advantages over solvent-based coating technology. Solvent-based coatings possess harmful Volatile Organic Compounds (VOCs), which are emitted into the environment. As a result, regulatory authorities have laid several stringent regulations for manufacturers.

Nano-based flat glass coatings have witnessed significant growth over the past few years on account of numerous research and development activities coupled with expanding consumer needs. Favorable growth in automotive and electronics manufacturing is expected to contribute significantly towards the demand in near future.

Mirror was estimated as the largest application segment of the flat glass coatings market in 2017. Mirrors are used widely across applications in beauty, architectural, automotive, and decorative applications. Moreover, growing demand for smart mirrors is likely to drive the market over the forecast period. Smart mirrors act as an effective substitute for rear-view mirrors in automobile applications. They offer integrated GPS navigation, backup camera, and Bluetooth connectivity which aids effectively in driving the vehicle.

Asia Pacific was estimated to be the largest regional market in 2017. Already developed regional economies such as China, Australia, South Korea, and Japan are anticipated to be the major contributors to the regional demand. Developing automobile and construction industry is expected to be the major factors driving demand for these products over the forecast period.

North America is expected to drive the market on account of growing construction sector primarily in the U.S. and Mexico. Under the National Infrastructural Plan of Mexico, the government planned an investment of USD 590 billion from 2014 to 2018. This is anticipated to promote construction for residential and commercial structures. Population growth, urbanization, and rising disposable income in Mexico are expected to play important regional growth drivers.

The global market is highly competitive with the existence of key participants such as Arkema Inc.; Fenzi Spa; Ferro Corporation; Hesse Gmbh & Co. Kg; Dow Corning; and PPG Industries. Product innovation is likely to open up new opportunities over the next few years. This is also expected to impel overall competitiveness as manufacturers are striving to increase their production capacities and product portfolios.

This report forecasts revenue and volume growth at global, regional, country levels and provides an analysis of the latest industry trends in each of the sub-segments from 2014 to 2025. For the purpose of this study, Grand View Research has segmented the global flat glass coatings market report on the basis of resin, technology, application, and region: