The global flat steel market size was valued at USD 741.00 billion in 2016. Massive use in construction, automotive, and mechanical equipment is expected to elevate the demand in the market.

The iron and steel industry is considered as the backbone of the economy portraying the performance and development of the country. It is the most extensively used and recyclable material on earth. GDP growth of an economy significantly depends upon the industrialization in that region. Rapid industrialization in developing economies is likely to facilitate an increase in demand from several consumer products.

Rapid urbanization, growing industrialization, rising level of disposable income of middle-class families in emerging economies, and growing global population is projected to be the major market driver for the industry. In India, more than 25.0% of the total investment has been made in infrastructure since 2012. This trend is expected to grow over the coming years, thereby having a positive impact on the industry.

The price of iron ore is very volatile due to the replacement of the annual benchmark pricing system with a quarterly pricing system. With such a pricing system, raw material producers targeted to gain full benefits of the upper spot price of raw material rather than limited by annual contracts which are anticipated to restrain the market growth. Prices of raw materials are generally based on the key players operating in the flat steel market, which is likely to affect the production process in the coming years.

Flat products are supplied through direct supply agreements or third-party supply agreements. Many of the manufacturers adopt the forward integration technique which enables them to sell their products directly to their customers. Companies such as Tata Steel Limited and Essar have their distribution channel.

Manufacturers continue to face significant trade challenges from foreign government trade-distorting policies and practices. Emissions controls for the iron production process are more than six times as strict in the U.S. compared to China. A more aggressive U.S. trade policy is needed to combat these foreign trade-distorting practices to preserve and strengthen the nation’s manufacturing base

Sheets & strips accounted for the largest market share of 63.2% in 2016. It can be made from different types of materials including carbon, alloy, stainless, and tool depending on the applications. These are used in industrial applications, architecture, and transport industries on account of its benefits such as corrosion-resistant, good adhesive & welding properties, lightweight and strong

The steel plates are generally more than 3/16 inch thick and are produced on either discrete plate mill or a coiled plate mill. Special plates including low-alloy, heat-treated and high strength are designed for a particular application such as logging equipment and mining.

Demand for carbon flat products from end-use industries is expected to rise due to its advantages compared to other materials such as resistance to shock & corrosion, cost efficiency, environment friendly, and safety. Major growing end-use industries of carbon steel such as automotive and construction is likely to drive the utilization over the next eight years. 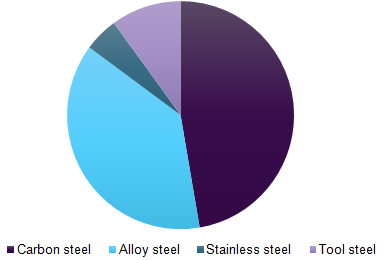 Alloy segments accounted for 37.8% share, in terms of revenue, in 2016. The use of the material in the automotive and mechanical equipment industry is expected to grow due to the presence of different materials and metals to improve their properties. The presence of chromium, nickel, molybdenum, and silicon makes it more important for the automotive and machinery sector.

Stainless steel has advantageous properties when compared to other materials such as higher cryogenic toughness, higher hot strength, higher corrosion resistance, higher ductility, more attractive appearance, higher strength and hardness, and lower maintenance. Such properties of the material are expected to develop new opportunities for its utilization in structural components of vehicles.

The automobile and other transport segments accounted for a share of 48.3%, in terms of revenue in 2016. The application of flat products has allowed automobile producers to achieve anticipated standards of strength and protection for their vehicles at comparatively low costs when compared with other materials. However, the rising focus towards fuel efficiency and weight reduction of automobiles is expected to limit the market growth in automotive applications over the forecast period.

Demand for flat steel products in the building & infrastructure application segment is expected to at the fastest CAGR of 3.8%, in terms of volume, from 2017 to 2025 on account of its high mechanical strength, toughness, and weldability. Excellent features of carbon steel based cold rolled, hot rolled, and galvanized flat products make it suitable for the construction of light as well as heavy components.

Iron & steel makes up about 70.0% of an automobile’s weight. According to the World Steel Association estimates, the automotive sector accounts for almost 12.0% of global steel consumption. ArcelorMittal is one of the key producers of automotive steel.

ArcelorMittal accounted for about 16.7% of the global automotive sheet market in 2014. However, the penetration of flat products in automotive & other transport application segment due to the replacement of the product with other lightweight materials to improve fuel efficiency.

The North American market is valued at USD 86.31 billion in 2016. Construction applications accounted for about 49.43% of the market. In North America, the construction industry is expected to grow on account of massive investment opportunities in the U.S. and Canada.

Europe was the third major market accounting for a revenue share of 18.6% in 2016. Rising demand for flat products owing to growing industries such as construction, automotive, transportation, and machinery industry in developed countries including Germany and the UK is expected to drive the market demand. In 2016, Germany's flat products export volume was 13.1 million metric tons, which was more than 50.0% of the country’s total steel exports.

The industrial outlook in Europe remains controlled by constant macroeconomic uncertainties. Although Europe has witnessed economic imbalances in the past few years, the situation is expected to stabilize over the coming years. Numerous companies in Germany have made long term investments in inland waterway and rail infrastructure. Such investments are expected to boost market demand over the forecast period

The Asia Pacific is the fastest-growing market for flat products. Countries such as China, India, and Japan are expected to witness high growth rates owing to rising demand from the large population. China was the world’s largest steel exporter in 2016; flat products accounted for 42.0% (44.9 million metric tons) of the total exports.

The industry is highly competitive with the presence of a large number of multinational manufacturers operating their businesses through high production volumes. The companies in the global market are highly integrated from the production of flat steel products to the sales and distribution to various locations.

Companies such as Tata Steel Limited, ArcelorMittal, United States Steel Corporation, and Voestalpine Group operate their business through extremely high production capacities spread across the globe. Distribution channels cater to the local as well as global demand and the market has witnessed a high volume of cross-border trade.

This report forecasts revenue growth at global, regional & country levels and provides an analysis of the market trends in each of the sub-markets from 2014 to 2025. For this study, Grand View Research has segmented the flat steel market based on the product, material, application, and region: